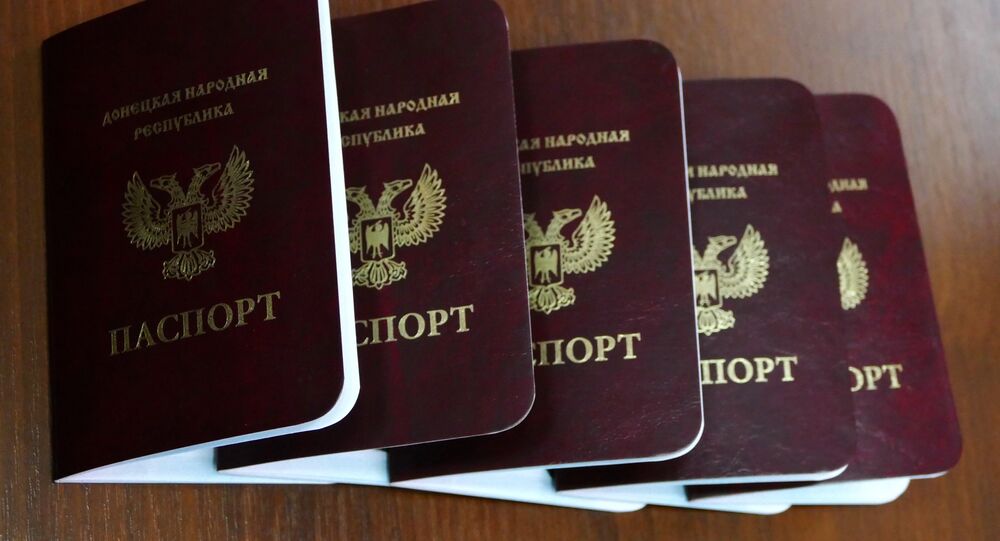 Russian President Vladimir Putin's decree on the recognition of the passports of the Donetsk and Lugansk People's republics (DPR and LPR) does not run counter to the Minsk agreements, Kremlin spokesman Dmitry Peskov said Monday.

MOSCOW (Sputnik) — On Saturday, Putin signed a decree to recognize in Russia documents issued to Ukrainian citizens and persons without citizenship living in certain areas of the Donetsk and Lugansk regions of Ukraine, until the situation in these areas is politically settled.

"The decree does not in any way run counter to international law and does not lead to breaches of international law. You know that this is actually a de jure leveling of the situation and of the de facto recognition. It is necessary to do that for humanitarian reasons," Peskov told reporters.

© Sputnik / Kirill Kallinikov
'I'd Rather Starve': Actor Taktarov Turns Down Hollywood Offer to Play Russian Villain in Donbass
In February 2015, Kiev forces and Donbass independence supporters signed a peace agreement in the Belarusian capital of Minsk. The deal stipulates a full ceasefire, weapons withdrawal from the line of contact in Donbass, as well as constitutional reforms that would give a special status to the Donetsk and Lugansk People's Republics. Despite the agreement, the ceasefire regime is regularly violated, with both sides accusing each other of multiple breaches, undermining the terms of the accord.

After the eruption of the crisis, over a million of Donbass residents applied for a refugee status and temporary shelter in Russia. According to Russia's Federal Migration Service, more than 1 million people fled to Russia following the outbreak of the civil war in Ukraine, of whom approximately 600,000 decided to settle there permanently.

At Least 4,334 Killed in Donetsk People's Republic Since 2014 - Defense Ministry