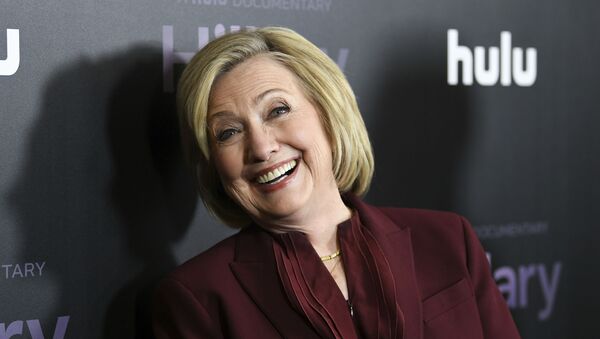 © AP Photo / Evan Agostini/Invision
Subscribe
Failed 2016 Democratic presidential candidate Hillary Clinton, who has publicly endorsed Joe Biden as the presumptive rival set to face off against Donald Trump in the November election, earlier said she was doing “everything” she can to not let the current incumbent remain in the White House for another four years.

Hillary Clinton took a jab at Donald Trump on Tuesday, suggesting that if she held his post she would have handled the COVID-19 pandemic differently, and prevented it from reaching its current proportions in the US.

Clinton, who had lost the race to the White House against Trump in 2016, tweeted that she would have “read her intelligence briefs about coronavirus”.

I would have read my damn briefs, Barbra, that's for sure. https://t.co/YSZS0Lvqo9

​The former First Lady was responding to a three-part Twitter thread on Monday by celebrated Broadway star Barbra Streisand, who queried how Hillary Clinton, “a woman with a powerful mind”, would have handled the coronavirus pandemic.

The singer had suggested that as a mother and grandmother, Clinton would have sought to “instinctively taken care of the public health of the people of the United States”.

Can you imagine how President Hillary Clinton - a Woman with a powerful mind - would have handled this pandemic?

Being a mother and grandmother, she would’ve instinctively taken care of the public health of the people of the United States.

​Winner of multiple Grammy Awards, Streisand mocked Donald Trump, who has been slammed for his handling of the coronavirus epidemic, scornfully stating that he “holds our lives in his very small hands”.

Netizens were quick to swoop in on the former Secretary of State from Barack Obama’s administration, reminding her of her handling of the response to the deadly attack on a US mission in Benghazi, Libya, on 11 September 2012 which left ambassador Chris Stevens and three other American diplomatic staff dead.

At the time Clinton had been pressed on why cables and memos about security deficiencies in Benghazi seemed to have been ignored.

Would you have read the damn emails like you did the Benghazi emails? https://t.co/5uWNiC3scf

No, you would have rolled over and gone back to bed like you did when you were informed that the US embassy in Libya was being torched to the ground.

Ha, speak for yourself! #BeenThereDoneThat

What about your damn brief on embassy security in Libya? Did you read that one?

You know she didn't read a damn thing.

​Many made reference to the Hillary Clinton email scandal.

How can you find them.... they're in your emails.

Is she still relevant?

​Trump supporters mocked Clinton’s presidential aspirations, as they expressed certainty that the current incumbent would be reelected in November.

Your desperation is showing 😂 pic.twitter.com/EJlwCPih8t

You also would’ve financially gutted this country and dispersed all of our hard working American taxpayer dollars around the globe, bankrupting America.

Where is the $6 billion you lost while you were in the State Department?

The problem Hillary is that YOU ARENT PRESIDENT! WE DIDNT WANT YOU AND STILL DONT WANT YOU!

Haven't seen one Trump voter who has regretted it yet!! Trump 2020!!

Stock up on tissues you're gonna need them this election

​Some on twitter deplored the fact that Hillary Clinton lost the election to Donald Trump in 2016.

We mourn everyday that you're not in the White House instead of this criminal.

We still mourn a lot of the evil she has done and seems to have a Teflon protection as she never is held accountable.

​Former Secretary of State Hillary Clinton earlier said she was doing “everything” she can to not let Donald Trump stay in the White House for another four years, as she joined comedian Amy Schumer in a Zoom conversation for Variety.

“I’m spending most of my time trying to do everything I can to retire him, and to send him back to the golf course full-time,” said the former first lady.

US President Donald Trump has been taking the flack for allegedly downplaying the coronavirus threat.

His critics cite reports claiming that the president had received intelligence briefings on the fast-spreading COVID-19 virus as early as January.

Trump has since dismissed the allegations, insisting that his intelligence community did not inform him of the threat until later in January, adding that “they only spoke of it in a very non-threatening, or matter of fact, manner.”

000000
Popular comments
She is another stupid person with royal ambitions. She was poor but got rich under the political umbrella of another prat man, who was convinced by the 'catholic' Tony Blair to bomb Yugoslavia Serbia.