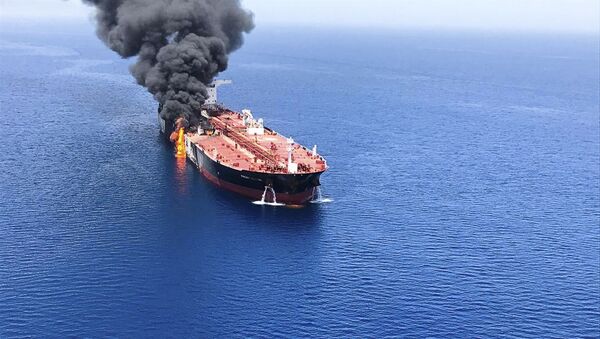 The development comes shortly after Britain's ambassador to Iran, Rob Macaire, denied reports that he had been summoned by the Iranian Foreign Ministry in the wake of London accusing Tehran of attacking two oil tankers in the Gulf of Oman on 13 June.

The BBC has cited Britain's Foreign Secretary Jeremy Hunt as claiming that the UK has done its "own intelligence assessment", which showed that Iran was "almost certainly" behind the oil tanker attacks in the Gulf of Oman.

"We have done our own intelligence assessment and the phrase we used is almost certain... We don't believe anyone else could have done this", he said.

Hunt, who previously claimed that Iran's Islamic Revolutionary Guard Corps (IRGC), designated as a terrorist group by the US, was "almost certainly" responsible for the attacks, also urged all sides to de-escalate.

Meanwhile, Russian presidential spokesperson Dmitry Peskov said on Sunday that the situation in the Gulf of Oman was potentially dangerous for the world economy, and urged to ignore "unfounded finger pointing".

Hunt's allegations come shortly after the United States accused Iran of targeting the vessels on 13 June, with the US CENTCOM releasing video "proof" claiming to show Iranian sailors removing an unexploded mine from the hull of one of the tankers.

In a parallel development, UK ambassador to Iran Rob Macaire took to Twitter to brush off reports that he had been summoned by the Iranian Foreign Ministry over London's accusations and said that he had asked for "an urgent meeting" himself:

Interesting. And news to me. I asked for an urgent meeting with the Foreign Ministry yesterday and it was granted. No ‘summons’. Of course if formally summoned I would always respond, as would all Ambassadors.

Washington's version of events was rejected by Yutaka Katada, the president of the Japanese company operating the tanker Kokuka Courageous, who told the Japanese media that the ship’s crew had spotted a flying object ahead of the blast.

"I do not think there was a time bomb or an object attached to the side of the ship. A mine doesn’t damage a ship above sea level. We aren’t sure exactly what hit, but it was something flying towards the ship", Katada was cited as saying.

German Foreign Minister Heiko Maas has as well noted that the footage was insufficient to substantiate the US claims.

Tehran has strongly denied its involvement, calling on Washington to stop the "blame game" and cease false flag operations in the region.

On 13 June, the Panama-registered Kokuka Courageous, operated by Japan's Kokuka Sangyo Co, and Marshall Islands-flagged Front Altair, owned by Norway's Frontlone, were hit by explosions in the Gulf of Oman. At the time, the Japanese Trade Ministry stated that both ships were carrying "Japan-related cargo".

US Secretary of State Mike Pompeo appeared to be the first to accuse Tehran of orchestrating the attacks - something which prompted CENTCOM to deploy a US Navy destroyer to the scene to "provide assistance".

The accusations were harshly slammed by Iran's Foreign Minister Javad Zarif, who described Washington's moves as part of "sabotage diplomacy".

The 13 June incident followed a similar episode last month, when four oil tankers - two Saudi, one Emirati, and one Norwegian - were targeted near a UAE port in what Abu Dhabi described as "acts of sabotage". The US accused Iran of those attacks as well, while Tehran has flatly denied the allegations.