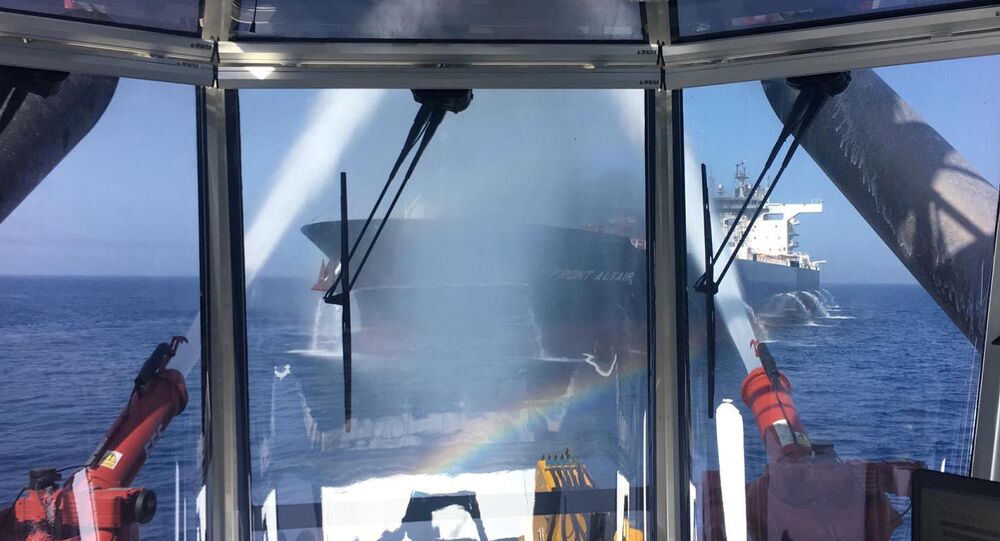 'Not Enough': US Version Blaming Iran for Tanker Attacks Questioned by European Allies

The Pentagon earlier released a video, claiming to show an Iranian patrol boat removing a mine from the side one of the tankers targeted in the Gulf of Oman as "proof" of the US accusations that Tehran is behind the attacks. The Islamic Republic has strongly denied its involvement and urged Washington to stop false flag ops in the region.

Some European governments have refused to back the US allegations that Iran was responsible for the attacks on two oil tankers in the Gulf of Oman on 13 June.

German Foreign Minister Heiko Maas has, for instance, insisted that the footage made public by the US Central Command allegedly showing Iranian sailors removing an unexploded mine from one of the vessels' hull was insufficient to corrobotate Washington's claims.

"The video is not enough. We can understand what is being shown, sure, but to make a final assessment, this is not enough for me", Maas told reporters on Friday.

His point of view was stongly supported by Nathalie Tocci, a senior adviser to EU foreign policy chief Federica Mogherini, who has likewise stressed that before blaming someone, "we need credible evidence".

The United States' second ally, France, was reluctant to take sides: it did condemn the attack, but refrained from saying whether it had looked into the US intelligence, any other evidence, or assessed CENTCOM's video.

Meanwhile, the president of the Japanese company operating the tanker Kokuka Courageous, Yutaka Katada, has fended off the US narrative in comments to local media, saying that the vessel's crew spotted a flying object before the explosion occurred:

While some European nations try to distance themselves from Washington's version of events, the UK government has backed up the US assessment, with Foreign Secretary Jeremy Hunt saying that the Islamic Revolutionary Guard Corps (IRGC), designated as a terrorist group by the Trump administration, was "almost certainly" behind the incident. Hunt as well called on Iran to "cease all forms of destabilising activity".

In a Friday interview with Fox News, US President Donald Trump insisted that Iran was responsible for the blasts that hit the two vessels, and maintained that the video released by CENTCOM proved Tehran's guilt.

On 13 June, two oil tankers, Panama-registered Kokuka Courageous and Marshall Islands-flagged Front Altair, owned by Norway's Frontline, were attacked in the Gulf of Oman. The Japanese Trade Ministry said in a statement that both vessels were carrying "Japan-related cargo". Multiple news outlets have reported that the ships were subjected to torpedoes, which triggered blasts and a fire on at least one of them.

Shortly after the incident, US Secretary of State Mike Pompeo was the first to accuse Tehran of being behind the attacks, which, in turn, prompted US Central Command to send the US Navy destroyer USS Mason to the scene to "provide assistance".

Iran's Foreign Minister Mohammad Javad Zarif has slammed Washington's allegations as part of "sabotage diplomacy", while the Iranian mission to the UN has called on the United States and its regional allies to stop "warmongering" and cease false flag operations in the Middle East.

The state-run news agency IRNA also reported that Iranian boats had helped to evacuate the tankers' crews, taking them to the port of Jask after the incident.

The Thursday incident follows another episode in May, when four oil tankers were targeted near a UAE port in what Abu Dhabi described as "acts of sabotage". The US accused Iran of being behind these attacks as well, while Tehran has denied the allegations.