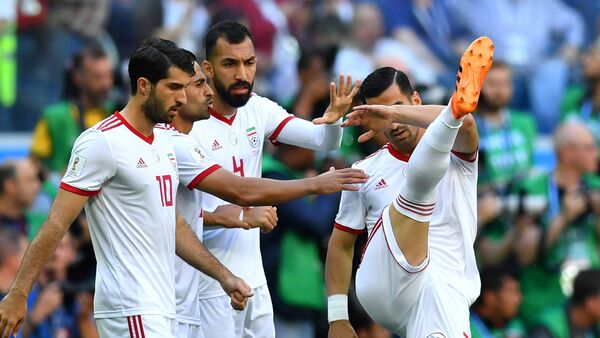 The footballers, representing the Islamic republic at the 2018 FIFA World Cup, were entangled in political games ahead of the opening game after Nike denied to supply them with boots following US President Donald Trump's decision to reinstate sanctions against Tehran.

Before their victorious opening match against Morocco at the 2018 FIFA World Cup in Russia, Iranian footballers, who are used to wearing boots produced by Nike, allegedly had an unplanned shopping session once they arrived in Russia. Although the US sportswear brand rejected to provide the team with their boots, following US President Donald Trump's decision to reinstate sanctions against Tehran, some players still showed up wearing Nike boots to the game, which ended 1:0 in favor of the Islamic republic.

The rest of the team's uniform wasn't impacted since it is equipped with Adidas jerseys, purchased by the Islamic republic, since the German company doesn’t officially sponsor the country’s footballers.

The move frustrated the Iranian football federation and angered their head coach, Carlos Queiroz, who slammed Nike over its rejection to supply the team with footwear just days before the opening game. Queiroz told Sky Sports that Nike should apologizes for its “ridiculous” conduct.

Queiroz pointed out that players get used to their equipment, and according to him, “It's not right to change them a week before such important matches.”

In a press statement, Nike voiced its commitment to obeying the imposed legislation.

"US sanctions mean that, as a US company, Nike cannot provide shoes to players in the Iranian national team at this time. Sanctions applicable to Nike have been in place for many years and are enforceable by law,” Nike said in a statement as quoted by ESPN.

The firm, however, had previously supplied the Iranian team with boots despite the sanctions, for example, during the 2014 World Cup.

Nike’s decision was based on Trump's call to withdraw from the 2015 Joint Comprehensive Plan of Action, or the Iranian nuclear deal, in May. US President Donald Trump said Washington would re-introduce the US sanctions against the Islamic republic, while the remaining parties of the agreement – China, France, Germany, Russia, the United Kingdom, and the European Union – said they were committed to preserving the deal.

The official sanctions against Iran are set to kick off within six months of the president’s decision on May 8 to withdraw from the agreement. It was reported that the US Department of the Treasury, which is accountable for implementing financial sanctions on Iran, can charge a person who violates the sanctions with criminal penalties of up to $1 million and 20 years in prison, according to the department's website.