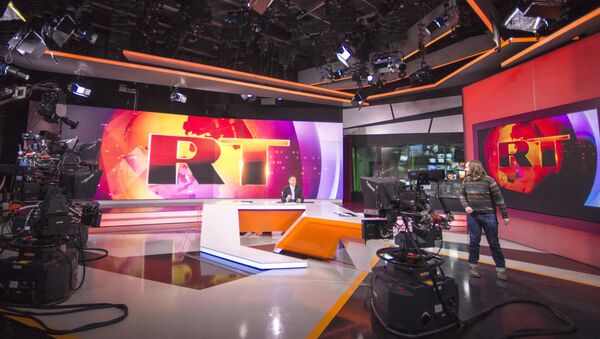 © Sputnik / Evgeny Biyatov
/
Go to the mediabank
Subscribe
International
India
Africa
UK Defense Secretary Sir Michael Fallon has accused Russia, and Sputnik News, of "weaponizing misinformation" to create a "post-truth age" in a sustained campaign of destabilization against NATO and the West. Evidence for this alleged campaign was predictably lacking – as was evidence a "truth age" ever actually existed in Western politics.

Speaking at St. Andrews University in Scotland, Sir Michael Fallon accused Russia of using cyberattacks to "disrupt critical infrastructure and disable democratic machinery." Describing a "persistent pattern of behavior" on the part of Russia, he reeled off a by-now dully over-familiar list of alleged Kremlin meddling in the affairs of other nations, including the 2016 election in Montenegro, and the Netherlands referendum on the EU-Ukraine treaty.

The Defense Secretary, who claims to have seen no evidence Saudi Arabia purposely targets civilians in the Yemeni civil war, despite mountains of evidence to the contrary, could even detect Russian intrusion in events that haven't happened yet — namely, the September 2017 federal election in Germany.

However, Mr. Fallon mercifully stopped short of charging Russia with "hacking" the DNC emails, which may be an indication the UK political class has finally caught up with former President Barack Obama, who stated in his final presidential press conference that US intelligence agencies did not have any evidence to suggest Russia provided WikiLeaks with the emails, and also specifically referred to them as "leaked" as opposed to "hacked."

To Michael Fallon on "false reality":blaming Russia for mistrust of elites. It wasn’t us who have tried to avoid change in West at any cost pic.twitter.com/TwGHwK0Z9u

The Brexit referendum was also absent from his catalogue of baseless indictments, possibly a further signal that Ben Bradshaw's theory — for which the MP himself admitted he had zero evidence — has failed to catch on (given the reception Mr. Bradshaw's paranoid theorizing received from the House of Commons, that's perhaps understandable).

Ghosts of Soviet Propaganda: MPs Sneer at Claim of Russian Hand in Brexit
Evidently, the omnipotent Russians aren't covertly responsible for absolutely everything that doesn't go the Western elites' way — although Mr. Fallon was clear that in an ongoing effort to "weaponize" information, the Kremlin was responsible for the "post-truth age" we now allegedly live in. This was primarily achieved, he said, by the news reporting of Russia Today and Sputnik News, which exist to disseminate "Soviet-style misinformation."

While staff at both outlets are no doubt supremely flattered by the notion they are powerful enough to shape a very era, especially given their comparatively miniscule share of the media market, critics may balk at the idea of a "post-truth age" — after all, such phraseology by definition suggests there was once a "truth age" in Western media and politics.

For all the talk of fake news in recent months, few have stopped to consider whether the Western media — typically profit-maximizing businesses, owned by 1 percenter magnates, which depend almost entirely on advertising revenue to keep their lights on and information from state and corporate sources to fill their pages — is itself capable of reporting honestly on world affairs.

Michael Fallon is a dangerous man — he keeps hinting without evidence that we have an enemy when the greatest danger is his govt.

As reporting on the Syrian civil war and Venezuelan politics surely attests, to name but two contemporaneous examples, media coverage that emerges out of such a structure is by and large fake news. Academic studies of reporting on a vast array of issues, including climate change, the financial crisis and the Israel-Palestine conflict, consistently conclude the mainstream media support elite narratives, and barely feature dissenting views.

Moreover, Western governments have long sought to "weaponize" information, often with catastrophic results. Reports of Iraq's weapons of mass destruction, which helped galvanize public support for the potentially illegal 2003 invasion, flowed directly from Britain's MI6. The intelligence service, under the auspices of "Operation Mass Appeal," fed reporters knowingly false stories, which would be "joyfully" leaped on as "free copy" and then uncritically regurgitated.

The Culture, Media and Sport Committee have launched an inquiry into #FakeNews. Find out more here: https://t.co/XOLMkLJIdn pic.twitter.com/VOcE5MFv9i

What prompted Mr. Fallon's broadside against Moscow and its all-pervading hidden hand isn't clear. It could be that he intended to do some informational "weaponizing" of his own — after all, he suggested Britain and its allies should carry out their own cyberattacks against Russia in "retaliation."

Alternatively, the conclusion of his speech may offer some clues as to his true motivations. Noting Russia under Vladimir Putin had become a "strategic competitor" to the West, the Defense Secretary said it was in the UK's and Europe's interests to "keep NATO strong and deter and dissuade Russia from this course," recalling the words of NATO's first Secretary General Lord Ismay, who said the purpose of the alliance was to:

"…keep the Russians out, the Americans in, and the Germans down."

Sir Fallon's comments are surely representative of the views of many members of the Western elite, who wish to financially and politically dominate the world without opposition, and feel their supremacy increasingly threatened by rising powers such as China, India and Russia.

However, the election of Donald Trump as US President may mean they are forced to accept a changing world order — for as long as he is in office, at least.

Furthermore, Sir Fallon may be forced to take a milder tone on Russia for the same reason — after all the UK government is rushing to bring its foreign policy more in line with that of President Trump, someone who makes no secret of his desire for improved US/Russia relations.

As Mr. Fallon delivered his speech, in which he praised US and European sanctions on Russia, the US Treasury announced it was adjusting its sanctions.

The Defense Secretary's intended depth charge may turn out to be a damp squib.