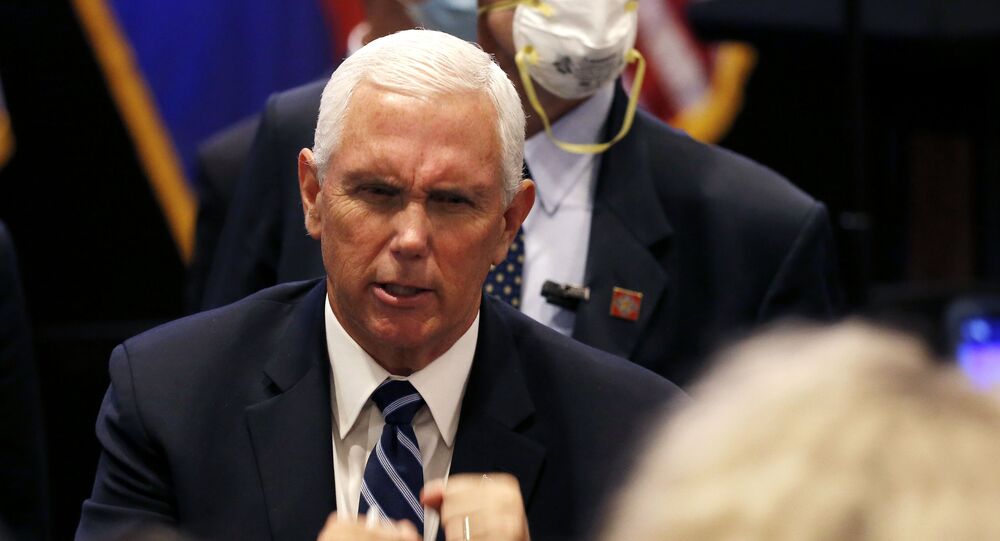 On Tuesday, the former US vice president and presumptive Democratic nominee, Joe Biden, announced that he had chosen California Senator Kamala Harris as his presidential running mate on the Democratic ticket in the November 2020 election against Republican President Donald Trump and his VP, Mike Pence.

US President Donald Trump on Tuesday during a press conference praised US Vice President Mike Pence, saying that he is “solid as a rock” and has the ability to stand against Joe Biden’s vice presidential running mate, Senator Kamala Harris.

“Well I like Vice President Mike Pence much better [than Sen. Kamala Harris],” Trump told reporters when asked if Harris would help or hurt Biden’s presidential bid. “He is solid as a rock. He’s been a fantastic vice president. He’s done everything you can do. He’s respected by every religious group, whether it’s evangelical, whether it’s any other group, they respect Mike Pence. He’s been a great vice president and I will take him over Kamala”.

Asked if having Sen. Kamala Harris on the Democratic ticket will help Joe Biden, President Trump praises Vice President Mike Pence: “He is solid as a rock. He’s been a fantastic vice president.” https://t.co/Zh3v7wi2vN pic.twitter.com/kzd0RlgIxR

During the press conference, Trump said that he was “a little surprised” by Biden’s selection of Harris and slammed the former 2020 presidential hopeful as being “nasty” and “disrespectful” to the former vice president during primary debates and being “a big tax raiser” who wants to cut “funds for our military”.

Netizens reacted on social media, mocking the president’s comparison of Pence to Harris, insisting that the Senator “will chew up Pence and spit out the bones” in the VP debates which are scheduled to take place on 7 October.

He's scared! Kamala will chew up Pence and spit out the bones!

At least one Twitterian questioned whether Pence would make it to the election date as VP without being fired in a Trump tweet.

“Does this mean Pence is getting fired by tweet Friday evening?” the user wondered.

Does this mean Pence is getting fired by tweet Friday evening?

Heaps of praise onto Pence because Trump will need his pardon when he finally accepts he can’t win and resigns.

@Mike_Pence “Solid as a Rock!”@KamalaHarris @SenKamalaHarris is as fugazi as a cubic zirconia for Los Angele’s 6th street and Hill street jewelry district. pic.twitter.com/ISDSfrZlVP

Hahahahaha hahaha what a joke. Give me some @KamalaHarris @vp debate. She will destroy @Mike_Pence

Joe Biden picked the running mate who challenged him the most aggressively in the primary debates.

Trump picked the weakest sycophant he could find.

Pence is going to be in a critical burn unit after Harris sets him afire.

Users also cited the Trump administration's poor handling of the coronavirus (COVID-19) outbreak in the country, as an example of Vice President Pence's "failure", as he is leading the White House's pandemic response task team.

Leading the COVID team VP pence failed just as he failed Indiana during the HIV ravaging that state when he was the governer.

but he has a little trouble with science! pic.twitter.com/nMgQrxjJaz

Pence was in charge of the COVID19 response. How did that work out for you, Donnie Boy?

Early in the day, presumptive Democratic presidential nominee Joe Biden announced Senator Kamala Harris as his VP running mate in the November 2020 vote, because, as he put it, she is a “fearless fighter” and “one of the country's finest public servants”.

“I need someone working alongside me who is smart, tough, and ready to lead. Kamala is that person. I need someone who understands the pain that so many people in our nation are suffering. Whether they've lost their job, their business, a loved one to this virus,” Biden said about Harris, cited by Axios.