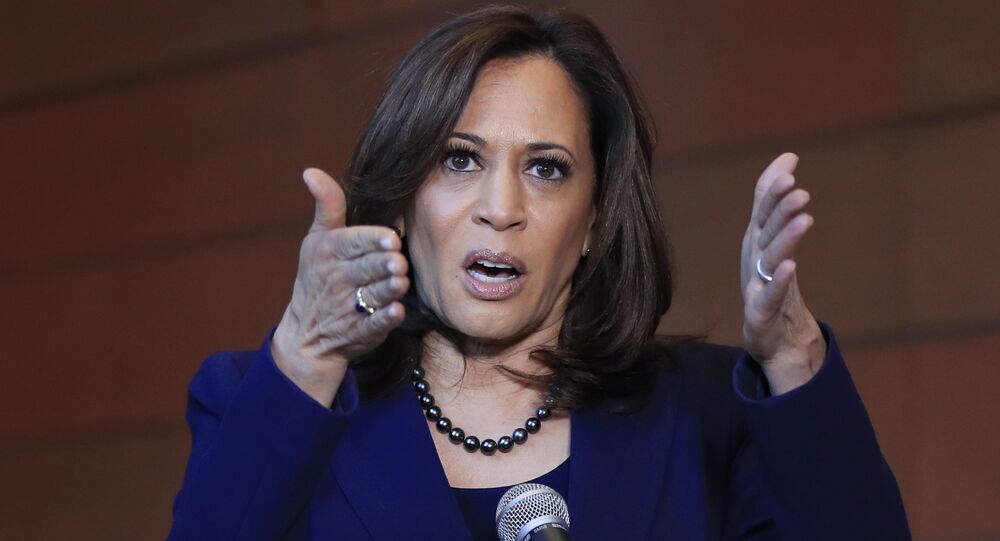 US Senator Kamala Harris (D-CA) was tapped on Tuesday to be Joe Biden’s vice presidential running mate on the Democratic ticket in the November 2020 election. Harris’ political history extends back to 2003.

Born in Oakland, California, in 1964 to an Indian doctor mother and Jamaican economist father, Harris entered school during the lengthy process of racial desegregation, a process she told Biden last year had greatly affected her political perspective.

Harris studied political science and economics at Howard University in Washington, DC, during which time she participated in political demonstrations against the apartheid regime in South Africa and interned as a mailroom clerk for California’s then-senior senator, Alan Cranston, who was in the midst of his own failed bid for the presidency in 1984. She then returned to California to study law at the University of California, San Francisco, passing the bar in 1990 and going to work as a deputy district attorney.

In 2003, Harris was elected district attorney of San Francisco, where she served until 2011, when she was elected on a “tough-on-crime” platform to become attorney general of California - the state’s “top cop,” as she once quipped.

As a district attorney and attorney general, Harris pushed for higher bail for criminal defendants accused of violent crimes and backed the “three strikes” rule mandating life sentences for third-time criminal offenders, but also firmly opposed the death penalty and never sought it in a case, even when public outcry favored it. However, she also backed initiatives aiming to ease the reintegration of former convicts into society after leaving prison.

Her record on LGBTQ right is mixed: although as district attorney she backed LGBTQ hate crime investigation units and has become known for the transgender-inclusive practice of stating her pronouns on the presidential campaign trail, she also supported policies that put trans women in men’s prisons and fought against a trans woman prisoner who sued for her right to receive gender-affirming surgery.

During the controversial era of Proposition 8, which re-illegalized same-gender marriage in California, Harris notably refused to recognize the amendment, which was soon struck down by state courts. She also co-sponsored the Equality Act, a bill that seeks to ban anti-LGBTQ discrimination nationwide.

Harris has a 100% approval rating by the abortion rights advocacy group Planned Parenthood Action Fund and an “F” rating from the National Rifle Association (NRA), indicating her strong support for the right to an abortion as well as restrictions on gun ownership.

While she has defended her record as California attorney general in prosecuting the Latino gangs often invoked by Trump as justification for his anti-immigration policies, Harris has also supported the DREAM Act and condemned the Trump administration’s policies of family separation and deployment of US troops to the Mexican border.

Harris is also a strong supporter of net neutrality, consumer protections and the continued nationalization of the US Postal Service, as well as the Medicare-for-All universal health care policy popularized by Sen. Bernie Sanders (I-VT). She also voted against the US-Mexico-Canada Agreement (USMCA) trade deal and for the 2021 National Defense Authorization Act (NDAA).

Harris is also a strong proponent of “Russiagate,” especially the notion that Russian hackers are stirring up dissent in the US via viral social media campaigns, such as the outrage over professional football player Colin Kaepernick taking a knee in protest during the US national anthem before games.

US Senator and Presidential Hopeful

In 2016, Harris defeated Republican incumbent Senator Loretta Sanchez to become California’s junior representative in the US Senate. As such, Harris was only the second Black woman and the first South Asian-American woman to serve in the upper chamber of the US Congress.

As a US senator, Harris sits on the Senate’s Judiciary, Intelligence, Homeland Security and Budget committees. In 2017, she traveled to Iraq to visit US troops there and also visited the Syrian Zaatari refugee camp in Jordan, and in 2018, she traveled to Afghanistan as part of a congressional delegation and received briefings and “met American service members, diplomats and national security professionals,” according to her office.

As senator, Harris has strongly opposed US President Donald Trump’s appointments to various political offices, including department heads and US Supreme Court justice nominees. However she has, generally speaking, supported the foreign policy of the Trump administration, especially in its more aggressive tendencies against Venezuela, North Korea, Russia, Syria and China, though she criticized Trump’s departure from the 2015 Iran nuclear deal.

She has spoken at the American Israel Public Affairs Committee (AIPAC) lobbying group’s annual convention every year of her senatorship. Harris has been described as “a lifelong supporter of Israel,” has celebrated the Israeli annexation of East Jerusalem and opposes the Boycott, Divestment and Sanctions (BDS) movement, though she also supports a two-state solution.

Harris was also one of Biden’s competitors for the Democrats’ 2020 presidential nomination. Though she posted an early lead in the huge field of potential candidates, by December of 2019 her campaign had petered out, and she withdrew from the running, citing a lack of funds.