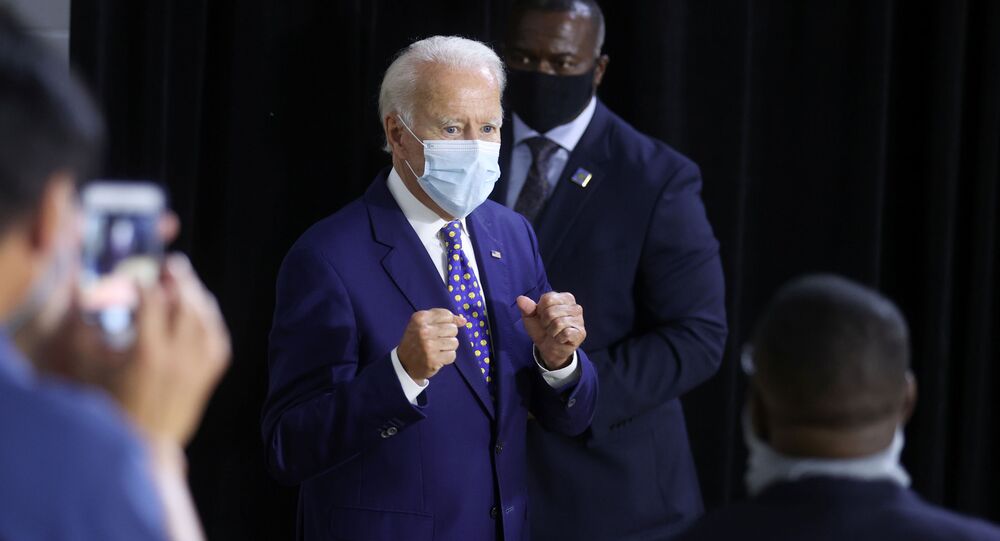 Presumptive Democratic candidate Joe Biden is soon expected to announce his running mate, and Fox News correspondent Peter Doocy was really hoping that he would be the first one to report on the news after catching the ex-Vice president during his daily bike ride.

It looks like Fox News reporter Peter Doocy did not really get Joe Biden’s trolling, as a short clip of him approaching the presumptive Democratic candidate during a bike ride on Saturday went viral on social media.

Doocy asked a fast-approaching mask-wearing Biden whether he has already picked up a running mate for his presidential ticket and after getting a confident “yes” rushed to ask the politician “who is it?”.

“You!” Biden jokingly replied and rode forward while surrounded by his cycling buddies.

But for Doocy this was enough and he reported on Biden’s first reply as if it were a real scoop:

“So yeah, he did not know the follow-up was coming but he did answer with direct ‘yes, he has picked a running mate’”, the correspondent said.

​With the clip getting viral on social media, many found the seriousness behind Doocy’s report quite hilarious, even if Biden indeed has already picked up his VP.

It’s kind of hilarious a network whose prime time hosts and contributors are continuously pushing that Biden is demented and unwell now have to show him riding a bike on a loop while answering questions.

So, Biden says he's picked Steve Doucy to be his running mate. If that's not news I don't know what is. 😎

Joe Biden and Peter Doocy obviously have a little bit of a history...

Biden campaign's national press secretary TJ Ducklo soon rushed to assure everybody on Twitter that the politician’s reply was “clearly a joke”.

“When Vice President Biden has made a decision on who his running mate will be, he will let the American people know. And I can confirm, it's not @pdoocy of @FoxNews”, the press secretary sarcastically explained.

Folks, this is clearly a joke. When Vice President Biden has made a decision on who his running mate will be, he will let the American people know. And can confirm, it's not @pdoocy of @FoxNews. https://t.co/iMfqMGepTE

Congrats on getting Fox News to beclown itself while running a clip of Biden vigorously exercising for its viewers. A+ work.

Of course it is !! @foxnews doesn't have a sense of humor. So transparent. They are fools

Many, however, seemed more surprised by the fact that 77-year-old Biden was actually riding a bike – more so without a helmet – despite recent speculation about possible mental health issues and even reports he could be experiencing dementia. Some social media users joked about a possible bike ride challenge between Joe Biden and President Donald Trump as a part of the upcoming November battle.

Thanks for clearing this up. Based on Joe's cogitative lapses lately, people were getting worried he may not be able to remember who his VP pick is.

He has a lot of people with him to make sure he doesn't get lost. Anyone can ride a bike. Having dementia doesn't effect riding a bike. But making sure someone else is in front so all he has to do is follow. Just like he would be doing if he was president. Following someone

Joe Biden can ride a bike, answer questions and wear a mask....at the same time. Compared to Trump...he’s an American Ninja Warrior.

Joe should challenge trump to a bike ride.

I’m not sure trump would be able to ride one without training wheels.

I want to see Trump ride a bike

Joe Biden is expected to confirm his Democratic Party nomination during the party’s national convention on 20 August. Many now expect that the presumptive candidate will announce his running mate prior to that, with possible candidates for the position including California Senator Kamala Harris and Obama’s former national security advisor Susan Rice.