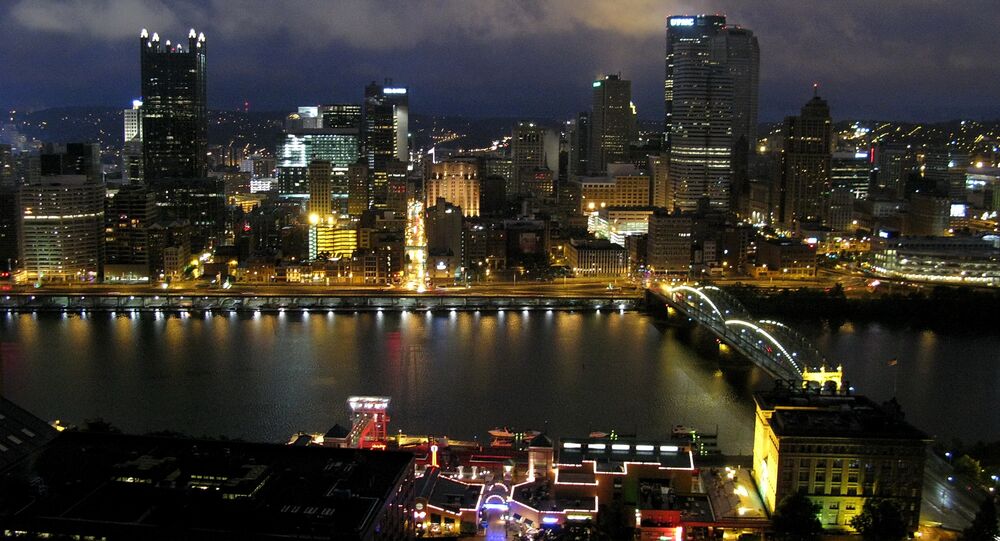 At least four people have been killed in a shooting at the Tree of Life Synagogue on Wilkins Avenue in Pittsburgh, Pennsylvania. The suspect, who has already been detained, reportedly shouted "all these Jews need to die" during the attack.

While emergency services take care of those who were injured in the attack and police investigate the scene, people have taken to Twitter to share their thoughts on the deadly shooting in the Pittsburgh synagogue.

My heart breaks over the news out of #Pittsburgh. The violence needs to stop. May God bless, guide & unite the United States of America.

The US president's daughter, Ivanka Trump, called for all Americans to unite against acts of terror and hatred, calling the synagogue shooter a "bigot and anti-Semite."

America is stronger than the acts of a depraved bigot and anti-semite.

All good Americans stand with the Jewish people to oppose acts of terror & share the horror, disgust & outrage over the massacre in Pittsburgh.
We must unite against hatred & evil.

Israeli Prime Minister, Benjamin Netanyahu extended Israel's condolences to the families affected by the tragedy. He added that Israel stands together with the American people "in the face of horrifying anti-Semitic brutality."

"I am heartbroken and shocked by the murderous attack today at a synagogue in Pittsburgh. The whole of Israel grieves with the families of the dead. We all pray for their rapid recovery," he wrote on his Twitter.

Pennsylvania Governor Tom Wolf called the attack an "absolute tragedy" and urged for better gun control in the US.

"We must all pray and hope for no more loss of life. But we have been saying "this one is too many" for far too long. Dangerous weapons are putting our citizens in harm's way," he said.

It’s a synagogue, prayers to all

Our Prayers are with you #Pittsburgh pic.twitter.com/YxKho17JMt

…or expressed condolences to relatives of the victims.

Such a shame that civilians are targeted by coward terrorists. Regardless of attacker’s motive, his identity and regardless of victims religion, nationality, I strongly condemn the attack. Condolences to the victims beloved ones. #Pittsburgh

Condolences to everyone affected. Be safe.
.
.
.
Let's just hope this isn't about what it very well could be about.#Pittsburgh

Twitter users were shocked by the brutal assault that took place in the synagogue.

This is a nightmare

@GovernorTomWolf this is so sad and insane

I am shocked, I am saddened, and I am angry. How many more people have to die until we do something about it? #Pittsburgh #TreeOfLife

Many twitterians were infuriated as they learned that the assailant had shouted "all Jews need to die." They pointed out that anti-Semitism doesn't seem to have been wiped out in society.

"All these Jews need to die," gunman shouts at police on scene at #Pittsburgh synagogue shooting. Anti-Semitism alive and kicking, the epitome of evil.

Really really praying for the #TreeofLife community in #Pittsburgh. Squirrel Hill is my old hood and the Jewish community has always been welcoming to me from Brooklyn to Miami to Pittsburgh. Jesus Christ, help us all. America is sick.

A lot of Twitterians instantly called for government action to tackle both mass shootings and anti-Semitism.

It’s absolutely heartbreaking to wake up & see another shooting. My condolences to the people in the synagogue & the friends/family of those victims. When will this country take some action?? #Pittsburgh https://t.co/FPlDKpU3i5

I am OUTRAGED. This is my hometown synagogue. Too many guns! Too much racism! Too much hate speech! It’s time for our country’s leaders to take responsibility for their rhetoric & take action. NOW. @USJewishDems @ChrisMurphyCT @MomsDemand #Pittsburghshooting #pittsburgh https://t.co/MwKgJDFTQc

Anti-Semitism has no place here in #Pittsburgh

Drive the Nazis out with their tails between their legs

An attacker, reportedly carrying an AR-15 rifle and a Glock handgun, entered the Tree of Life Congregation Synagogue in Pittsburgh, Pennsylvania and opened fire on those praying there. According to reports, at least 4 people have been confirmed dead, while estimates as to the total number of casualties vary from 7 to 8.

Crimean College Hit by Shooting to Reopen on Tuesday, Or Later – Kerch Mayor