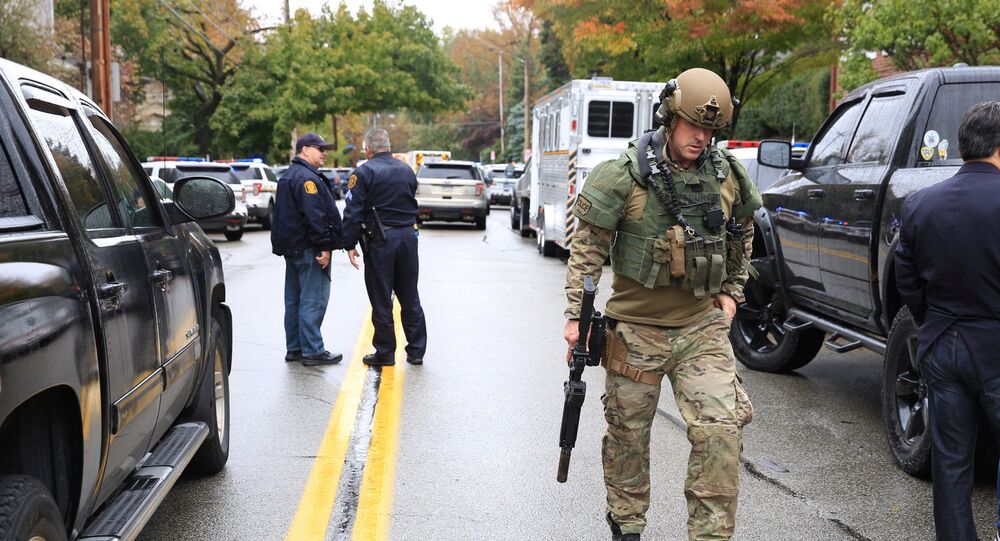 The shooter who attacked the Tree of Life Synagogue on Wilkins Avenue in Pittsburgh, Pennsylvania, has been detained. Reporters at the scene say that the attacker was shouting "all Jews need to die."

"At this time the suspect in the shooting is in custody. We have multiple casualties inside the synagogue. We have three officers who have been shot," a police spokesman told reporters.

A reporter at the scene said that the assailant was allegedly shouting "all Jews need to die" before being detained. The correspondent identified the suspected attacker, citing "reliable" sources, as Robert Bowers, 48 years old. The police have not yet confirmed this information.

According to BNL News, the person's social network accounts indicate that he is a supporter of Nazis and Adolf Hitler. In addition, according to the news outlet, the suspect hates US President Donald Trump, because, he believes, the US president is under the control of Jews.

Today is going to be a very very bad day. My heart breaks for all involved in this heinous act. This is frightening. https://t.co/0E1SbLaFFg

An active shooter walked into the Tree of Life Congregation Synagogue in Pittsburgh, Pennsylvania and opened fire, police services reported. The attacker was reportedly carrying an AR-15 and a Glock handgun, as well as a "military-style package," which was being checked inside the synagogue following reports of an explosive device.

According to KDKA, 11 people have been killed as a result of the attack. As NBC reported, at least 12 others have been injured.

Earlier, KDKA reporter Andy Sheehan said that at least four people had been confirmed dead, adding that the exact number of casualties was unknown. According to local media reports, two police officers were shot as a result of the assault.

#BREAKING: 7 dead (4 on the main floor, 3 in the basement), others injured after #activeshooter opens fire in a #Pittsburgh synagogue during bris ceremony https://t.co/dWbTpO3Jsx via @whnt pic.twitter.com/zjfmhgGtCS

Sources with knowledge of the investigation told the Associated Press previously that at least 10 people have been killed in the synagogue shooting. Sources spoke to AP anonymously as they are not authorized to speak publicly about the shooting.

Pittsburgh Public Safety Director Wendell Hissrich called the aftermath of the attack "one of the worst crime scenes he had ever seen," adding that the FBI will lead the investigation into the accident. He stated that the shooting was a hate crime.

The official noted that the shooter was taken to a hospital, refusing, however, to confirm his identity.

.@PghPublicSafety director Wendell Hissrich, on the identity of the shooter in Squirrel Hill: pic.twitter.com/IcXxsbHOFG

We are still learning details about the shooting at the Tree of Life Synagogue in Pittsburgh but it is a serious situation. @PAStatePolice are assisting local first responders. Please stay away from the area and keep the congregants and law enforcement in your prayers.

Later, Wolf stated: "The shooting in Pittsburgh this morning is an absolute tragedy. I have spoken with local leaders and my administration and the Pennsylvania State Police will provide any resources to assist local law enforcement and first responders."

Police and emergency services, as well as a SWAT team, were deployed to the area. They tried to evacuate those who were still inside the building after they had rescued several other people. When police arrived, the attacker reportedly shot at them, forcing officers to take cover behind their vehicles.

Local media outlet KDKA reported that the synagogue was full of people at the moment of the attack for a Saturday service.

ALERT: There is an active shooter in the area of WILKINS and Shady. Avoid the area. More info will be released when it is available.

According to police, they had received several calls from people barricaded inside the Synagogue.

outside of tree of life synagogue in pittsburgh. can hear multiple shots. police urging people to get away. pic.twitter.com/PAZlYKbywJ

Carnegie Mellon University, located nearby, was locked down, with students receiving texts telling them to stay inside.

President Donald Trump reacted to the situation on Twitter:

On Saturday Trump called the shooting at the synagogue a wicked act of mass murder and pure evil, saying that Americans must rise above hate and move past divisions.

Trump said at the start of another campaign really in Indianapolis that anti-Semitism "must be condemned and confronted everywhere and anywhere it appears." Meanwhile, the president also noted that he would not cancel a political rally in Illinois after the Pittsburgh shooting.

The first lady also took to Twitter to react to the attack:

My heart breaks over the news out of #Pittsburgh. The violence needs to stop. May God bless, guide & unite the United States of America.

Reacting to the shooting, the New York Police Department on Saturday intensified security around synagogues and Jewish communities, ABC reported.

We continue to closely monitor the active shooter incident in Pittsburgh. Currently, there is no nexus to New York City.

However, we have redeployed our Counterterrorism teams out of an abundance of caution. #NYPDProtecting pic.twitter.com/b9ofQnwtgz