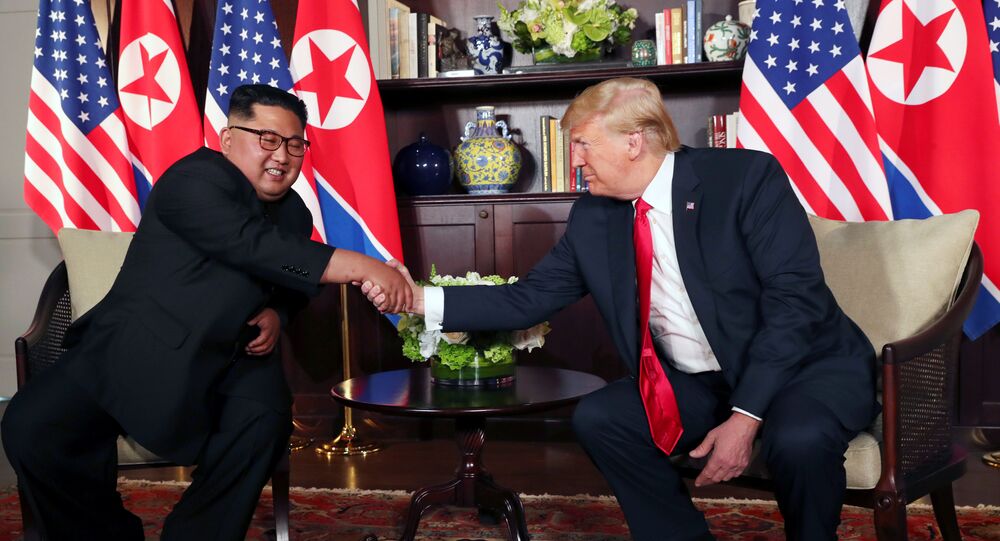 US President Donald Trump and his North Korean counterpart Kim Jong-un shook hands ahead of a landmark summit at the luxurious Capella Hotel on Sentosa Island, Singapore, which marked a stunning rapprochement between Washington and Pyongyang.

As the highly-anticipated talks were about to start, the two heads of states shared an historic handshake that has already been placed in the spotlight of the whole world, including body language experts, who started analyzing the first moments of the unprecedented meeting between a sitting US president and a North Korean leader.

“They both came out from each side of the stage at pretty much the same time and walked toward each other at the same speed, showing equality of power,” said Patti Wood, the author of Snap: Making the Most of First Impressions, Body Language & Charisma.

Trump – who has a history of awkward handshakes with some world leaders – and Kim stood face to face while shaking hands for about 13 seconds in front of the flags of the two countries, with the North Korean leader reportedly greeting his American counterpart in English, “Nice to meet you Mr. President.”

The photographs and videos of the moment immediately emerged on social media platforms, prompting users to suggest that the improbable step had opened a new chapter in the history of international relations.

A close up of the handshake… definitely historic. #TrumpKim #TrumpKimSummit
Foto by REUTERS/Jonathan Ernst pic.twitter.com/WOxg9iAte4

First @AP photo of The Handshake between Trump and Kim #SingaporeSummit pic.twitter.com/TFEoNbQjKW

This is it! The #TrumpKim handshake we've all been waiting for. pic.twitter.com/eIP1X9xTLj

President Donald Trump and North Korean leader Kim Jong signed an unspecified agreement at a summit in Singapore's Capella resort. The power of the #Handshake.

​Many praised the efforts the two leaders made to overcome difficulties and make the summit happen:

An extraorinary achievement. #Trump is right: if this had been Obama's doing, he would be treated like a Messiah. Trump deserves the accolades. Who the hell would have imagined that?! #Summit#NorthKoreanSummithttps://t.co/giBQCu0ncb

My parents were just about 20 when they saw Reagan and Gorbachev shake hands. Today, I’m 23 and just witnessed the Trump Kim handshake. #trumpkimsummit #surreal pic.twitter.com/Lo27irq7tH

I mean, this is just incredible! This is history.

Donald Trump and Kim Jong-un are holding talks in Singapore to put an end to a nuclear standoff on the Korean Peninsula and completely denuclearize it. The two have already reached an agreement, with the US president saying that they had signed a “pretty comprehensive document,” while Kim stated that the world was about to see “a major change,” and expressed gratitude to Trump for the summit.