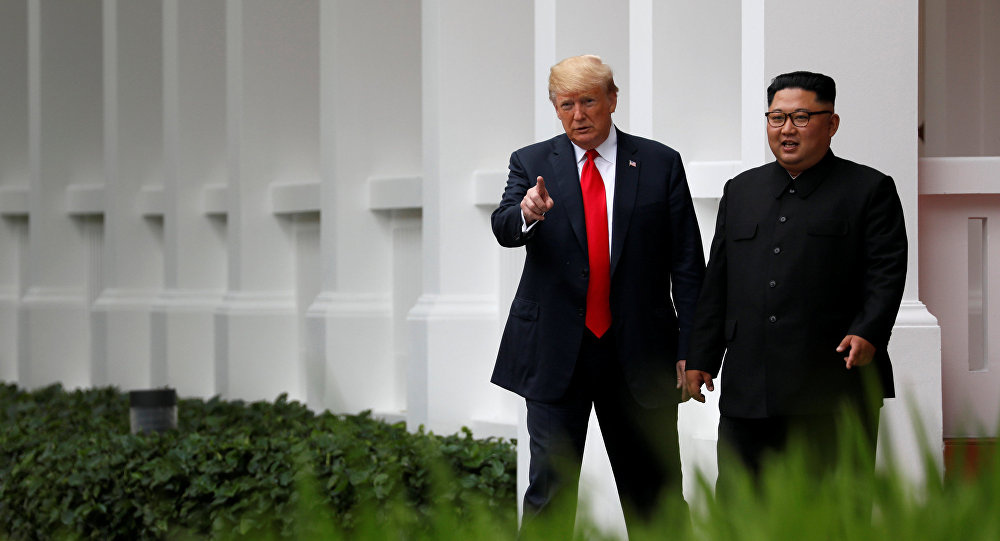 US President Donald Trump and North Korean leader Kim Jong-un are holding their first ever meeting on Tuesday in the hope of finding a peaceful solution to the nuclear crisis on the Korean Peninsula.

US President Donald Trump and North Korean leader Kim Jong-un shook hands with each other for the first time, before kicking off negotiations aiming to bring complete denuclearization to the Korean Peninsula.

© REUTERS / Kevin Lamarque
Trump, Abe Agree to 'Consult Closely' After Singapore Summit
Trump and Kim are expected to first engage in a one-on-one meeting, with translators only, before expanding to a bilateral meeting and a working lunch. US officials expected to take part in the expanded bilateral meeting will include Secretary of State Mike Pompeo, Chief of Staff John Kelly, and National Security Advisor John Bolton. Press Secretary Sarah Sanders, Ambassador Sung Kim, and National Security Council Senior Director for Asia Matt Pottinger will join for the working lunch.

In in his first comments alongside North Korean leader Kim Jong-un US President Donald Trump said that their summit will bring a "tremendous success."

"We are going to have a great discussion. It's gonna be a tremendous success. We will have a terrific relation," Trump told reporters after greeting Kim at the Capella Hotel on Sentosa Island.

The North Korean leader said that the meeting became possible as parties overcame obstacles on the way forward.

"The way to come here was not easy. The past falters in our names and the old prejudices and practices work as obstacles on our way forward. But we overcame all of them," Kim stated. 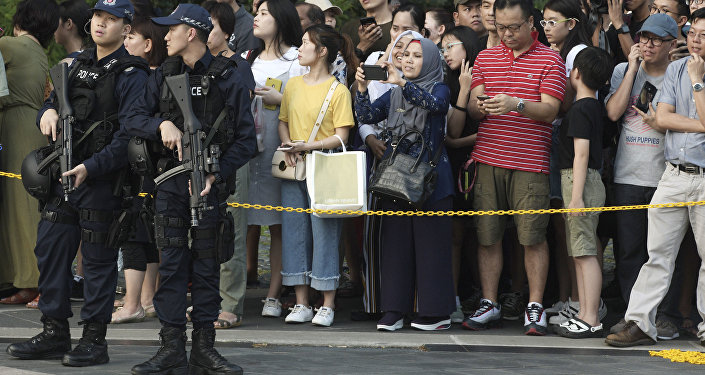 "We will solve a big problem, a big dilemma," Trump said after the meeting with Kim adding that the meeting was "very, very good."

The meeting between Donald Trump and Kim Jong-un lasted for about 45 minutes as it was initially planned. After the one-on-one meeting concluded the parties moved on to the summit in an expanded format.

After a working lunch, the two leaders walked around Singapore's Capella hotel and went back to the hotel. Moments before, Trump told journalists that the meeting was "better than anybody could have expected," and said that the leaders were going to "a signing".

"A lot of progress — really very positive. I think better than anybody could have expected. Top of the line, very good. We're going now for a signing," Trump said.

CNN reported later, quoting an unnamed Washington official, that the two leaders are going to sign an agreement to acknowledge the progress of the talks and pledge to keep momentum going.

Meanwhile, local media reported that North Korea's leader Kim Jong-un said following one-on-one meeting with US President Donald Trump in Singapore that he was interested in developing close cooperation with the US president.

According to The Straits Times newspaper, Kim is willing to work closely together with Trump even despite the possible difficulties and obstacles.

Also, journalists, present at the meeting, reported Trump Saying that he has "great relationship" with Kim Jong-un.

After the meeting Trump addressed the outcome document.

"So we're signing a very important document, a pretty comprehensive document… We're both very honored to sign the document," he said.

"We're very proud of what took place today. I think our whole relationship with North Korea and the Korean peninsula is going to be in a very much different situation than it has in the past… We have developed a very special bond… We're going to take care of a very big and a very dangerous problem for the world," Trump said.

In his turn, North Korean leader stated, that the world was about to see "a major change" and expressed his gratitude to Trump for making this meeting possible

The US President called Kim Jong-un a "very talented man," who "loves his country very much", adding he would "absolutely" invite Kim to the White House. Trump stated that he would hold a press conference later in the day, also pledging to continue to conduct negotiations with Kim in the future.

After a long handshake, Kim and Trump left the sight of the meeting.

Earlier, after both leaders arrived in Singapore on Sunday, diplomats from the two nations held a "substantive and detailed" meeting on Monday led by US Ambassador to the Philippines Sung Kim and North Korean vice foreign minister Choi Sun Hee, US Secretary of State Mike Pompeo said.

© AP Photo / Joseph Nair
Singapore's PM Meets Trump Ahead of North Korea Summit
For a flight to Singapore, Kim chose a Boeing 747 aircraft provided by the Chinese flagship carrier Air China, instead of the national Air Koryo. The North Korean leader moved through the streets of Singapore in the black Mercedes Benz, swarmed by bodyguards.

READ MORE: Some Facts About the Upcoming Kim-Trump Summit

The key objective for the US will be to successfully negotiate the denuclearization of the Korean Peninsula. Washington has already laid out the key principles it considers important: a complete, verifiable and irreversible termination of the DPRK's nuclear program.