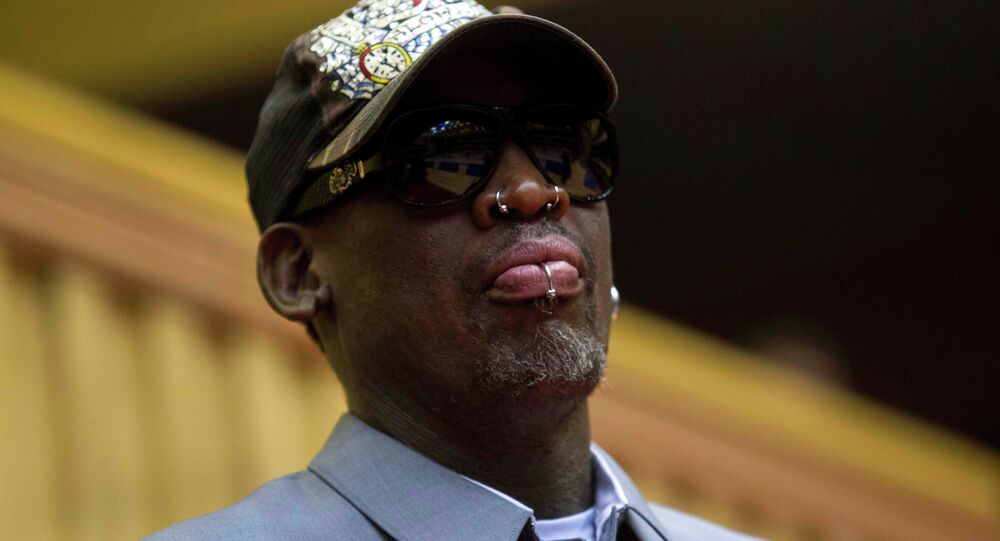 Rodman has reportedly traveled to North Korea five times so far. During his last visit in 2017, the Ex-NBA star said he was trying to reach something important for both countries.

On Tuesday, famous "North Korean envoy" Dennis Rodman broke down in tears live on CNN, saying that the controversial talks between him and Kim Jong-un and between Donald Trump and Kim Jong-un were the right thing to do. "We need the doors to be open and start fresh and make this world a better place," Rodman stressed.

"Today is a great day," former NBA star Dennis Rodman says in an emotional interview in which he describes his relationship with North Korean leader Kim Jong Un https://t.co/atvQwe7jo0 pic.twitter.com/dEgQf3kBtE

© AFP 2021 / Saul Loeb
World Follows Every Step of Historic Trump-Kim Summit
Dennis Rodman, who has formed a close relationship with Kim since his visit to North Korea in 2013, said Friday in a Twitter post that he would give whatever support is needed to his friends, Trump and Kim. The former NBA defensive star expressed hope that the summit would have historic success.

Rodman appeard on CNN wearing a Trump supporter "Make America Great Again" hat and a t-shirt from his cryptocurrency sponsor.

In addition, Dennis Rodman recalled the sentiment and hostility he faced for meeting Kim Jong-un, saying that he even "got death threats."

1 year ago June 15 I gave this book "Art of the Deal" to Minister Kim Il Guk in Pyongyang, NK. Hoping everyone reads it before the historic Singapore Summit on June 12. We've got the greatest negotiator of all time @realDonaldTrump to show the world how it's done#Peace #Love pic.twitter.com/ERxXNnR20k

Rodman, however, said that the White House had eventually praised his efforts.