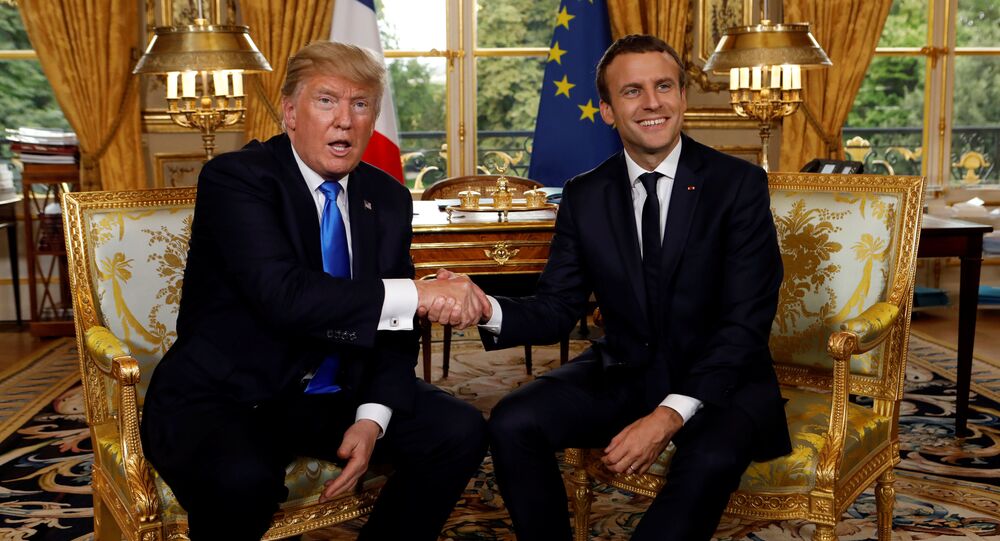 The marks the French President left on the US President after gripping his hand, went viral. The gripping presidential rivalry between Trump and Macron started last year in July during Donald Trump’s visit to Paris, which gave the social media users something to bite into with an unusual 29 second-long handshake.

La Malbaie, Canada, where the G7 Summit took place on June 8-9, has become the site for not only heated political debates and a showdown over the trade war and the Iran deal, but for a rivalry between two of the world's readers. Posing for photos in front of numerous cameras, French President Emmanuel Macron, 40, and US leader Donald Trump, 71, has generated a proper Twitter storm with their handshake, which went slightly beyond the usual diplomatic courtesy. Macron grabbed Trump’s hand so hard, it left pale marks of his finger on Trump’s hand.

​The photos of the US President’s spotted hand as well as images of Macron, winking and shaking Trump’s hand, outshined any other agenda for many Twitter users. This squeeze incident reminded the commentators of another handshake between Trump and Macron, which occurred last year in Paris and lasted for unusually long time of 29 seconds. Some even implied that was Macron’s revenge.

Macron gets the upper hand! French president grips Trump's digits so hard they turn PALE and are left with a thumb print — before giving a cheeky wink after waiting 11 months to exact revenge for that VERY cringeworthy shake in Paris pic.twitter.com/0b1oqB30Y2

​The winner of the handshake battle was chosen almost unanimously.

Trump gets totally OWNED by Macron.

Look at the imprint Macron’s grip left in Trumps hand.

Macron was an Olympic boxer, he wasn't going to put up with that 80s power handshake bullshit from Trump.

​Others suggested a Rocky-style plot for Macron.

I bet you cash money that Macron has been working one of those hand grippey exercise things like a champ.

​Others just have their best time joking about another special moment between two leaders.

I think Macron thought that Trump's hand was one of those stress balls.

Merkel: “If you don’t apologize to Emmanuel, you will not get ice cream later today. These are not decisions nice boys make.”

Trump: “I don’t care! He started it! He squeezed my hand so hard!!”

Uhh oh. That means no more hugging and honeymoon handshakes. Trumps done messed that up.

​However, many were disappointed with how much attention the photos got.

This is ridiculous. The left is losing it.

​The personal relationship between the two political leaders has been in the spotlight since that meeting in France, having ups and downs. They swayed from rivalry during Paris’s handshake incident to what many described as “bromance” when the French President stayed in the White House for two days this April during the first state visit of Trump’s administration. That was marked with Trump’s  “dandruff” move, as he brushed flecks from Macron’s jacket, puzzling social media and journalists.

However, since that presidential sleepover a lot has occurred between this two leaders due to Trump’s decision to pull out of the Iran deal and impose higher metal import tariffs, which impacted France among others. They took their mutual discontent to the media and exchanged several pointy remarks on Twitter and in the media. The French President even hinted that the US can be excluded from the G7 Group of the world’s largest economies due to its hostile actions.

However, Trump concluded the powerful handshake with claims, the special vibe between these two are still on.

'We have a very really good relationship, very special,' Trump said, according to Yahoo.

Twitter found a photo proof of his words, either.

Find somebody who looks at you like the way President Macron looks at President Trump. pic.twitter.com/hcNP4PrCJb

'Not Forever': How Macron's Bromance With Trump Turned Into Offense