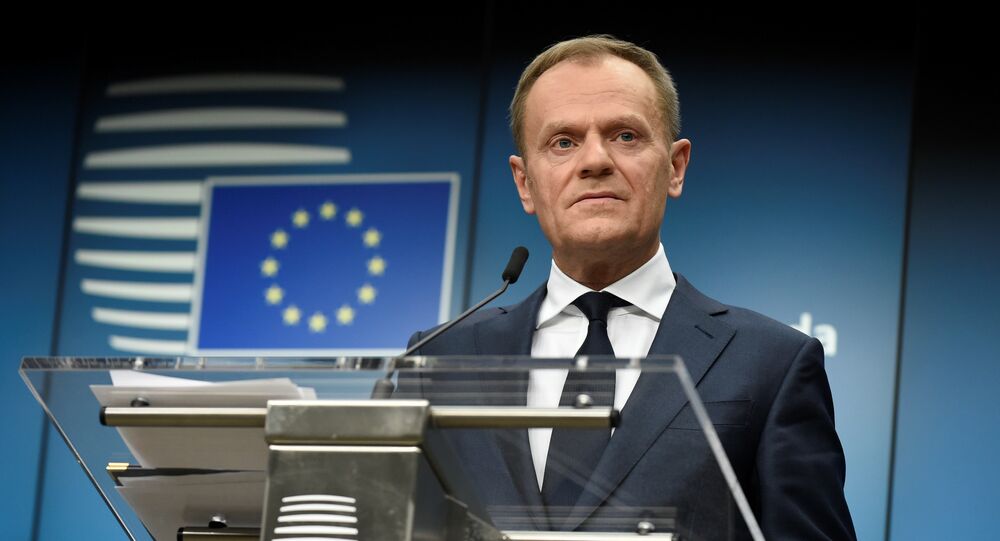 With UK Prime Minister Theresa May due to deliver a key speech on Brexit next Friday, European Council President Donald Tusk has warned London against "cherry picking" its future ties with the EU.

Speaking at a news conference in Brussels, European Council President Donald Tusk specifically touched upon the UK government's approach to the second stage of Brexit talks, which was discussed at Prime Minister Theresa May's country retreat Chequers on Thursday.

Tusk said that he could only keep an eye on media reports about the discussion, which saw the 11 senior ministers agreeing on so-called "managed divergence," stipulating that Britain could select EU rules to adhere to post-Brexit.

"If the media reports are correct, I am afraid that the UK position today is based on pure illusion," Tusked pointed out, rejecting any notion of London "cherry picking" the details of its future relations with the EU.

According to him, media reports indicated that "cake philosophy is still alive" in Britain, referring to prior comments made by UK officials that they wanted to "have their cake and eat it" by leaving the EU's single market and continuing to enjoy its benefits.

Tusk's arrogance today claiming we are living in 'pure illusion' is insulting and patronising. British voters rejected the EU, get over it!

Twitter users immediately reacted to Tusk's remarks, with many mincing no words when slamming the European Council President's Brexit stance.

May. Stop sucking up to these dictators. You are better than them.

Well Tusk is well equipped to spot illusion, he's been living it for years with dreams of total domination of all Europeans!

Theresa May hasn't made a decision yet. It's not Donald Tusk's job to ensure she never has to. Make a decision Theresa.

It has taken almost 24 months for PM May & UKGov to agree what they want from the Brexit negotiations. It took EU president Tusk less than 24 hours to describe their plans as "pure illusion".#BrexitShambles #ToryFail #ScotRef 🏴󠁧󠁢󠁳󠁣󠁴󠁿

Donald Tusk: UK Brexit plans 'pure illusion';
Time for the EU to change their president — Tusk is helping neither the EU or the UK.

Brexit negotiations between the United Kingdom and the European Union kicked off in June 2017 and are due to wrap up by the end of March 2019.

The first phase of the talks focused on the protection of the rights of EU citizens in Britain and UK citizens in the bloc, as well as the UK-Irish border and London's financial obligations to Brussels after Brexit.

The second phase pertains to the transition period in EU-UK relations after Brexit, and their future trade and security cooperation.

To Cut Anti-Terrorism Funds or Not: EU States Divided Over Post-Brexit Finances

Conservative Backbenchers Remind Theresa May of Vulnerability on Brexit