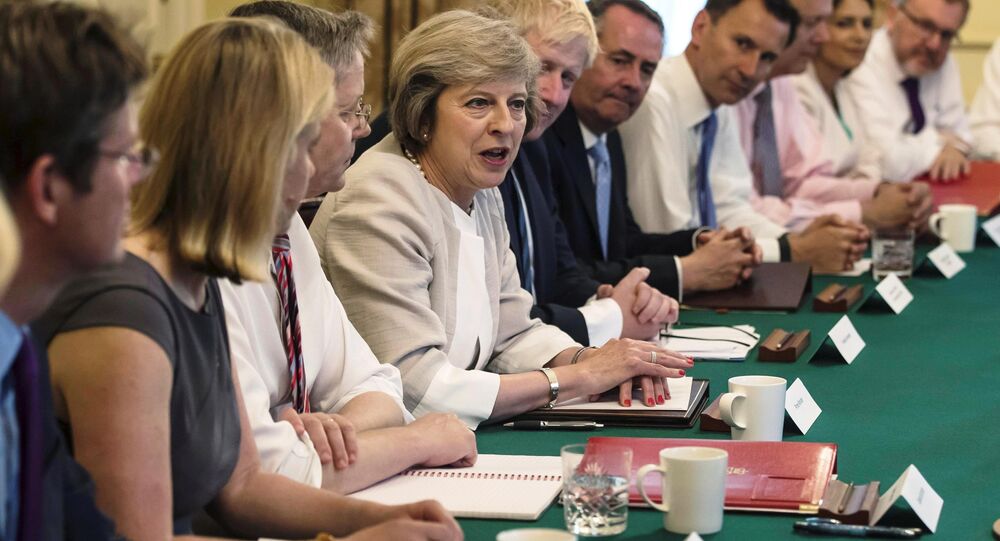 The British Prime Minister has found herself increasingly under pressure from opposing wings of her cabinet who want the UK to maintain close relations with the European Union and those who want a sharp break from the Continent's economic institutions.

UK Prime Minister Theresa May has convened a so-called "war cabinet" meeting of her ministers to attempt a resolution to months of increasingly bitter and open feuding between members of her government on exactly what kind of relationship Britain should have with Europe after it has left the European Union.

On February 5, prominent former Conservative Minister for Small Business Anna Soubry publiclly called on the Prime Minister to expel the Hard Brexiteers such as Foreign Secretary Boris Johnson, Environment Secretary Michael Gove and MP Jacob Rees-Mogg from the party, hinting that she herself and other pro-Remain Conservatives may leave if such action is not taken, leading some to question not just the survival of the Government, but the Conservative Party itself.

Literally the worst play on WWII imagery imaginable. The EU has brought over 50 years of peace to our continent. https://t.co/I60p2EAynD

I recall many of these meeting from decades in Corporations and Start-ups. Invariable these sorts of meeting prceeded either receivership or a takeover.#StopBrexit #Brexit

.@theresa_may will chair a meeting of her "War Cabinet" this afternoon in an attempt to iron out the government's differences over #Brexit — does this week's guarantee on "no customs union" mean that there will be a hard border? pic.twitter.com/s8D7gVdIhi

Tensions between the opposing wings of the government, which have periodically broken out since Mrs. May acceded to the Prime Ministership in June 2016 dramatically burst into the open last week while the PM was seeking out deeper trade links with China.

The main representatives of the side wanting to maintain the UK's membership of, or association with, the European Customs Union and the Single Market are the Treasury Secretary Phillip Hammond and the Home Secretary Amber Rudd, both of whom backed Remain in the 2016 Brexit referendum.

So-called "Hard Brexiteers" who fear the government's original platform of leaving the Single Market and the Customs Union once it is outside the EU may be diluted or abandoned. Chief among them inside the Cabinet are the Enivornment Secretary Michael Gove, International Trade Secretary Liam Fox and Foreign Secretary Boris Johnson.

© CC0 / PIxabay
Brexit, Beyond the Seas: Where the UK Will Forge Its Post-European Future

The key sticking point centers around the freedom, desired by the Hard Brexiteers, for Britain to be able to negotiate its own independent economic partnerships around the world outside the EU. At present Britain does not have such leeway by virtue of its membership in the Customs Union, through which Europe has collectively negotiated trade deals such as the Canada Europe Trade Area (CETA) and the Trans-Atlantic Trade and Investment Partnership (TTIP).

Foreign Secretary Boris Johnson spruiked such possibilities throughout his first year in the job on official visits to the Gulf Cooperation Council states, Australia, New Zealand, which have been touted as potential sources of increased trade after Brexit.

Following the Cabinet meetings, which are expected to carry on until the end of February 8, UK representatives are to resume talks in Brussels with four days of intensive negotiations. This comes after Brexit Secretary David Davis and the Chief EU negotiator Michel Barnier agreed February 5 to accelerate the pace of the talks.