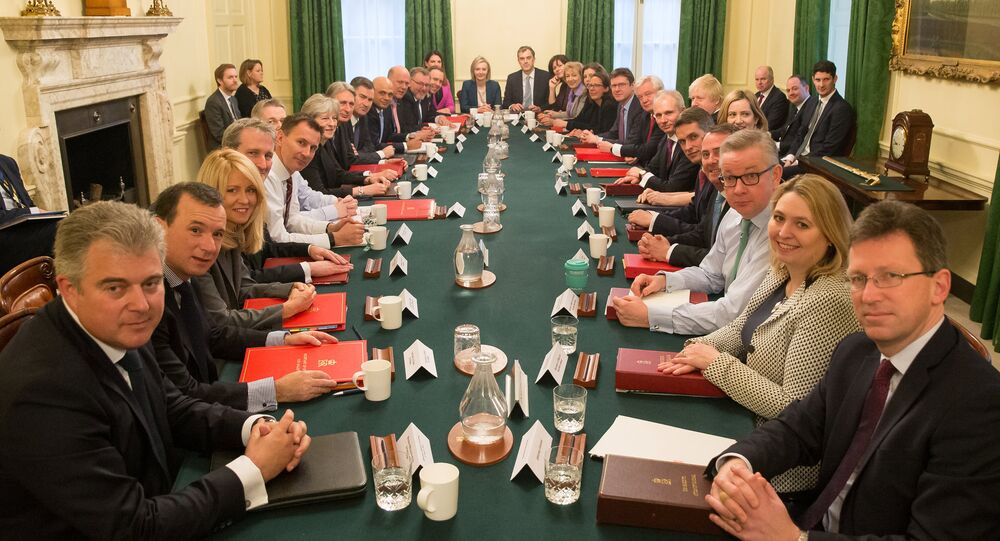 A leading UK academic has told Sputnik the renewed infighting within Conservative Party ranks comes amid fears the Prime Minister will make concessions to Brussels on trade.

UK Prime Minister Theresa May on February 5 flatly ruled out Britain remaining in any form of customs bloc with the European Union once it has officially left in March 2019.

An official statement from the Prime Minister's office claimed that the government's position was consistent with its pledge in August 2017, and originally outlined by Mrs. May at Lancaster House last January to pull the United Kingdom entirely out of the Single Market and the Customs Union.

Professor Iain Begg of the London School of Economics' Europe Institute and Senior Fellow at UK in a Changing EU told Sputnik that the Government's official positions on leaving EU bodies have indeed not changed, but that the increased belligerence of the "hard-Brexiteers" shows they are growing worried that their vision for Britain's exit from the EU is in danger of being diluted.

"The internal tensions are around the possibility that, although formally leaving the Customs Union, this notion of "regulatory alignment" is going to mean mimicking it to a far greater degree than the pro-Brexiteers want," Professor Begg said.

Customs Union — To Remain Or Not?

The government's renewed resolve to sharply break from the EU's economic structures has been furiously criticized by leading Remain-supporters including the Labour chairman of the cross-party Select Committee for Exiting the EU, Hilary Benn who has called it a "profound mistake."

Negotiations between the two sides on their future trading relationship began after a preliminary December agreement that principally sought to prevent a hard customs border appearing along the UK-Irish border. The agreement was nearly sunk by the Prime Minister's partners in power, the Democratic Unionist Party (DUP), who feared remaining in the Customs Union or Single Market would lead to Northern Ireland's economic separation from the rest of the United Kingdom. The agreement spelled out a commitment on both sides to "regulatory alignment," implying the UK would continue to adhere to EU product and customs standards without actually being a member of the bloc.

Foreign Secretary Boris Johnson, Environment Secretary Michael Gove and Conservative MP Jacob Rees-Mogg have been amongst the most vocal proponents of a so-called "Global Britain" striking independent free-trade deals across the world independently of the EU, something Professor Begg explained would be impossible if Britain maintained close links to the EU bodies.

"In the Customs Union it hinges on one thing, if you are part of a customs union, you negotiate as part of it when it comes to trade deals with other parts of the world. Being in the EU at present, Britain does not independently negotiate with Japan or with the United States or China. One of the promises of Brexit was that when we leave we will be free to negotiate such deals and that is a binary choice. If you are part of a customs union, you can't negotiate with others. If you want to negotiate with others, you can't be in the Customs Union. I think that is the nub of the challenge at the moment," Professor Begg said.

Since returning from trade talks in China last week, Theresa May has had to navigate increasingly open disagreements among her ministers, in particular Home Secretary Amber Rudd's rebuke to Rees-Mogg over his claims that the civil service has been attempting to exaggerate the economic damage of Britain's exit from Europe. The open tensions have further complicated her position as Conservative Party leader since the inconclusive 2017 general election result.

"She's been defying gravity since June when the election result became known. I think the reason she continues to defy gravity is based on what I describe as three negatives; they can't decide on who to replace her with, they don't want to have a leadership election that would interrupt the Brexit negotiations and if they do appoint a new leader, that leader is going to be under severe pressure to hold a general election which somebody called Corbyn might win. For all three reasons the Tory party is reluctant to jettison Theresa May. We've seen over the last few weeks, her repeated weakness in the face of opposition or the need to make hard choices."

READ MORE: Will Luck of the Irish Come Back to Haunt UK PM After Brexit Deal?

Professor Begg added that, based on comments by the EU's lead negotiator Michel Barnier in his meetings with David Davis, Brussels may be inclined to be more cooperative with London due to fears of what a collapse in Mrs. May's Premiership and potentially her government, may bring.

"The fear in Brussels is if she goes, it will create turmoil from which all are going to lose so there's a vested interest in Brussels in sticking with Theresa May and as we saw in December even helping her out of the rather difficult position she get herself into with the DUP, I suppose it's ‘the devil you know rather than the devil you don't,'" he said.

The views and opinions expressed by Iain Begg are those of the speaker and do not necessarily reflect those of Sputnik.