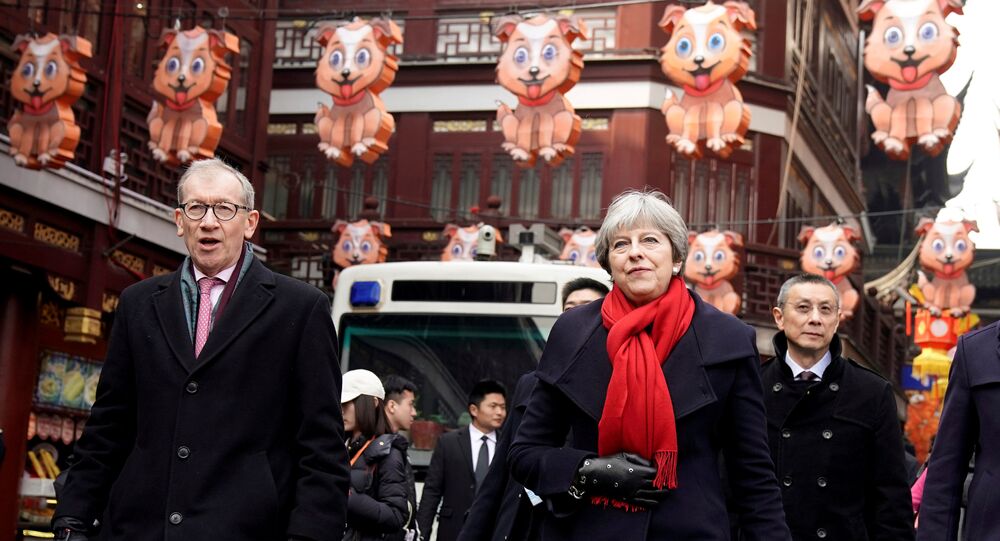 "Auntie May" From UK Conquers Chinese During Official Trip

Britain's Prime Minister, nicknamed “Aunty May” in Chinese social media is spending three days on a state visit to China, aimed at strengthening Sino-British ties, but it's not all about business.

UK's Prime Minister Theresa May is continuing her official visit to China, with the third and final day being Friday.

During meetings with Chinese leader Xi Jinping, May reaffirmed that the “Golden Era” of bilateral relations between UK and China must continue, it was initially proclaimed back in October 2015 during Xi's visit to Britain.

"The two countries need to enhance mutual understanding, respect and consider each other's core interests and major concerns, and deal with sensitive issues in a constructive way," said Xi during talks with May.

.@theresa_may: “what I am showing here in China is how we can ensure that we actually enhance our trade with the rest of the world as well. Why do we want to do that, because it is good for people in Britain, it's good for jobs in Britain”. pic.twitter.com/tj4cJXdJCv

The two countries also signed a large number of deals in areas including trade, finance, health care and smart cities as trade links and Chinese investment into the UK continues to grow.

The prime minister has been accompanied by the heads of over 50 British business and commercial organizations.

"I have been pleased to bring a very large business delegation here who had a very successful visit," she said.

But, trade deals aside, Theresa May has also won over the Chinese who dubbed her "Auntie May." The name was given to her by the younger generation of Chinese who are fond of British culture according to the China Plus news website.

Theresa May was in fact directly asked by Chinese broadcaster CCTV whether she knew about her nickname.

"A lot of Chinese people would affectionately call you, in Chinese, ‘Auntie May’. That’s really a kind of a call for Chinese — you’re one of the members of the family. Do you like that?," the CCTV anchor said.

While the Prime Minister replied that she's "honoured by that."

British Prime Minister #TheresaMay, nicknamed #AuntieMay by Chinese netizens, had a one-day tour of Beijing on Thursday, the second day of her three-day trade mission to #China. https://t.co/NFUwit7sVp pic.twitter.com/XEI1lOody4

The visit also received great attention among Chinese social media users, who were worried that she doesn't get too cold during her many official events, especially when she arrived at Beijing's Forbidden City wearing a skirt.

Theresa May was invited to watch the colourful traditional dance as she made a three-day visit to China. pic.twitter.com/RW1eNdPFhG

Some took to the Chinese version of Twitter — Weibo — to voice their concern for May.

“We Beijing can be cold, you can wear socks,” said one user.

Another commented: “I propose to send a pair of autumn trousers, plus a pair of red like aunt Mei high heels shoes.”

“Aunt Mei, your legs are not cold?” wrote others.

While the Chinese were excited receive UK's Prime Minister, this wasn't the case back home in Britain.

Looks like she's having a jolly before she is forced to resign.

Wonder if Chinese "Aunty May" is playing on the indecisive, will she, won't she? #May

Theresa May has been in China trying to hawk UK goods, give a positive spin on Brexit… but the World knows how badly it is going. They can see the devaluation of the £pound, the wage stagnation, the inflation, the stalling of growth — the desparate situation! #BrexitShambles pic.twitter.com/edwwuxt3I0

Some didn't even want her to come back.

Any chance they can keep her?

But she'll be back to face growing accusations of poor leadership, boring policies, and weakness over Brexit.