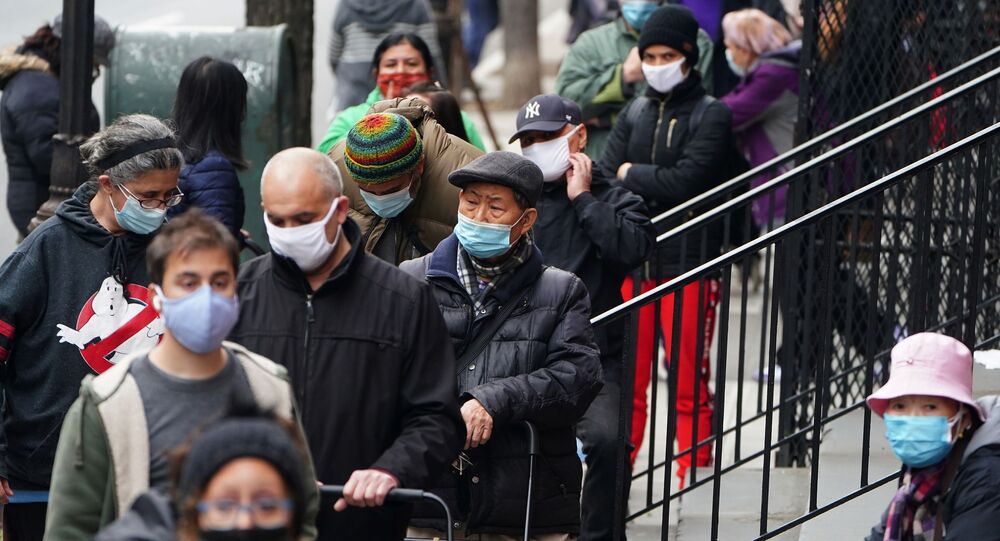 A Breakdown of the $900 Billion US COVID-19 Relief Package

US congressional leaders announced on 20 December they had finally agreed on a new coronavirus relief bill which was previously bogged down in protracted negotiations, with both chambers of Congress initially passing a stopgap measure on Sunday evening to extend federal funding by 24 hours to avoid a government shutdown.

An agreement on a $900 billion (€735-billion) economic relief package for the COVID-19 pandemic-hit economy was announced by US congressional leaders on Sunday after a long-delayed effort that had been mired in wrangling between Republicans and Democrats.

“We've agreed to a package of nearly $900 billion. It is packed with targeted policies to help struggling Americans who have already waited too long," Republican Senate Majority Leader Mitch McConnell said in a statement.

BREAKING: As the American people continue battling the coronavirus this holiday season, they will not be on their own.

Congress has just reached an agreement. We will pass another rescue package ASAP. More help is on the way.

"Today, we have reached an agreement with Republicans and the White House on an emergency coronavirus relief and omnibus package that delivers urgently needed funds to save the lives and livelihoods of the American people as the virus accelerates," said US House Speaker Nancy Pelosi and Schumer in a statement.

To grant lawmakers more time to hammer out the relief package - the second-largest in US history - the two chambers of Congress had passed a stopgap measure on Sunday evening to extend federal funding by 24 hours to dodge a government shutdown.

​The Democratic-led House of Representatives is expected to vote on the bill on Monday, followed by the Republican-controlled Senate. If passed, the deal, the text of which has not yet been released, will have to be signed into law by sitting US President Donald Trump.

According to a summary of the Bill released by House of Representatives Speaker Nancy Pelosi and Senate Democratic Leader Chuck Schumer, and Reuters interviews with several congressional aides, here is what the package offers:

Democrats said it would put $284 billion into Paycheck Protection Program small business loans, and include funds for loans from small and minority-owned lenders. It would direct another $20 billion to small business grants and $15 billion to live event venues.

The relief package is to establish temporary $300 per week supplemental jobless benefits, while keeping in place programs that expanded unemployment insurance eligibility amid the pandemic.

As people struggle with job loss as fallout from the pandemic, $25 billion are to go towards rent and utility payment assistance, with an extension of the eviction moratorium until 31 January. States will receive a minimum of $200 million in assistance.

On payroll loans, $284 billion is to be allocated towards government payroll loans, including expanded eligibility for nonprofits, newspaper, TV and radio broadcasters, $15 billion for live venues, independent movie theaters, and cultural institutions and $20 billion for targeted disaster grants.

$12 billion are to be set aside for minority owned and very small businesses that previously had difficulty accessing Payroll Protection Program financing.

Also, Congress is reportedly agreeing to convert a $10 billion loan approved in March into direct funding for US Postal Service without requiring repayment.

The new legislation is setting aside $82 billion for colleges and schools, including for heating-and-cooling system upgrades to deal with coronavirus transmission and reopen classrooms.

As part of expanded Pell Grants, new grants for college tuition are anticipated to be offered to 500,000 new recipients.

Some $10 billion are designated for childcare assistance, including $54.3 billion for K-12 schools (from kindergarten to 12th grade) and $22.7 billion for higher education.
A special section is designed to aid farmers, with $13 billion are scheduled to be channeled into direct payments, purchases and loans to farmers and ranchers.

Legislation seeks to enhance access to broadband internet as $7 billion will be set aside for the purpose.
This includes $1.9 billion to replace telecom network equipment that allegedly poses ‘national security risks, with $3.2 billion towards a new temporary benefit program to help low-income Americans get access to broadband service.

On vaccine distribution aid, $30 billion are earmarked to support procurement and distribution of the coronavirus vaccine, “ensuring it’s free and rapidly distributed to everyone.”

Regarding medical billing, insured patients will only need to pay in-network costs in cases when an emergency or other issue obliges them to seek out a medical provider who isn’t covered by their network.
$4 billion are also earmarked towards an international ‘vaccine alliance’ amid the ongoing COVID-19 pandemic.

Chuck Schumer stressed that Democrats would push for more relief in the new year, as earlier, President-Elect Joe Biden said in a statement that the $900 billion plan “provides critical temporary support” but “is just the beginning.”