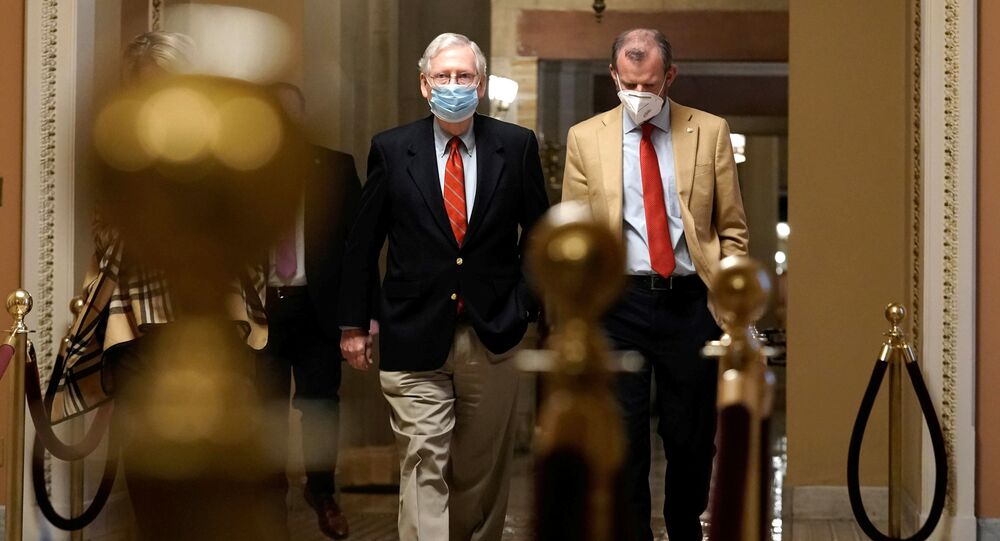 The United States remains the nation worst affected in the coronavirus pandemic, as it has registered over 17 million cases and more than 317,000 related deaths, according to Johns Hopkins University data.

US Senate Majority Leader Mitch McConnell announced on Sunday that Congress had reached an agreement on a COVID-19 relief package, saying that "another rescue package" will be passed as soon as possible.

"As the American people continue battling the coronavirus this holiday season, they will not be on their own", McConnell tweeted. "Congress has just reached an agreement. We will pass another rescue package ASAP. More help is on the way."

The reached deal will include roughly $900 billion in coronavirus aid, along with a $1.4 trillion bill to fund the government until 1 October, 2021. Congress must pass the bill by the end of the day, Sunday, to avoid a government shutdown.

The package will reportedly provide $600 direct payments for individuals, while also rolling out additional unemployment payments of $300 a week and providing more aid for small businesses.

BREAKING: As the American people continue battling the coronavirus this holiday season, they will not be on their own.

Congress has just reached an agreement. We will pass another rescue package ASAP. More help is on the way.

After weeks of intense negotiation, we've reached an agreement on an emergency #COVIDrelief package.

It will deliver emergency relief to a nation in the throes of a genuine emergency. We must make law as soon as possible.

And then we need to do even more under President Biden.

Schumer, along with House Speaker Nancy Pelosi, issued a joint statement regarding the deal, saying that they are going to "crush the virus and put money in the pockets of the American people".

“Today, we have reached agreement with Republicans and the White House on an emergency coronavirus relief and omnibus package that delivers urgently needed funds to save the lives and livelihoods of the American people as the virus accelerates", the statement said. "The emergency relief in this agreement, the second largest in history only to the CARES Act, is an important first step that Democrats look forward to building on under the new Biden-Harris Administration to meet the remaining needs of the American people during this historic health and economic crisis."

Pelosi and Schumer also asserted that the agreement does not include "several dangerous Republican proposals, including a long-demanded GOP provision that could unjustly put the health of workers at risk and take away their legal recourse, as well as an 11th hour attempt to sabotage the incoming administration’s ability to stabilize the economy and save jobs".

The mammoth deal was achieved after months of compromise on government funding and coronavirus relief. Earlier in the week, House Majority Leader Steny Hoyer told reporters that there were "still some significant issues outstanding" in the way of the $900-billion COVID relief package.

Earlier in the week, Chuck Schumer (D-NY) and Senator Pat Toomey (R-PA) reached an agreement on language resolving the dispute over the Federal Reserve’s lending facilities. Schumer tweeted that "this emergency #COVIDrelief won’t include provisions that would gratuitously limit the Fed's authority & hamstring the Biden admin".

Toomey praised the agreement as a "win for taxpayers and for an independent Fed".

"Win for taxpayers and for an independent Fed. Repurposes $429 billion in unused CARES Act funds to help pay for the new relief. Closes CARES Act lending facilities, blocks restart/copycats- stops Dems from using the Fed to circumvent Congress for policies they can't get enacted", he tweeted.

Now that an agreement on the coronavirus relief bill has been reached, it will move to the Democratic-led House of Representatives and then pass on to the Republican-dominated Senate. If passed, it will then head to the US President Donald Trump to be signed into law.

The previous coronavirus relief bill, dubbed the CARES Act, was signed into law by Trump in March, envisaging $300 billion in direct payments to Americans (with each adult receiving $1,200), $260 billion in increased unemployment benefits and providing forgivable loans for small businesses with $350 billion, along with other measures.