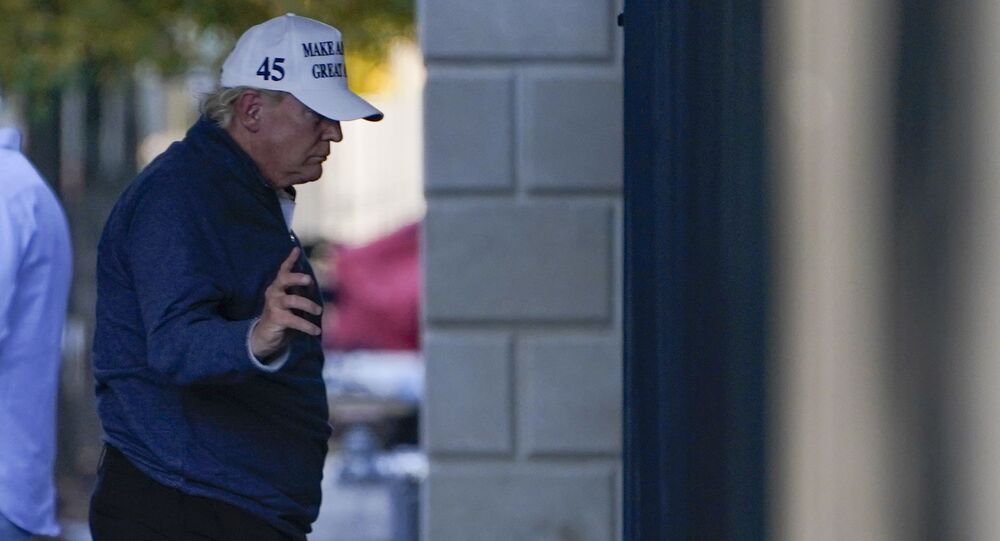 Earlier on Saturday, US media called the two crucial US states of Pennsylvania and Nevada, with their 26 total electoral votes, for Democratic candidate Joe Biden, pushing the his projected total of votes from 264 to 290, twenty votes above the number needed to win the race presidency against Republican President Donald Trump.

London's iconic Madame Tussauds wax museum on Saturday announced that it had redressed the wax figure of US President Donald Trump in “his favourite sport” in order to “reflect his potential 2021 wardrobe”, as his Democratic rival Joe Biden is now projected to win the US 2020 presidential election.

Earlier in the day, the former US vice president declared his victory in the White House race after a number of US media outlets called him for the win in two crucial states of Pennsylvania and Nevada, with their 26 electoral votes, pushing his total of electoral votes over the limit needed to win the presidency.

“His campaign may not have been a hole in one, but @realDonaldTrump is now on course to dedicate more of his time to his favourite sport as #MadameTussaudsLondon re-dresses his figure in golfing attire to reflect his potential 2021 wardrobe,” the wax museum tweeted.

Madame Tussauds posted an image featuring the Trump wax figure dressed in golfing outfit – a violet shirt, chequered trousers, and a red “Trump 2020” cap, alongside a set of golf-clubs.

His campaign may not have been a hole in one, but @realDonaldTrump is now on course to dedicate more of his time to his favourite sport as #MadameTussaudsLondon re-dresses his figure in golfing attire to reflect his potential 2021 wardrobe 📷 @PA pic.twitter.com/pGUs8jKOnW

A video of the re-dressing process of the US president’s wax figure was also posted online.

Donald Trump's wax figure has been re-dressed into golf attire at Madame Tussauds, London, after Joe Biden was named the winner in the #USElectionResults2020 pic.twitter.com/A7g2gkK1Fc

On Saturday, Trump was been spotted playing golf at the time when the news broke that he had been defeated in the 2020 presidential election against Democratic candidate Biden.

Later in the day, in response to Biden’s reported White House win, Trump said that the Democratic candidate “has not been certified as the winner of any state”, adding that his re-election campaign will begin asserting its claim to victory in the election in the courts as soon as on Monday.

“Beginning Monday, our campaign will start prosecuting our case in court to ensure election laws are fully upheld and the rightful winner is seated,” Trump said, as the official results have not been released yet.

BREAKING: Statement from the Trump campaign:

“Joe Biden has not been certified as the winner of any states.”

“Beginning Monday, our campaign will start prosecuting our case in court to ensure election laws are fully upheld and the rightful winner is seated.” pic.twitter.com/BQa5L8Epo5