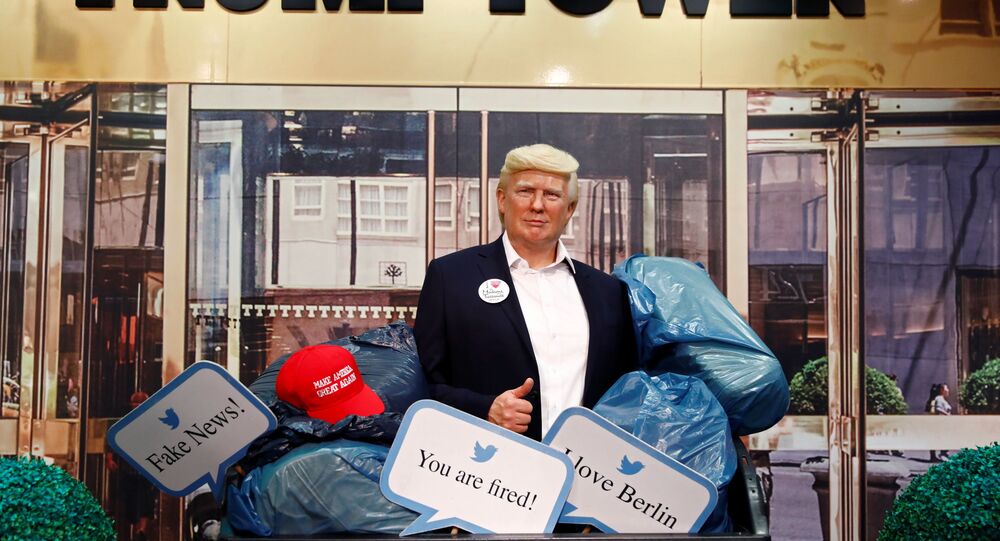 Not Biased At All: Netizens Blast Madame Tussauds for 'Dumping' Trump's Wax Figure

This is not the first time that the famous museum has used the 45th president to make a statement. During the summer its affiliate in New York put a face mask on the wax figure of Donald Trump in order to encourage US citizens to wear them to stop the spread of the coronavirus as America tops the list of those affected by the infectious disease.

Madame Tussauds wax museum in Berlin has made a bizarre move by dumping Donald Trump's figure from its exhibit. The Berlin affiliate literally put the 45th president of the United States in a dumpster with a sign saying "Dump Trump Make America Great Again". The wax figure of the Republican was also accompanied by trash bags, the famous red MAGA cap, and images of tweets that read: "Fake News!; You are fired!; I love Berlin".

Madame Tussauds in Berlin has a new Trump exhibit. pic.twitter.com/p89RVuWWvr

​The museum's marketing manager Orkide Yalcindag said the move is "rather of a symbolic character ahead of the elections in the United States". He added that the figure was removed "as a preparatory measure" without elaborating.

Wax figures of former US presidents like Barack Obama are still on display in the museum. Reuters, which first reported on the story, said that the wax figure of Trump is likely to be brought back.

The news caused backlash on social media, with netizens criticising the museum's decision.

So hateful. They should be ashamed!

Unacceptable, This isn't right. He is still people's representative.

Not right at all.

​Even people who are not Trump supporters contended that the move was inappropriate.

So much for Madame Tussauds adopting a position without political bias. I'm not a fan of Trump by any means, but this is just childish.

The more there is shallow mockery like this, the stronger Trump's claim is that the media is bias. As a non-American, I agree that Trump is indeed repulsive in some aspect, but he was indeed winning up to until covid-19 started. To treat him like an utter failure is just unfair.

​Other netizens found the museum's move disrespectful to the United States and Americans and noted that it would soon make a U-turn after the Republican wins the upcoming presidential elections.

Seems pretty disrespectful to do do the nation that has protected you for 70 years after you set the world on fire.

Hmmmm they look a little silly in a few days time..

​However, there were those who praised the museum.

You put him where he BELONGS!!!

​The development comes three days before the 2020 presidential elections in the US. According to polls, Democratic presidential candidate Joe Biden has been ahead of Trump in most states for months. However, the Republican has recently narrowed his lead. A survey conducted by Fox News shows the former VP leading by a 52-44 percent margin. Two percent of likely voters support a third-party candidate, while the remaining two percent are still undecided.

Chief pollster from the Trafalgar Group, Robert Cahaly, told Fox News that Donald Trump is going to win the election due to the "hidden Trump vote", which is not reflected in the polls.