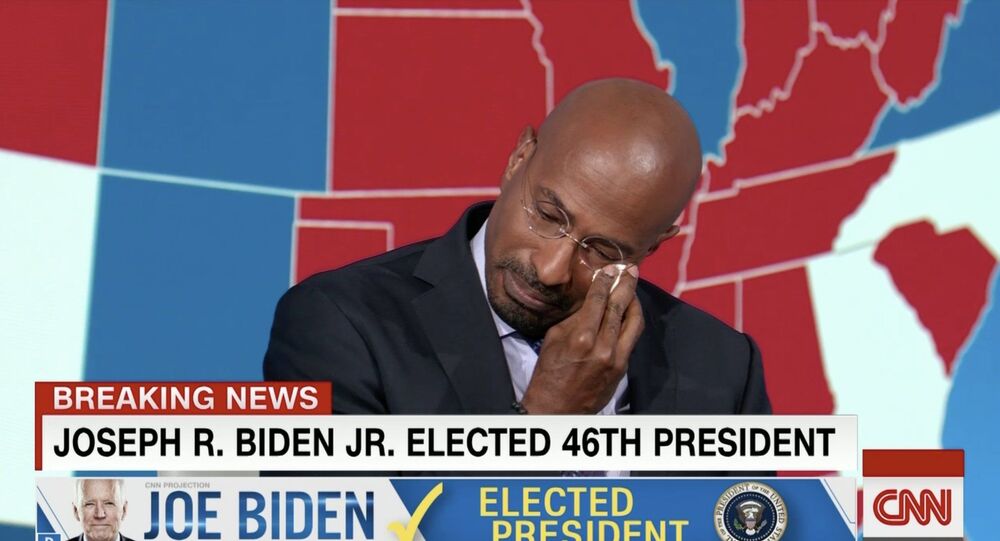 On Saturday, Democratic candidate and former US Vice President Joe Biden, declared himself the winner of the 2020 presidential election over Republican President Donald Trump, after Pennsylvania and Nevada were called for him by media outlets, pushing his electoral vote total from 264 to 290 votes, 20 votes higher than needed to win.

Jones broke down in tears live on-air while expressing why Biden’s potential victory in the heated race “matters”, at a time when Trump’s projected defeat “is a big deal” for the American nation “to get some peace”.

Jones, an ex-advisor to former US President Barack Obama, said that Trump’s expected defeat will make it “easier for a whole lot of people” living in the United States, including the Muslim community and immigrant families.

“And it’s easier for a whole lot of people. If you’re Muslim in this country, you don’t have to worry if the president doesn’t want you here. If you’re an immigrant, you don’t have to worry about your babies being snatched away or send DREAMers back for no reason. It’s vindication for a lot of people who have really suffered,” he said, while wiping tears from his eyes.

Watch Van Jones after the call for Biden. Just watch this. pic.twitter.com/Us8jpKu79f

He also referred to the famous phrase “I can’t breathe” gasped by African-American George Floyd just before his death, killed by white police officers in Minnesota in May, arguing that “a lot of people have felt they couldn’t breathe” under the Trump presidency.

“‘I can’t breathe,’ that wasn’t just George Floyd. A lot of people have felt they couldn’t breathe. Every day you’re waking up and getting tweets,” Jones stated. “You’ve spent so much of your life energy just trying to hold it together. And this is a big deal for us to get some peace.”

In late October, Jones, a harsh critic of the Republican president, acknowledged that “there’s a side to Donald Trump that I think he does not get enough credit for”. He explained that the president has done “good stuff for the black community”, such as criminal justice reform and providing funding for black colleges.

“Donald Trump — and I get beat up by liberals every time I say this, but I’m gonna keep saying it — he has done good stuff for the black community,” Jones said in late October, quoted by The New York Post. “Opportunity zone stuff, black college stuff. I worked with him on criminal justice stuff. I saw Donald Trump have African American people, formerly incarcerated, in the White House — embraced them, treated them well. There’s a side to Donald Trump that I think he does not get enough credit for.”

Earlier on Saturday, Joe Biden and his vice-presidential running mate, California Senator Kamala Harris, announced their victory in the 3 November presidential election against Trump after the two crucial states of Pennsylvania and Nevada, with their 20 and 6 electoral votes, respectively, were called by media outlets, pushing Biden's electoral vote total from 264 to 290, while the incumbent president has only 214 votes.

As the official results of the election have not yet been announced, Trump said in a statement on Saturday that his campaign will begin asserting its claim to victory in the election in the courts on Monday.

“Beginning Monday, our campaign will start prosecuting our case in court to ensure election laws are fully upheld and the rightful winner is seated,” Trump said.

BREAKING: Statement from the Trump campaign:

“Joe Biden has not been certified as the winner of any states.”

“Beginning Monday, our campaign will start prosecuting our case in court to ensure election laws are fully upheld and the rightful winner is seated.” pic.twitter.com/BQa5L8Epo5

Joe Biden Indicated as President-Elect on His Official Twitter Page