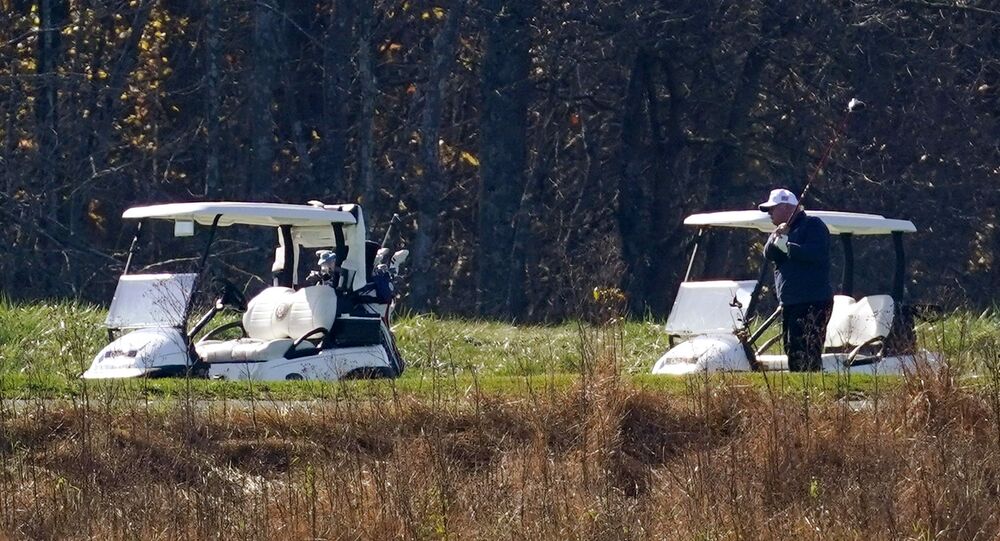 President Trump has been famous for his love of playing golf amid stressful situations, as many criticise him for being at his golf courses during the coronavirus pandemic and nationwide protests against racial injustice and police violence.

Amid the ongoing celebration of Democratic candidate Joe Biden's projected victory in the US presidential election, the Associated Press appeared to have caught a shot of sitting President Donald Trump playing golf in Sterling.

The shot did not surprise social media users, who appear to be accustomed to Trump playing golf in any situation, as they said that it was "refreshingly normal" for POTUS to enjoy golfing while he is projected to lose the presidential election.​

President Trump finishes up his round of golf—which in the middle of, Joe Biden was declared the winner of #Election2020. pic.twitter.com/UEaqFgZmZl

​According to other videos shared on social media, Biden-Harris supporters gathered in the vicinity of the golf club as Trump left it, whistling and holding up pro-Biden posters.

​Commenting on Trump's golf session amid the projected failure of his re-election campaign, netizens noted that he seemed "awfully relaxed for someone who is loosing[sic]".

he seems awfully relaxed for someone who is loosing.

It’s refreshingly normal for Donald Trump to be on a golf course while the result of a presidential election is announced.

lmao is this this actually true

Some suggested how Trump would react "when he finds out".

Trump when he finds out. pic.twitter.com/t3J9L9wuyw

​Others did not miss a chance to pique Trump on his love for golfing.

Considering that golfing and holding rallies is all he does, it makes sense.

Mans lost his job on his day off!

Appropriate considering that’s where he - and our tax dollars - spent most of his “presidency”.

​Trump has been repeatedly criticised for his golf sessions, with people denouncing him for playing amid the coronavirus pandemic and anti-racism and anti-police-brutality protests in the United States.