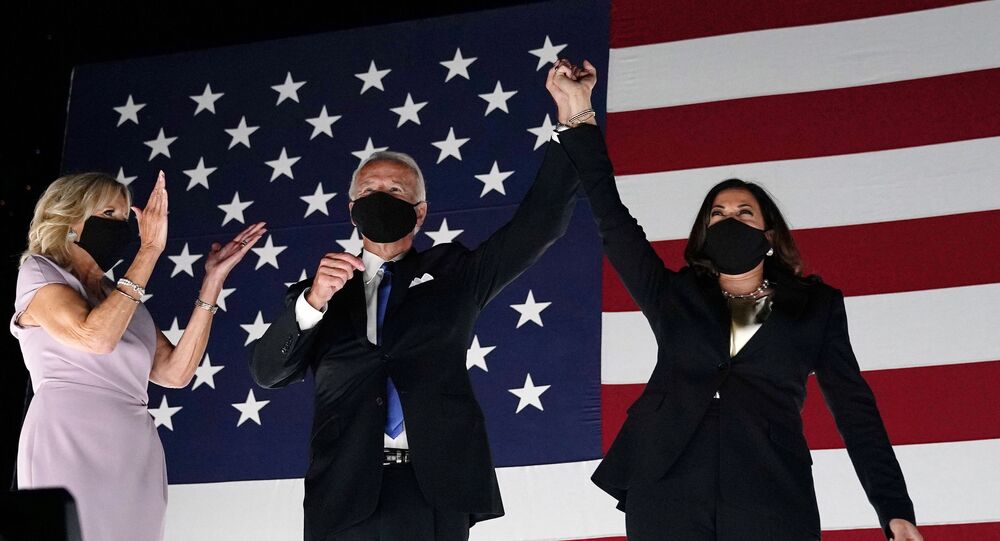 While vote counting is continuing in several states, Democratic nominee Joe Biden has declared himself the winner in the US election. However, incumbent US President Donald Trump has stated that the race is far from being over and has vowed to wage a legal battle over the election outcome that is set to start on 9 November.

Soon after the first media outlet announced that Democrat Joe Biden was projected to get over the 270 Electoral College votes needed for him to become the next US president, global leaders and allies from the Democratic Party rushed to congratulate him. Among the first to do so was Justin Trudeau, the prime minister of the US' northern neighbour Canada.

"I look forward to working with President-elect Biden, Vice President-elect [Kamala] Harris, their administration, and the United States Congress as we tackle the world's greatest challenges together", Trudeau said in a statement.

He was soon joined by the leaders of three major European states – France, Germany and the UK. French President Emmanuel Macron has sent his congratulations via Twitter, urging Biden to "work together" in order to deal with the numerous "challenges" that exist today. UK Prime Minister Boris Johnson also extended his regards to the projected winner in the US presidential race, adding that he is looking forward to work with the new administration.

Several German officials, including Chancellor Angela Merkel and Foreign Minister Heiko Maas, have also joined in offering their congratulations, welcoming the arrival of "clear figures" in the US presidential election.

"We look forward to working with the next US government. We want to invest in our cooperation for a new transatlantic beginning, a new deal", Maas said via Twitter.

Ireland’s Prime Minister Micheal Martin hailed the projected victory of President-elect Joe Biden, whom he called a "true friend of [the] nation" and added that he looks forward to working with the Democrat. Austria's Chancellor Sebastian Kurz, in, turn extended his congratulations via Twitter, noting that the two states share a "system of values" that they must stand up for together. Another European leader, Greece’s Prime Minister Kyriakos Mitsotakis, has also joined the chorus of congratulations, expressing hope that the ties between the two countries will only grow stronger under the new administration.

Congratulations to @JoeBiden, the new President-elect of the United States. Europe and the United States share a system of values - values that we stand up for together. Looking forward to our future cooperation!

NATO Secretary General Jens Stoltenberg has welcomed the projected victory of Democrat Joe Biden, saying he is looking forward to working with the man, whom he called a "strong supporter" of the transatlantic alliance.

World leaders are not the only ones who have hailed the projected victory of Joe Biden, as his Democratic allies have also joined in. Biden's running mate Kamala Harris was among the first to do so, after apparently receiving the news in the middle of a jogging session.

US President Barack Obama, who had Biden as his running mate in 2008 and 2012, has congratulated both Biden and Harris, calling the two his friends, on their "historic and decisive victory", as well as the former vice president’s wife, Jill Biden, on becoming the next first lady.

Trump's former opponent in the 2016 presidential election, Hillary Clinton, has hailed the "history making ticket" for their expected victory in the presidential race, which, she argued, would mark a "new page for America" and be "a repudiation of Trump".

Joe Biden Indicated as President-Elect on His Official Twitter Page