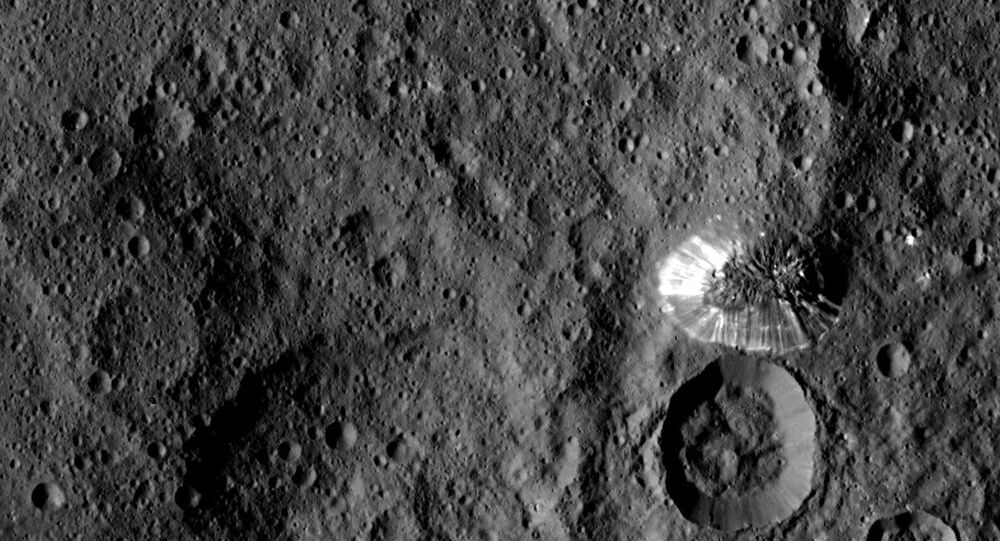 Astronomers Shed Light on Mystery of Pyramid on Dwarf Planet

The mysterious Ahuna Mons, which towers over the surface of the dwarf planet Ceres, located in the asteroid belt between Mars and Jupiter, has turned out to be not just an extinct ice volcano, but its “mud” cousin with a very unusual birth history, reveal a team of scientists who have published an article in the journal Nature Geoscience.

“At a certain time, in the depths of Ceres, under the mountain of Akhun, a kind of “bubble” was formed, consisting of brine, clay and various stony rocks. The rocks in this region of the planet were not solid, but mobile and liquid. Due to this, it rose to its surface, froze and formed a giant mud volcano”, - says Vladimir Wladimir Neumann from the University of Münster, Germany.

The first pictures of Ceres taken by NASA's Dawn probe, sent in March 2015 to the 940-km-diameter dwarf planet, predominantly composed of silicates and water ice, revealed an unusual sight: mysterious reflective white spots in the Okkator crater, traces of a thick “brine”, and the unusual pyramid-like structure of Ahuna Mons, which stands some four kilometres tall.
The images conjured notions of alien pyramids in the far reaches of the solar system.

Subsequently, scientists working with the Dawn probe team discovered that Ahuna Mons was an ancient, already “extinct” cryovolcano, and the white spots turned out to be the source of Ceres’s temporal atmosphere, consisting of water vapor.

© AFP 2021 / Khaled Desouki
Life on the Moon? 'Lunar Pyramid' Spotted in NASA Image Sparks Speculation Aliens Were in Egypt
In other parts of the dwarf planet the team found deposits of "pure" ice, indicating that the surface of Ceres is constantly regenerating, since the ice should have evaporated into space long since.

Such discoveries led some scientists to suggest that Ceres, in its depths, may conceal a frozen or still existing subglacial ocean filled with a kind of “brine” or pure water that is warmed by a yet-unknown source.

The existence of this ocean, as well as the height of the pyramid structure of Ahuna Mons, had scientists debating on how both of these objects could arise and why the only known volcano of Ceres has not yet “self-dispersed” across the surface.

Neuman and his colleagues found the answer to both questions by analysing data that Dawn collected during its flights over this mysterious pyramid in the last months of its work on the dwarf’s orbit.

Data revealed a rather large gravitational anomaly under Akuna Mons. By modelling the anomaly with a mass concentration method, they determined that the subsurface structure includes a regional mantle uplift, interpreted as a plume.

This, according to scientists, could hardly have happened as a result of an asteroid impact, since the inner layers of the “lithosphere” of the dwarf planet are located at a great depth.

Judging by the shape of the anomaly, it arose as a result of the fact that part of the mantle, made up of ice and rocks, "broke away", melted and began to rise to the surface of Ceres.

Something similar often happens today in the bowels of the Earth, when so-called plumes are formed in them, with vertical flows of hot lava quickly rising to the surface.

© Flickr / Sam valadi
Space Tech: Muon Scanner Finds Hidden Chamber Inside Bent Pyramid
In this case, its role was played not by molten rocks, but by a mixture of water, clay, and rocks, melted by heat from Ceres’s core.

The lion’s share of this “mud bubble”, as scientists assume, froze before it reached the surface, but the lightest and hottest part reached it and formed Akuna Mons.

Considering that this mud volcano appeared on a dwarf planet relatively recently, it is possible that similar structures may appear on Ceres in the future, scientists conclude.