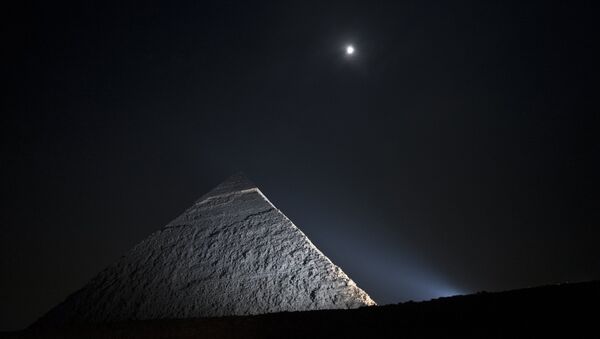 The origin of the pyramids of Egypt has fired the human imagination for centuries, and it is often asked who the true pyramid builders were. Those who 'want to believe' now speculate that the answer can be found on our planet's only natural satellite.

Alien conspiracy theories are swirling after an E.T. enthusiast spotted traces of intelligent life on the Moon.

The 'discovery' was made by a YouTuber going by the handle Pacitto Dominique, who was apparently exploring old high-resolution photos of the Moon's surface taken by NASA's Lunar Reconnaissance Orbiter.

One of the photos shows what looks like a pyramid-shaped object sitting at the centre of a huge crater.

"It was a three sided pyramid with a single dark window going along one side," self-styled UFO expert Scott C. Warring wrote on his popular conspiracy theory website etdatabase.com.

"The question remains, is this definitive proof that the pyramids in Egypt were built by aliens from our moon? It seems so," he concluded.

While the origin of the object in question is yet unclear (it could be a simple boulder), this is not the first time the possible existence of pyramids on the Moon has had alien hunters in a frenzy.

An actual grainy photograph snapped by one of the Apollo 17 mission members in 1972, which shows a dark pyramidal structure in a light background, sparked claims several years ago that there has been a civilisation on the Moon.

However, considering the sequence of pictures in the mission's repository of images, it appears that the "pyramid sighting" was in fact a low-quality photo of the floor of the lunar rover.