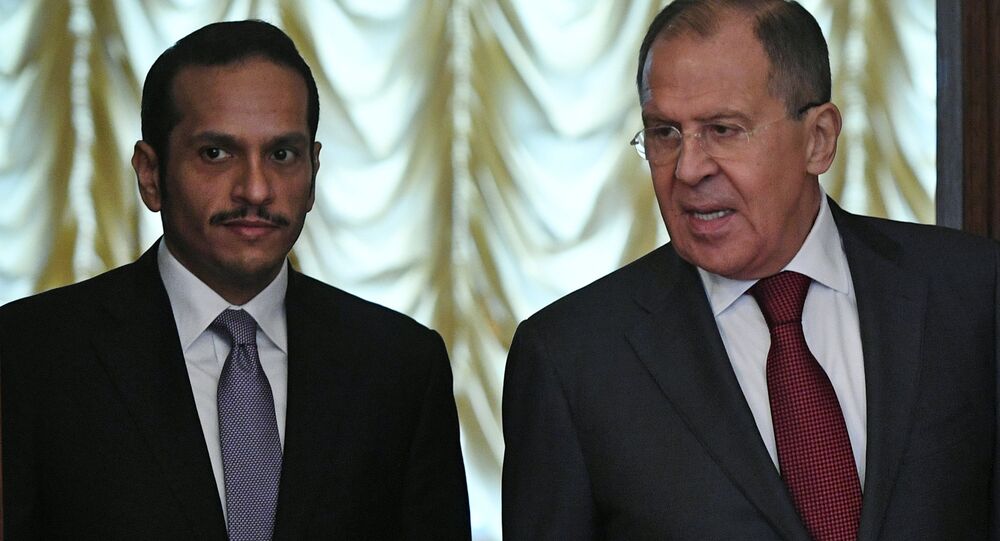 Russia will continue dialogue with Qatar on all issues that are of interest to both countries, including the recent escalation of tensions in the Arab world, Russian Foreign Minister Sergei Lavrov said Saturday during a meeting with Qatari Foreign Minister Mohammed Al Thani.

MOSCOW, June 10 (Sputnik) — Lavrov expressed Russia's concern over the escalation between Qatar and some Arab states.

"The reports about this escalation, the steps taken by some Arab countries on severing ties with Qatar raised concerns [in Moscow]," the Russian foreign minister told his Qatari counterpart.

© REUTERS / Naseem Zeitoon
How Russia Could Mediate Settlement of Saudi-Qatar Diplomatic Crisis
"Today, we will continue the dialogue between our countries on all issues of mutual interest. For sure, among these issues, there will be recent escalation of situation in the Arab world," Lavrov said.

He emphasized that Moscow does not want to interfere in the domestic affairs of other countries or bilateral relations between them, but situation around Qatar raises concerns in Russia and therefore Moscow stands for dialogue to settle disagreements between the Arab countries.

"In line with our principles, we interfere neither in the domestic affairs of other countries nor in their bilateral relations. However, we cannot be glad about the situation, when relations between our partners are getting worse."

The Russian foreign minister stressed that Russia promotes direct dialogue as a means of solving disagreement.

"Only through direct dialogue it is possible to better understand each other's concerns, look at the ways of solving these concerns, ensure transparency in all these issues," Lavrov added.

Moscow is convinced that the main threat posed to the Gulf countries is terrorism, so it is necessary to ensure the unity of the states in the region and the external players for countering it effectively, he said.

"Of course, it is necessary to see the important thing behind what is going on. And the important thing, we believe, is that for the states of the region as well as outside the region, the main threat today is terrorism. It is crucially important to concentrate on the cooperation and uniting the efforts for preventing and neutralizing this threat."

"It is absolutely obvious for us that for the most effective actions on this front it is important to secure unity of the Arab League, the Cooperation Council for the Arab States of the Gulf, as well as all other countries of the region and countries outside the region," Lavrov stressed.

The minister noted that, "from these positions we are maintaining contacts with the majority of the participants of the ongoing processes, the telephone talks of Russian president [Vladimir Putin] and his colleagues in the region are carried out."

The Maldives took the same step, citing extremism and terrorism concerns. Mauritius joined the boycott. Mauritania broke off diplomatic ties with Qatar while Jordan downgraded ties with the country on June 6. The Comoros joined the campaign on June 7.