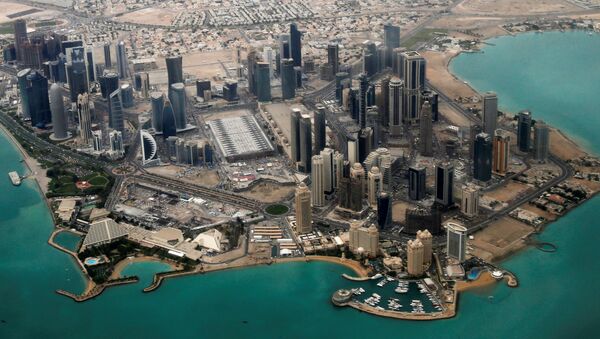 Russian FM Says Qatar Row's Influence on Syria Addressed With Iran's Zarif
The visit will take place amid the ongoing diplomatic spat between Qatar and a number of Arab states.

On June 5, Bahrain, Saudi Arabia, Egypt, the United Arab Emirates (UAE), Yemen, Libya, the Maldives and Mauritius severed diplomatic relations with Qatar. The states accused Qatar of supporting terrorist groups, as well as of interfering in other countries' domestic affairs.

The Qatari Foreign Ministry rejected the accusations of interference in other countries' domestic affairs and said that Doha will not take responsive measures.

Why Saudi Arabia 'Punishes' Qatar and How Doha Could Respond
The Qatari government claimed that the formal reason for the conflict was a story on the website of Qatar’s news agency on May 23. The story attributed false remarks to the Qatari emir, in which he made friendly comments about Iran and expressed support for the Muslim Brotherhood.

The incident took place a week after the Arab Islamic American Summit in the Saudi capital of Riyadh. Later, the Qatari Foreign Ministry said that the website was hacked and the remarks were falsely attributed to the nation’s leader.

However, Saudi Arabia, the UAE and Bahrain continue to insist that Qatar must expel members of Hamas and other groups regarded by its neighbors as terrorists.

In turn, Doha has denied the allegations of sponsoring terrorism and continues to insist on the cyberattack version, but no suggestion has been made on who could have behind the hack.

Claims of 'Russian Hackers' in Qatar Seen as Attempt to Pit US, Russia
Meanwhile, CNN was quick to bring up "Russian hackers." According to CNN, US investigators believe that hackers related to Moscow planted the fake news story to the website of Qatar’s news agency. Unnamed US officials told CNN that the goal of the hack was to cause rifts among Washington and its allies in the Middle East, including Qatar.

Kremlin Spokesperson Dmitry Peskov responded to the allegations, calling them another "fake news story" published with reference to "unnamed sources in unnamed department of some unknown intelligence service."

Sources in the Russian Embassy in Qatar told Sputnik that the Qatari government did not contact Russian diplomats over Russia’s alleged involvement in the incident.

Success of Kuwait's Mediation of Arab States-Qatar Row Depends Solely on Doha
In addition to the cut off of diplomatic ties, Saudi Arabia, Egypt, Bahrein and the UAE have suspended transport connection with Qatar and imposed an embargo on food supplies.

An economic and political blockade prompted Qatar to ask Kuwait to play the role of a mediator in the crisis. Earlier this week, the Kuwaiti emir held talks with the Saudi king and visited the UAE.

It is unclear whether this shuttle diplomacy will work or not, but in 2014, it was Kuwait that managed to settle a crisis between Qatar and its neighbors. However, this time Doha is being accused of breaching an agreement to stop supporting Shia organizations after the 2014 crisis.

Russia to Closely Examine Claims of Qatar's Support for Terrorism
Russia has taken a balanced approached to the diplomatic crisis in the Middle East. Foreign Minister Sergei Lavrov said that the conflict was "their business, the bilateral ties of other states," adding that Moscow would not interfere in these relations.

He added that Russia is interested in having normal relations with all nations in the Middle East.

"We are convinced that any divisions can take place. We were never happy over the difficulties that arose in relations of other countries. We are interested in maintaining friendly relations with everyone, especially in the region where concentration of all efforts of fighting a joint threat, the threat of international terrorism, is a priority," Lavrov told a press conference.

According to the minister, it is important to resolve the tensions via negotiations.

Moscow has been discussing the crisis both with Doha and Russian allies in the region. Russian President Vladimir Putin held phone talks with Qatari Emir Tamim. As a result of the talks, Moscow reaffirmed that any crisis situation should be resolved through negotiations. Putin also discussed the Qatar crisis with Turkish President Recep Tayyip Erdogan.

Russia’s Role in the Crisis Settlement

Russian Deputy FM Discuss Qatar Issue With Saudi, Bahrain Ambassadors - Moscow
According to experts reached by Sputnik, Russia cannot and should not be the single mediator in the settlement, but it could take part in joint efforts.

Elena Suponina, an analyst at the Russia Institute for Strategic Studies, pointed out that Russia maintains good relations with all the parties involved in the spat.

"It is necessary not to side with one or the other party. Russia should use its contacts in the Middle East to reconcile the sides," the expert told Sputnik.

Diplomatic Rift With Qatar Plays Into Terrorists' Hands - Moscow
Boris Dolgov, a senior expert at the Institute for Oriental Studies, the Russian Academy of Sciences, suggested that rapprochement between Moscow and Doha as a result of the crisis is unlikely and would be undesirable for Russia.

"There are serious allegations against Qatar over sponsoring Islamic terrorist groups. This is very serious. In this situation, Russia does not need rapprochement with Qatar," Dolgov said.

The expert also pointed to the fact that the diplomatic blockade of Qatar has been endorsed by Russia’s partner Egypt.

"Today, ties between Moscow and Cairo are positively developing. Moreover, to a certain extent, Egypt’s allegations against Qatar are reasonable," Dolgov said.

According to him, there is no single reason for Russia to seek rapprochement with Qatar.