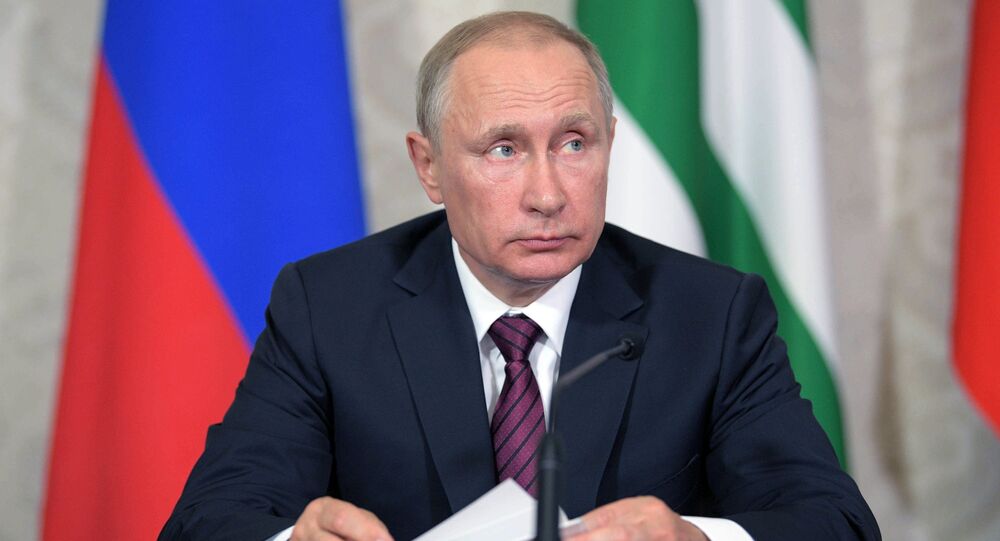 Russian President Vladimir Putin visited Abkhazia August 8, provoking condemnation from Western leaders - a NATO spokesperson said the visit was "detrimental" to efforts to find a "peaceful, negotiated" settlement in the region. The provocative nature of Western actions - both diplomatic and military - in states bordering Russia was unacknowledged.

Over the course of the trip, President Putin assured the young republic's leader Raul Khadjimba of Moscow's continued support for its independence, and announced the creation of a joint Russian-Abkhaz military contingent to ensure the nation's security.

"The most important thing is we have entirely special relations. We reliably guarantee the security, self-sufficiency and independence of Abkhazia. I am sure that will continue to be the case," he said at the meeting.

The visit coincided with the anniversary of the 2008 Russo-Georgian war, a conflict instigated by Georgia against South Ossetia and Abkhazia, in which Russian troops were dispatched to the region to protect inhabitants of the two "breakaway" countries.

The pair gained effective independence from Georgia in the wake of the Soviet Union's 1991 collapse — simmering ethnic tensions within Georgia between the minority Abkhaz and Georgians culminated in a 1992-1993 war, which resulted in Georgia's loss of control of the regions.

In response, a NATO spokesperson slammed the Russian Federation for not seeking approval for the meeting with Georgian authorities beforehand.

"President Putin's visit — on the ninth anniversary of the armed conflict — is detrimental to international efforts to find a peaceful and negotiated settlement," the NATO spokesperson said.

It's certainly true that securing a peaceful and negotiated settlement to the territorial dispute between Abkhazia and Georgia has proved elusive since the 1994 ceasefire agreement, although Georgia's intransigent insistence that the two states are in fact its own territory arguably ensures one will never be achieved.

Moreover, it is perhaps ironic Putin's visit was excoriated by NATO, given US Vice President arrived in Tbilisi a mere week prior, offering strong affirmation of US support for the country's sovereignty, and stating that under President Donald Trump's administration, the US would object to "any claim at any time by any nation" that undermines the "enduring" principle of territorial integrity.

Western leaders are a common sight in Georgia. US and EU representatives flocked to the capital as the country waged war on its tiny neighbors in 2008, offering effusive support. Moreover, NATO's drive to immerse Georgia into its folds has seen the military alliance dispatch mouthpieces at frequent intervals ever since the country was first promised NATO membership during the bloc's 2008 summit in Bucharest.

The country has been an active non-NATO US ally ever since, contributing thousands of troops to peacekeeping missions in Afghanistan, Africa, Balkans and Iraq. The EU has likewise sent its fair share of emissaries as part of its own push to absorb the country as a member state.

Georgian leaders are highly receptive to these recruitment drives, despite polls suggesting 82 percent of the public supports or somewhat supports maintaining close relations with Russia.

It's not just Western politicians that are recurrent fixtures in Eastern Europe — Western troops and weaponry, under the banner of NATO, are dotted extensively in countries throughout the region, many of which border Russia.

In fact, were it not for the existence of Belarus, the military alliance would have an unbroken line of NATO soldiers, numbering over 7,000, running north to south adjacent to the Federation.

It marks the largest buildup of foreign military forces in the region since World War II, and the infamous Operation Barbarossa, Nazi Germany's attempt to conquer the Soviet Union.

In Estonia for instance, 800 British, Danish and French soldiers are based at the Tapa base, about 50 miles from Tallinn, and the US-led NATO mission in Poland — growing all the time — numbers some 4,000 troops as of July 2017. Over 300 US marines are also on rotation in Norway, which shares a border with Russia inside the Arctic Circle.

© AP Photo / Czarek Sokolowski
US soldier stands next to a Patriot surface-to-air missile battery at an army base in Morag, Poland.

In Latvia and Lithuania around 1,200 troops, each from Canada and Germany, are deployed along with tanks and heavy armored vehicles, plus Bradley fighting vehicles and Paladin howitzers, whereas British Typhoon jets are deployed in Romania.

In July, it was announced that the US was considering deploying Patriot surface-to-air missiles in Estonia.

The danger is undoubtedly far greater than that posed by a state visit to a small aspirant republic by a crucial ally.