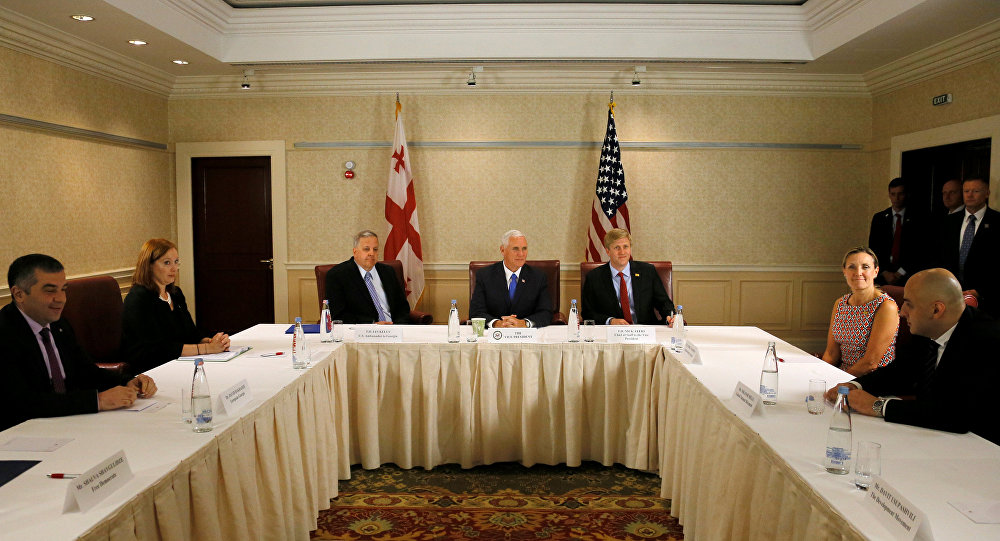 Georgian lawmaker and member of the foreign relations committee, George Tsereteli, said that from the Georgian perspective, trip of US Vice President Mike Pence to Tbilisi could be used to establish a wider trade package with the United States, including holding talks on a free trade agreement.

© AP Photo / Eric Gay
US, Georgia Sign Customs Agreement to Boost Security Cooperation - Border Agency
MOSCOW (Sputnik) — US Vice President Mike Pence’s visit to Tbilisi as part of his four-day trip to Estonia, Georgia and Montenegro, is not aimed at encouraging anti-Russian policies in Georgia but reasserting the US-Georgia continuing strategic cooperation under the new US administration, a Georgian lawmaker and member of the foreign relations committee, George Tsereteli, told Sputnik.

The US vice president arrived in Tbilisi on Monday to meet with Georgian President Giorgi Margvelashvili, Prime Minister Giorgi Kvirikashvili and other officials, as well as to visit US and Georgian troops participating in the Noble Partner drills.

"This visit is not against Russia, it is for Georgia and for developing this country. To develop its economy, to make it more resilient in these turbulent times and, of course, it is a matter of security," Tsereteli, who is also a vice-president of the OSCE Parliamentary Assembly, said.

The Georgian-US relations are not aimed against any third country, including Russia, the lawmaker stressed, adding that Tbilisi wants to have balanced neighborly ties with Moscow in such areas as economy and culture.

"Our bilateral relations are not against anybody. We have reiterated it many times. Russia is considering it as the anti-Russian move or the anti-Russian step, which is wrong. Nobody is trying to attack Russia," Tsereteli stated.

© Sputnik / Grigoriy Sisoev
Georgian Army to Replace Kalashnikov Machine Guns With US-Made M240
Tsereteli underlined that Pence’s trip was expected to be an opportunity for two countries to strengthen the existing strategic partnership in the security, economy and people-to-people contacts.

"This visit is very important for the region to take into consideration the strategic partnership between our country and the United States. For the last decade it has accelerated, we have a special charter of the strategic partnership in different directions: security, economy, people to people contacts, society and democracy, so it is developing and it is very important to establish more closer ties with the new administration for all those purposes," the lawmaker explained.

According to the politician, from the Georgian perspective, this trip could be used to establish a wider trade package with the United States, including holding talks on a free trade agreement.

"We would like to have a more established trade package and, possibly, free trade with the United States under the special agreement, which we have with Europe. It is very important and the Georgian government should work on this issue," Tsereteli stressed.

During consultations in Washington in May, Pence in a meeting with Kvirikashvili expressed the support of the United States for Georgia's aspirations to join the North Atlantic Treaty Organization (NATO), the sides also agreed to continue looking for additional ways to improve the two countries’ economic and trade partnership.

Georgia has been seeking NATO membership since the cooperation with the Alliance officially began in 1994 when the country became a member of the Partnership for Peace program. In April 2008, at the NATO Bucharest Summit, the allied heads of state and government agreed to Georgia becoming a NATO member in the future.

On February 7, Kremlin spokesman Dmitry Peskov said that Russia had a negative attitude toward the further expansion of NATO to the east.