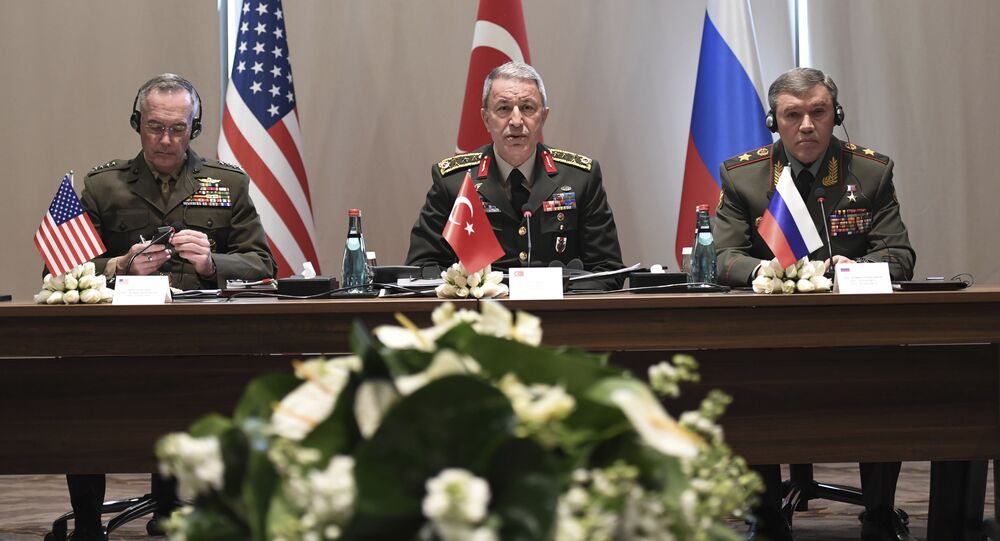 Russian, US Chiefs of Staff Ready to Restore Flight Safety Memorandum in Syria

The Russian chief of general staff and the US chairman of the joint chiefs of staff confirmed the sides' readiness to fully restore the memorandum on preventing incidents in Syria's airspace and discussed the establishment of four de-escalation zones in the country.

MOSCOW (Sputnik) — Russian Chief of General Staff Gen. Valery Gerasimov held phone talks with Gen. Joseph Dunford, Chairman of the US Joint Chiefs of Staff, on Saturday, discussing the situation in Syria and agreeing to maintain regular contact and to work on ways to prevent conflicting situations, the Russian Defense Ministry said in a statement.

After the US missile attack against Syria, the Russian Defense Ministry suspended a point-to-point communications link with the US military under the memorandum of understanding on de-confliction in the country.

"Readiness was confirmed to fully restore the parties’ compliance with their obligations in accordance with the Russian-American memorandum on ensuring security and preventing incidents in the Syrian airspace, as well as to continue work on additional measures to prevent conflict situations when conducting operations against Daesh [IS/ISIL/ISIS/Islamic State] and Jabhat al-Nusra [Jabhat Fatah al-Sham/al-Nusra Front]," the ministry said.

The US Joint Chiefs of Staff has confirmed the agreement between Dunford and Gerasimov to maintain contact on Syria.

"General Dunford and General Gerasimov talked about the recent Astana agreement and affirmed their commitment to de-conflicting operations in Syria. Both also agreed to maintain regular contact," US Joint Chiefs of Staff spokesman Capt. Greg Hicks said in a statement.

US and Russia will continue de-conflicting military operations in Syria, hours after new ceasefire effort goes into effect pic.twitter.com/On045EHmMb

The memorandum on de-escalation zones took effect on May 6. Any clashes between the government forces and opposition armed groups must stop within the zones.

Russia's deputy defense minister said on May 5 that the implementation of the memorandum on de-escalation zones would put an end to the civil war.

Why Flight Safety Memo Suspension Became Painful Experience for US