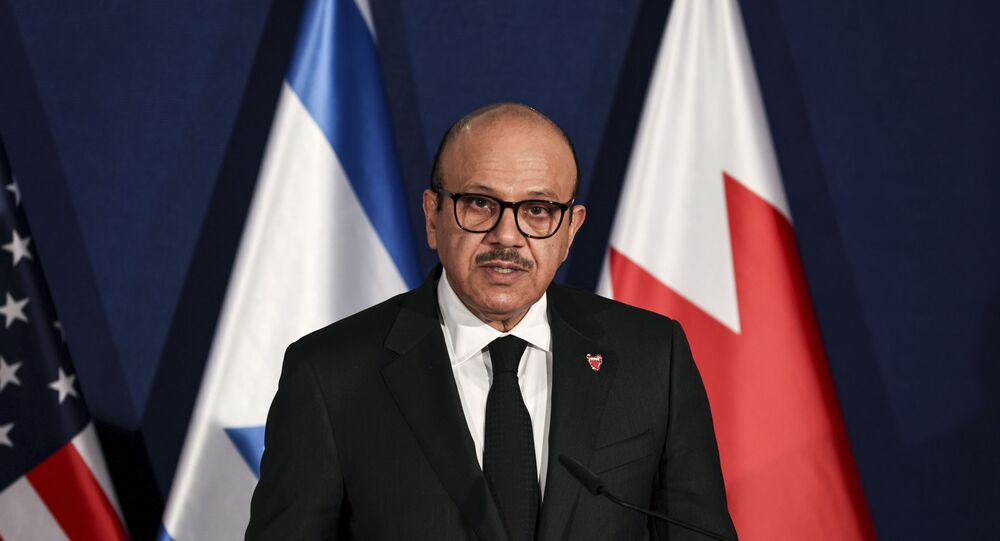 Following renewed hostilities in Gaza just days into the administration of Israeli Prime Minister Naftali Bennett, Bahrain’s foreign ministry has reached out to Jerusalem in order to find out more information about its commitment to the peace deal they signed in September.

Bahrain’s foreign minister, Abdullatif Al-Zayani,said on Wednesday that he’d reached out to the Israeli government to ask about “the Israeli policy towards the efforts aimed at establishing peace in the region through the settlement of the Palestinian [issue], on the basis of the two-state solution and the international resolutions,” according to Manama’s official BNA news agency.

Al-Zayani expressed his “keenness to communicate with its Israeli counterpart within the framework of the declaration supporting peace signed between the two countries, to push forward the peace process in the region in order to achieve security, stability and development for the benefit of its people,” the outlet said.

In September 2020, Bahrain joined the United Arab Emirates in signing a peace deal with Israel in which the two Arab states agreed the normalize relations with Israel in exchange for Israel delaying its planned extension of sovereignty over a large part of Area C of the West Bank, a territory with fertile farmland along the Jordan River Valley that is under complete Israeli military control. The deal was dubbed the Abraham Accords and later expanded to include Sudan and Morocco before the year was out.

However, the deal did nothing to halt Israeli bombardment of Gaza, which resumed almost before the ink was dry. While the accord signatories remained silent on the smaller-scale attacks, when the massive IDF bombing campaign began on May 10, 2021, they attracted no shortage of criticism from other Muslim states.

At a summit of the the Organization of Islamic Cooperation (OIC) during the 11-day war, Iranian Foreign Minister Mohammad Javad Zarif told the accord signatories present that “the massacre of Palestinian children today follows the purported normalization,” adding that “this criminal and genocidal regime has once again proven that friendly gestures only aggravate its atrocities.”

“Make no mistake: Israel only understands the language of resistance and the people of Palestine are fully entitled to their right to defend themselves,” he added.

In Bahrain, protesters gathered in Manama to protest the bombardment. However, the Bahraini government remained silent. According to The Guardian, a similar drama played out among all four Abraham Accord states.

However, the Israeli government that signed the Abraham Accords and that prosecuted not only the May 2021 war in Gaza, but also those in August 2014 and December 2008-January 2009, passed out of power last week.

Benjamin Netanyahu’s 12-year term as Israeli Prime Minister came to an end Sunday as a wide agglomeration of smaller parties united to form a coalition government with Naftali Bennett, chairman of the right-wing nationalist party Yamina, at the helm.

Bennett has pledged that his government, which for the first time in Israeli history includes an Arab party in the form of the conservative Ra’am joint list, will not rock the boat on international agreements and even said he wants to expand the Abraham Accords. The deal with Ra’am includes a pledge not to annex any of the West Bank. However, his own beliefs have left no question of what his ultimate political goals are.

In November 2016, when Donald Trump won election to the US presidency, Bennett boasted that his victory “is a tremendous opportunity for Israel to immediately announce its intention to renege on the idea of establishing Palestine in the heart of the country – a direct blow to our security and the justice of our cause … The era of the Palestinian state is over.”

During the 11-day war, Bennett tweeted a video in which he claimed that Gaza’s Al-Shifa Hospital is “where Hamas’ headquarter is located, while they are conducting terror actions against Israel.” The IDF said its bombs, which killed hundreds of civilians, were targeting alleged Hamas facilities. After a ceasefire was concluded on May 21, the IDF released a detailed list of the facilities it claimed to have destroyed, including launch sites for some of the 4,300 rockets fired into Israel during the war, which killed 13 people.

On Tuesday, after a pause of several weeks, the shooting resumed after Israeli police allowed a march of right-wing demonstrators to parade through Jerusalem neighborhoods celebrating the city’s capture in the 1967 Six-Day War, despite urges by Palestnian authorities not to permit the march to proceed. As incendiary balloons launched from Gaza set fire to grasslands in southern Israel, IDF airstrikes pummelled Gaza, continuing on Thursday for the third night in a row.