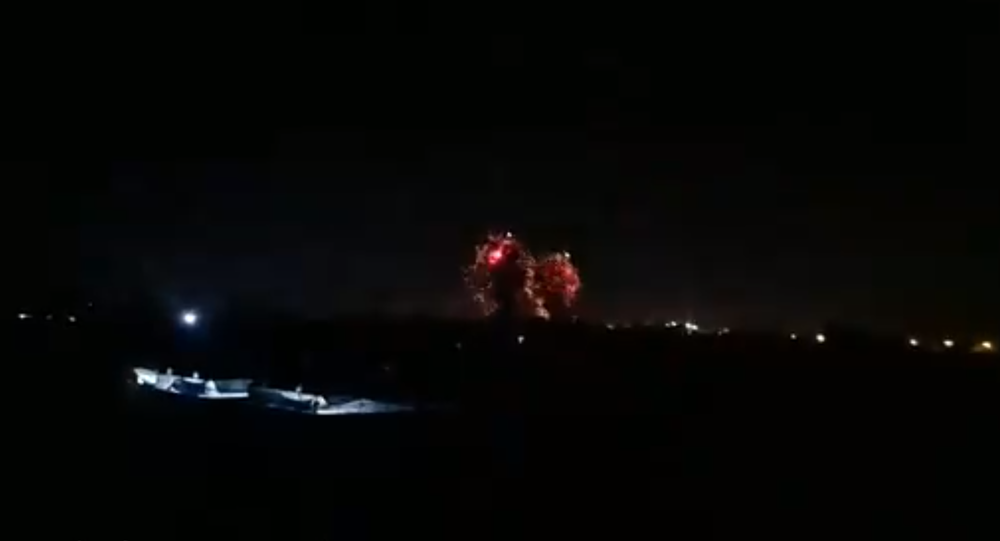 Israeli aircraft bombed targets in the Gaza Strip early Wednesday morning, less than a month after a ceasefire ended an 11-day Israeli bombing campaign against Hamas that killed hundreds and just hours after a march through Jerusalem by right-wing Israeli settler groups.

According to the Palestinian Shehab News Agency, the Israeli Defense Forces (IDF) also hit targets in the Yarmouk refugee camp in the area of Maan Bakhaniounis, and Quraysh, south of Gaza City. Video of the airstrikes on Yarmouk camp were posted on social media.

The IDF said in a statement posted to Twitter after the strikes that they had been in response to the launching of incendiary balloons into Israeli territory and that Hamas is responsible for Israel's airstrikes. They claimed that "terrorist activity" took place in the attacked compound.

The IDF has also released a thermal video of the airstrikes.

​Several fires on Monday in the Negev Desert in southern Israel were blamed on incendiary balloons allegedly launched from Gaza.

Hazem Qassem, a spokesperson for Hamas, told Shehab that the Israeli bombing was a "failed attempt" to stop their solidarity and resistance with Jerusalem and a cover for the "unprecedented state of confusion" after the Israeli government authorized a "Flag Day" march in Jerusalem.

The airstrikes come hours after right-wing Israeli groups marched through Palestinian neighborhoods in Jerusalem, celebrating the city's capture from Jordan in the 1967 Six-Day War. Jerusalem has been a site of intense struggle over the last few months as Palestinian families in the districts of Sheikh Jarrah and Silwan resist removal by Israeli authorities. Israeli police cleared the march's path, blasting Palestinian counter-protesters with water hoses and arresting 17 near the Damascus Gate, another site of protest in recent months. Israeli police said they were throwing stones and "disturbing the peace." Two Israeli officers were also wounded.

Palestinian Prime Minister Mohammad Shtayyeh called the march a "provocation of our people and an aggression against our Jerusalem and our holy sites," and Palestinian authorities in the West Bank called for a "Day of Rage" against the march.

Wednesday morning's airstrikes come less than a month after Israel reached a ceasefire with Hamas that ended 11 days of airstrikes and rocket attacks. More than 250 Palestinians were killed in Gaza by Israeli bombs and 13 Israelis were killed by Hamas rocket attacks, which were launched beginning on May 10 in response to violence against Palestinians in Jerusalem, including an incident in which Israeli police stormed Al-Aqsa Mosque, injuring hundreds.