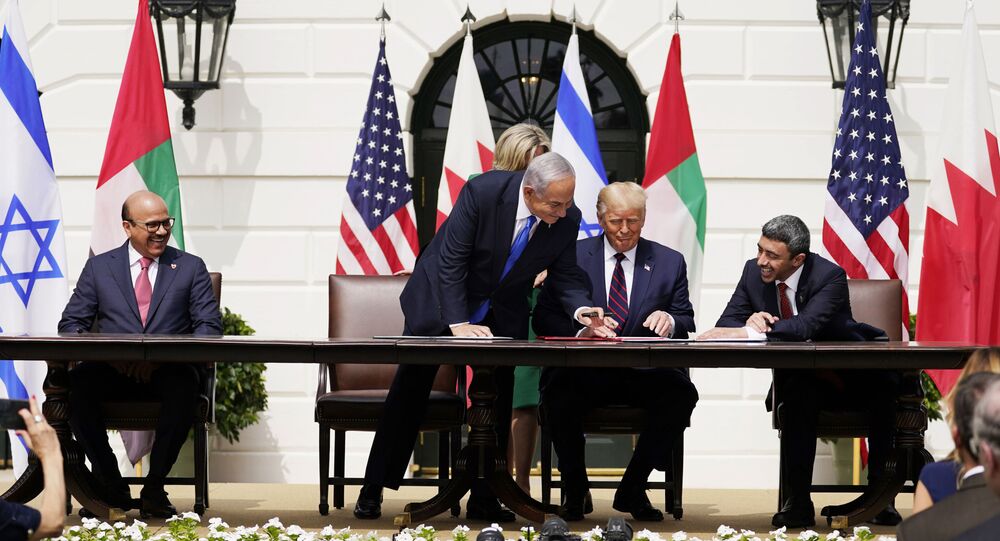 The recent Gaza conflict between Israel and Islamist militant group Hamas has prompted some mainstream media observers to wonder whether the ongoing violence would upend the Trump-brokered Abraham Accords between Tel Aviv and the Gulf States.

On 16 May, a league of Muslim nations gathered to discuss the unfolding crisis in the Gaza Strip, with Turkey and Iran pointing the finger of blame at the signatories to the Abraham Accords, Bahrain, Morocco, Sudan, and the United Arab Emirates (UAE) for striking the deal with Israel.

"There are a few who have lost their moral compass and voiced support for Israel", said Turkish Foreign Minister Mevlut Cavusoglu, addressing the meeting. "If there are half-hearted statements within our own family, how could we criticise others? Who will take our words seriously?"

Israel-Hamas Conflict Has Nothing to Do With Abraham Accords

Iran and Turkey's stance appears predictable given that they have lambasted the Abraham Accords and Muslim nations joining the US-brokered initiative from the start. At the same time, Ankara and Tehran allegedly provide assistance to the political wing of Hamas which they, in contrast to Israel, do not consider a terrorist organisation.

Still, Ankara and Tehran's criticism of Bahrain, Morocco, Sudan, and the UAE is totally unsubstantiated, argues retired Brig. General Dr Meir Elran, a senior research fellow and head of the Homeland Security Programme and a co-head of the Society-Military Programme at the Institute for National Security Studies (INSS).

The retired general also rubbishes media speculation that the ongoing Israeli-Hamas conflict may upend the accords with the Gulf States.

One of the major reasons for this wave of rocket fire by Hamas and Palestinian terrorists, is that they are seeking to undermine the Abraham Accords between #Israel and Arab - Gulf countries. They will not succeed. https://t.co/gNelAHvyn2

​Indeed, although last Sunday the Organisation of Islamic Cooperation (OIC) urged Israel to halt strikes on Gaza, most of the Abraham Accords signatories largely restrained themselves from criticising the Jewish state.

Furthermore, some Emirati clerics and social media users lashed out at Hamas for rocket attacks against Israel and using Palestinian civilians as human shields.

"Hamas launches rockets from within civilian neighbourhoods and when the response comes Hamas cries: 'Where are the Arabs? Where are the Muslims?' You have made Gaza a graveyard for innocent children. You did harm to Egypt and Sinai. You burned the flags of most Arab countries. You did not respect anyone. You did not show mercy to a child or an old man in Gaza", Dr Waseem Yousef, a Muslim cleric from the UAE, tweeted on 11 May.

​Besides this, the hashtags "#Palestine Is Not My Cause" and "#No to Terrorism" were circulated by Arab Twitter users in the UAE, Bahrain, and Kuwait over the weekend amid the Israeli-Gaza military standoff, according to The Guardian.

Speaking to US Secretary of State Antony Blinken on 17 May, Emirati Minister of Foreign Affairs Sheikh Abdullah bin Zayed specifically mentioned the Abraham Accords peace agreement, stressing that it holds "hopes for the region's peoples to live in peace and stability in a way that ensures sustainable development".

Kareem is from Gaza, I’m from Israel. Since recent escalations we’ve been speaking every day, asking how each other’s families are doing. Most Arabs and Jews want to live in peace, don’t believe otherwise. Hoping better days are near #ShabbatShalom pic.twitter.com/xDCg7oqbHJ

​Meanwhile, on 15 May, Globes, an Israeli financial newspaper, reported that the UAE had warned Hamas that it would withhold its planned infrastructure investments in the Gaza Strip unless the militant group maintains calm in its territory.

“If Hamas does not commit to complete calm, it is dooming the residents of the Strip to a life of suffering. Its leaders must understand that their policies are first and foremost hurting the people of Gaza”, an unnamed senior Emirati official told the newspaper.

Hamas is the joint enemy of both Israelis and Palestinians:

​Dr Elran does not rule out that if other signatories to the Abraham Accords step forward urging Hamas to de-escalate the conflict, it could possibly help bring an end to it.

"I definitely would appreciate any Arab initiative to stop the conflict and stop the Hamas rocket launching against Israel", the retired general says. "Right now, Qatar is a country that is trying to bring some kind of enragement, so far, unfortunately, with no success. And I think that if the other pragmatic, moderate Arab countries that have normal relations with Israel, like, for example, Jordan and Egypt, join in together in a joint effort to calm down the Hamas attacks on Israel and will facilitate any kind of a ceasefire, it will be appreciated and supported".

One needs to distinguish between Hamas' unilateral actions and the Palestinian issue in general, according to Dr Elran, who believes that the Islamist group has hijacked the protests and sidelined Fatah and Palestinian Authority President Mahmoud Abbas.

Back in 2007, Hamas forcefully ousted Fatah from the Gaza Strip and now it is apparently trying to gain a political advantage over Abbas after the latter postponed parliamentary and presidential elections in late April.

"This is basically the most fundamental reason why Hamas has opened fire against Israel", the retired general believes. "This has been a very, very unfortunate, I would even say, stupid decision on their part. Their people are hugely suffering from this initiative to disrupt relations between Israel and the Palestinian Authority (PA). And this is indeed unfortunate. And this is basically the primary cause for the present conflict when it was initiated one-sidedly by Hamas".

However, Hamas is unlikely to reap any political benefits from the unfolding crisis, according to the researcher. This conflict is bad for all sides, and it's mostly bad for the Palestinians and on top of this, for the people of the Gaza Strip, Dr Elran underscores.

"This also shows you how irresponsible the rulers of the Hamas movement are", he stresses. "And I think that they made a major mistake and that they are already sorry for that but they cannot find the courage and the way out of it. So that's why they are continuing the fighting. But basically, this was a major, very, very serious mistake on their part on the strategic level, for which they are paying very dearly presently, but mostly, unfortunately, it is bad for the Palestinian people in the Gaza Strip".