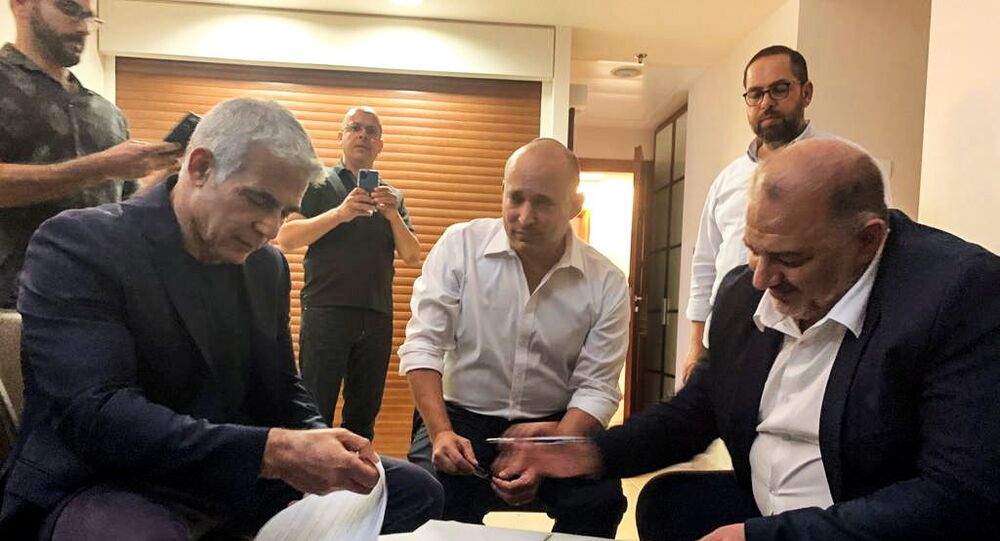 While parties across the Israeli political spectrum have united to end Benjamin Netanyahu’s 12-year reign as prime minister, many remain skeptical of how much the alliance can accomplish. Others fear that with right-wing nationalist Naftali Bennett at the helm, the moderate and left-wing groups will be unable to contain his more radical agenda.

According to the Times of Israel, the last to sign was Yamina, headed by Naftali Bennett, who is set to be the new prime minister after the swearing-in ceremony on Sunday. Earlier in the day, Lapid signed deals with Ra’am, Yisrael Beytenu, Labor, Blue and White, and New Hope, with Meretz coming to an agreement with Lapid on Thursday.

Under the terms of the deal, Bennett will serve as prime minister until August 2023, when Lapid will take over and lead until November 2025 - assuming the government survives that long, of course. In the last three years, Israel has had four elections, and the coalition is extremely diverse, including far-right nationalists, centrists, social democrats, and for the first time in Israeli history, an Islamist Arab party: the conservative Joint Arab List, or Ra’am.

While Bennett is head of government, Lapid will be deputy prime minister and foreign minister - offices Bennett will occupy when they rotate in 2023.

“The signing of these agreements brings to an end two and a half years of political crisis. We are faced with great challenges, and all the citizens of Israel are looking to us with hope,” Bennett was quoted as saying in a joint statement by Yesh Atid and Yamina. “The government will work for all the Israeli public - religious, secular, ultra-Orthodox, Arab - without exception, as one.”

Lapid said in the statement that the unity government was formed to do what’s best for the country. “All the partners in this government are committed, first and foremost, to the people of Israel,” he said.

The collective terms of the deal are exceedingly complex, with the eight parties each vying to protect their own core ideological concerns. However, the overarching concern is satisfying Yamina and Yesh Atid, who will exercise joint power over the structure of the coalition and both of whom will have veto power over decisions made in the cabinet and ministerial committees.

In addition to the prime ministership, Yamina will control the national service administration and the committee that appoints rabbinic judges, and party co-founder Ayelet Shaked will become Interior Minister.

New Hope has been given control over the Education and Justice ministries, with party chair Gideon Sa’ar taking the second portfolio, and they have been given a seat on the Judicial Appointments Committee. New Hope also asked for changes to the judicial system, including splitting the attorney general’s post into two posts, one for prosecution and another for government legal advice, and the passing of a basic law outlining the Knesset’s relationship with the Supreme Court.

Ra’am has won a nine-month freeze in home demolitions in the Negev, as well as a three-year freeze on a law that enables demolition of so-called “illegal construction” that is often used to destroy Palestinian homes. It has also won $16 billion in government funding to “reduce gaps in Arab, Druze, Circassian and Bedouin society” over the next few years, and formal recognition of three Bedouin communities within 45 days. Ra’am chair Mansour Abbas will head the Knesset’s Interior Committee, and the party will also head the Arab Affairs Committee.

Meretz, a social democratic party, will hold three cabinet seats: Health, Environment, and Regional Cooperation. The party has won a provision to “advance the gay community’s rights,” but as Haaretz notes, it will be hard to convince the more conservative members of the coalition to accept any change toward allowing same-gender marriage in Israel.

Labor has won six ministers or deputy ministers, including Transportation for party chair Merav Michaeli, Public Security, and Diaspora Affairs, as well as the committees on the constitution, law and justice, and labor, welfare, and health. The party has also been given a seat on the Judicial Appointments Committee.

Blue and White leader Benny Gantz will retain his Defense Ministry post. The status of the West Bank’s Area C, which is under full military jurisdiction, will remain unchanged. The government will also revisit the national conscription law to possibly include an alternate national service track, and it will establish a commission to investigate the Mount Meron disaster, in which 45 people were killed in a crowd crush on April 30 of this year.

The deal with Yisrael Beytenu will require the government adopt the 2016 Western Wall compromise, segregating male and female worshippers at the southern plaza, and half of the cabinet members on the committee will be women. They also won nonbinding support for authorizing city rabbis to conduct conversions, and have proposed an amendment depriving the interior minister of the ability to close businesses for Shabbat. Party chair Avigdor Liberman will control the Finance Ministry.