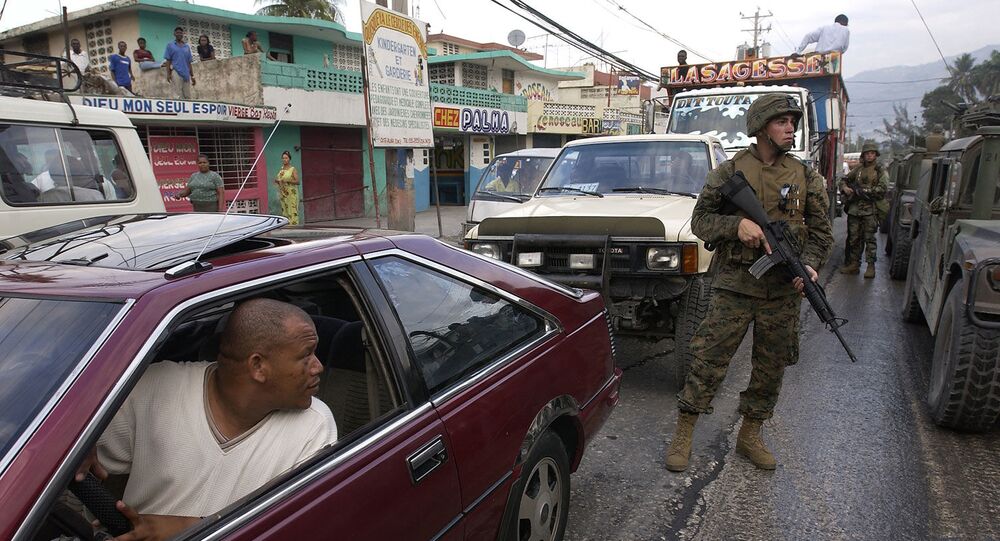 Just hours after the assassination of Haitian President Jovenel Moïse, the de facto Haitian government quietly requested troop deployments by the US and United Nations to defend the country's essential infrastructure. However, the primary reason the US has so far rejected the request is reportedly because it was "confusing."

"With regard to the circumstances [in] which we would send military troops to Haiti, we're only sending American Marines to our embassy to make sure they are secure and nothing is out of whack at all," US President Joe Biden said at a press conference in Washington, DC, with German Chancellor Angela Merkel on Thursday.

"But the idea of sending American forces into Haiti is not on the agenda at this moment," he added.

The government of acting Haitian Prime Minister Claude Joseph made its request for troops public on July 9, but according to Reuters, which viewed copies of two letters sent by the government to the US and UN, the request had first been made privately two days earlier.

Congressional sources told The Hill that the request was ambiguous about several things, including whether or not Joseph's government was requesting police or troops, due to the fact that "gendarmerie" can refer to either.

However, the US has already sent several officials from the FBI and US Department of Homeland Security to the Caribbean nation to help with the investigation of Moïse's murder, as well as $5 million in supplemental funding for the Haitian National Police (PNH).

A US troop deployment to Haiti is unpopular in both nations: since early this year, when the US backed Moïse's claim to have a presidential term one year longer than the supreme court had ruled, Haitians demonstrating in mass protests have demanded the US stop meddling in Haitian affairs. Earlier on Thursday, protesters outside the US State Department headquarters in Washington, DC, also demanded the US, as well as the Organization of American States Core Group and the United Nations, stop intervening in Haiti and to let Haitians sort out the issue themselves.

Moïse was slain early in the morning on July 7 by a team of gunmen who stormed his home in a Port-au-Prince suburb. His wife, Martine, was badly wounded but survived and is recovering in a hospital in Miami, Florida. According to the PNH, the squad included 26 Colombians, most of them ex-military, and two Americans; 20 of them have been arrested and the charged, while the rest were killed in gun battles with police.

On Thursday, PNH chief Leon Charles said that Dimitri Herard, the head of Moïse's security detail, had been removed from his post, interrogated, and placed in isolated detention. However, Charles dismissed claims the killing had been a government inside job as "a lie."

The US has repeatedly intervened in Haiti since it won its independence from France in 1804, including a 19-year military occupation from 1915 to 1934 under which 15,000 Haitians were killed, and more recently in 2004 when the US overthrew President Jean-Bertrand Aristide.