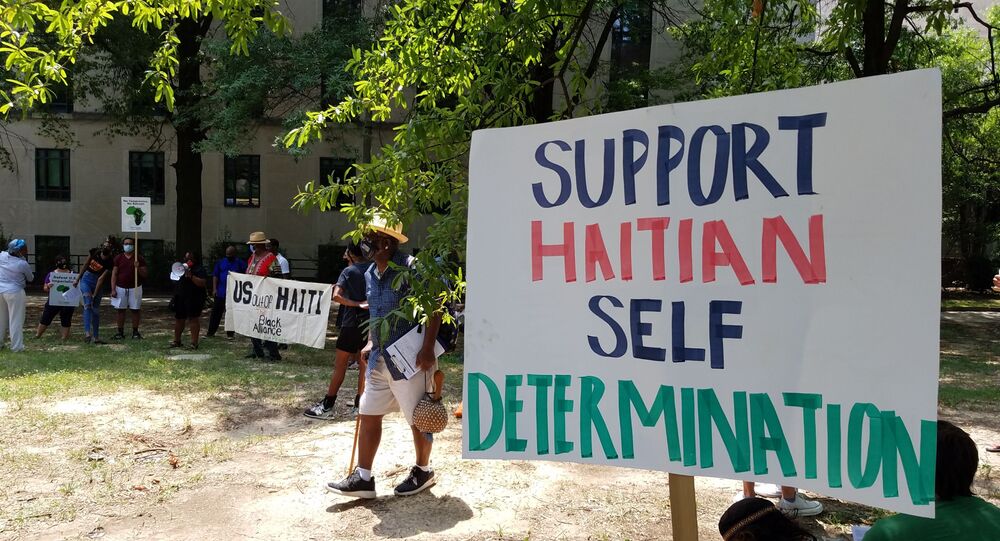 The last time a Haitian president was assassinated, in 1915, US Marines occupied Haiti for 19 years, looted the country’s gold reserve, and backed a military dictatorship that killed an estimated 15,000 Haitians - just one of numerous interventions in the Black Republic by the US to ensure its interests are protected.

Dozens of protesters demonstrated outside the US Department of State offices in Washington, DC, on Thursday against US involvement in Haitian affairs, including the question still being weighed by the Biden administration about whether or not to deploy troops to Haiti, as the government there has requested.

In the aftermath of the July 7 assassination of Haitian President Jovenel Moïse, who was allegedly slain in his home by a hit squad of 26 Colombian and two American gunmen, the acting government appealed to the United States and United Nations for help. While Washington has sent FBI and Department of Homeland Security officials to Port-au-Prince to evaluate how they can help, it has not yet decided whether it will deploy troops to the island nation, as it has done many times in the past - and often without the consent of the Haitians.

The protest was called by the Black Alliance for Peace, a black-led group which “seeks to recapture and redevelop the historic anti-war, anti-imperialist, and pro-peace positions of the radical black movement,” according to its website. However, several other protest groups were also present, including women-led peace group Code Pink and the Act Now to Stop War and End Racism (ANSWER) Coalition.

Erica Caines, a member of the coordinating committee of the Black Alliance for Peace and co-editor of the blog Hood Communist, told Sputnik that “regardless of the circumstances around the assassination, we do not want US intervention in Haiti.”

An example she gives of this continued meddling is how the UN decided Claude Joseph could supercede the Haitian constitution and stay acting PM.

"Haiti has never really had a chance to be self-determining post-revolution." pic.twitter.com/wsDQTAWGVI

​“We understand that the US, alongside the Core Group and OAS, and all pan-European powers, have consistently been in Haiti, so when talking about intervention, we have to understand that those powers have never left, they’ve always been there,” Caines said.

“They’ve been there before the assassination and they’re still there. And we know that most recently, the referendum for the constitution was pushed back, so we do understand that these are all major issues that are going to determine the livelihood of Haitians in Haiti and we’re here to say, unequivocally, that no US intervention and that the Haitian people are allowed and that they have the right to self-determine,” she added.

She pointed to the UN’s decision to recognize Claude Joseph, the former acting prime minister whose replacement was appointed just a day before Moïse’s assassination, as the country’s de facto leader as an example of this meddling.

“When we look at what the UN just did with the closed UN meeting that decided that the prime minister was just going to just extend [his term] and be the temporary leader of Haiti, you also have to remember who he is and his connection to NED, the National Endowment for Democracy,” a soft power front group for the CIA.

"The same enemies the Haitian people are fighting are the same enemies we have here ... we need to unite all the struggles ... because if the US working class struggle doesn't get stronger, we aren't going to be able to help the world." - Arturo from @ClaudiaJonesEdu pic.twitter.com/HX4nELH3PS

​Arturo Griffiths from the Claudia Jones School for Political Education in Washington, DC, said that the struggles of working-class people in Haiti and in the United States are directly connected, especially since there are so many Haitians working in DC, which is why his organization was protesting outside the State Department.

“The same enemy that the Haitian people are getting is the same enemy that we have here. No question about it… We need to unite all the struggles, to make sure that all the struggles come together. We can’t have separate struggles, we have to have togetherness, because the world needs the working-class struggle of the United States,” Griffiths told the crowd. “If the working-class struggle of the United States does not get stronger, we’re not going to be able to help the rest of the world. That’s the reality. We need the working class and the people to start getting together because the fight is not only here, but is international, too.”

The feeling is very strong that if the US sends troops as the de facto Haitian gov has requested, it will only make the situation worse, not better, and will only be done to secure US interests. pic.twitter.com/QJRSw6FNVO

​Indeed, just days after Moïse’s killing, protests erupted in nearby Cuba, where the US has been trying to overthrow the communist government since 1960. There are extremely strong indicators that the US helped orchestrate the demonstrations, which received extensive media attention in strong contrast to the mass demonstrations against Moïse’s government going on in Haiti for months before his death. Those protests, too, demanded the US not intervene in Haitian affairs.

In addition, the hit squad allegedly hired to kill Moïse was composed mostly of Colombian ex-military figures, many of whom were reportedly trained by the US via partnership programs, and the two Americans , according to media reports, were former US federal police informants. Venezuelan National Assembly Speaker Jorge Rodriguez also said that Miami-based CTU Security, the group contracted for the hit, was also responsible for the failed assassination attempt on Venezuelan President Nicolas Maduro in August 2018 using explosive drones, and was also connected to the failed 2020 plot to kidnap officially called Operation Gideon, but more colloquially known as the Bay of Piglets.