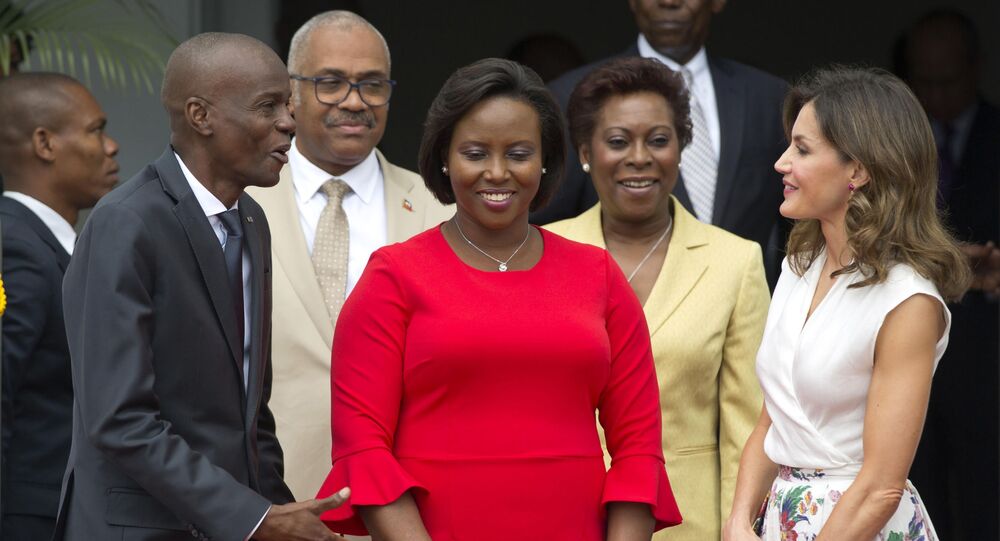 ‘I Was Able to Hold On’: Wife of Assassinated Haiti President Out of Danger - Photo

Haiti’s President Jovenel Moise was assassinated, supposedly by a group of 28 commandos — 26 Columbians and two American nationals, at his private residence in the capital city Port-au-Prince on 7 July. Haiti authorities have called on the US to appoint a peacekeeping force to control the fragile security situation.

Martine Moise, the wife of assassinated Haitian President Jovenel Moise, gave her first health status update on Thursday, saying that she was able to “hold on” after being wounded in an assassination attempt that claimed the life of her husband on 7 July at midnight in the island’s capital Port-au-Prince.

​The former first lady of Haiti, one of the poorest nations in the Americas, has been recovering at a hospital in Miami, Florida. She was flown there immediately after being wounded in the assassination plot.

Martine's update on her health status came days after she posted an audio message in her native Creole language, in which she described the moments leading up to the killing of the 53-year-old leader.

“In the blink of an eye, the mercenaries entered my home and riddled my husband with bullets. They didn’t even give him a chance to say anything”, she said in the audio, the translation of which has been reported by several media outlets.

She further alleged that her husband could have been shot dead by “mercenaries” because of his plans to hold a referendum by the end of the year.

Martines also pledged to not let the country “lose its way”. "We cannot let the blood of President Jovenel flow in vain”, she said in the recorded message.

Jovenel Moise's presidency, which began in 2017, was plagued by gang violence and popular protests, with many of his critics accusing him of trying to centralise power through constitutional changes.

He vowed to hold a constitutional referendum to “strengthen presidential powers” in September, and also delayed the presidential and legislative elections in the country, which his government said was due to the COVID crisis at the time. He had been governing by "decree" since the expiry of his term in office.

His assassination has led to a political slugfest for power, with two claimants to the presidential seat. Observers say that the difficulty in choosing Jovenel's successor have been compounded by the fact that the country has been without a Supreme Court judge and a legislative council, the latter being due to the ex-leader's decision to postpone the legislative elections in October 2019.