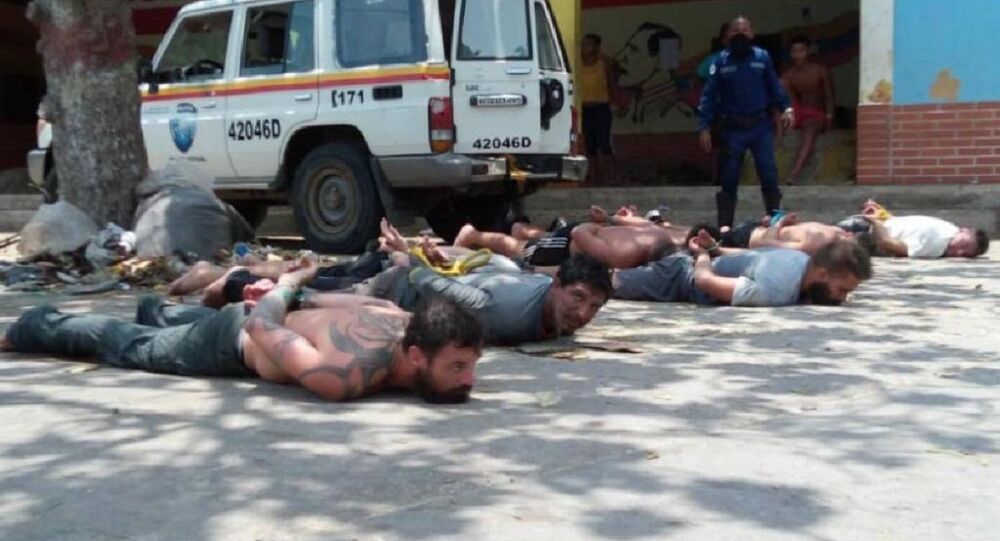 Although Washington has denied any involvement in the botched Venezuela raid it has nevertheless hurt its prestige and soft power, says Mark Sleboda, a US military veteran and international affairs and security analyst. The failed coup is over, and Venezuela will have a brief respite before Washington will try something like it again, he predicts.

The Bolivarian National Armed Forces (FANB) have arrested 40 suspects including eight paramilitaries led by the nephew of dissident Venezuelan major general Clíver Alcalá in the aftermath of the 3 May botched mercenary raid aimed at ousting President Nicolas Maduro.

​On Monday, two political advisers to self-proclaimed Venezuelan president Juan Guaido, Juan José Rendon and Sergio Vergara, resigned after admitting that they had struck an agreement for capturing Maduro with ex-Green Beret Jordan Goudreau, one of the masterminds behind the attempted coup. Meanwhile, three Democrats on the Senate Foreign Relations Committee requested answers from the Trump administration about the failed Venezuela raid citing potential violation of the VERDAD Act, signed into law on 20 December 2019.

Sputnik: Despite its failure Operation Gideon appeared to be preplanned and well equipped. Furthermore, US nationals involved in the operation – Jordan Goudreau, Airan Berry and Luke Denman – all served honorably in Iraq, Afghanistan and were assigned to the Crisis Response Force (CRF), 10th Special Forces Group, in the past. Do you think they acted on their own, akin to bounty hunters or were Trump officials aware of the plot?

Mark Sleboda: To the contrary, the Silvercorp USA operation, mockingly dubbed "the Bay of Piglets" on social media, appears to have been an absurdly planned and very poorly equipped fiasco, with promised financing from the would-be US proxy "President" for Venezuela Juan Guiado who signed a publicly revealed contract with Silvercorp for a coup attempt, never materialising.

​"Part of the seized weapons".

It is obvious that the Trump administration, as well as the US-aligned government of Colombia from where the incursion was launched, were both well aware of the plot and quietly cheerleading it on, though neither appear to have provided direct assistance to it.

In the immediate run-up to the incursion the US Secretary of State and former Director of the CIA, Mike Pompeo claimed that, his plans for "restoring democracy" to Venezuela were "gaining momentum" and former Trump neocon National Security Adviser John Bolton tweeted that "morning is coming to Venezuela". The point-man for contact between the clownish US mercenary group Silvercorp, the Juan Guaido crew, and the Trump administration was former Deputy Assistant, security chief and bodyguard to Trump, Keith Schiller.

Silvercorp appears to have previously provided security at Trump rally events in the US. After the bungling coup disastrously failed, Pompeo then specifically claimed that there was no "direct" US government involvement but that they were aware who provided the funding, as clear an admission of complicity from the US government as you are every going to get on their foreign meddling efforts. The Wall Street Journal has also reported that the CIA was at least aware of the incursion before it happened.

It is likely Silvercorp's founder Jordan Goodreau, received, or at least certainly believed he had received, a "green light" from the Trump administration to go ahead.

Sputnik: Could the botched raid cast a shadow on the Trump administration and play into the hands of the US president's opposition? How could Trump's antagonists weaponise the incident against him?

The Democratic Party also fully support the Trump administration's crippling sanctions and repeated regime change efforts against Venezuela, as US House Speaker Nancy Pelosi and the rest of the US Democratic Party rising to their feet and loudly clapping when Trump presented his puppet "President" John Guiado and discussing his efforts at the last US State of the Union speech clearly showed.

At most they might privately condemn it on the grounds that they would have carried out a much more effective coup attempt, but are unlikely in the extreme to challenge Trump on it in public. US client states in the EU have also recognized Guiado as the America-declared President of Venezuela. There will be no outrage or criticism from them either.

Sputnik: Why do US media claims that the failed invasion is a "propaganda win" for Nicolas Maduro? How could Maduro play this card now and what will happen to detained US mercenaries? What options does the US administration have to free them?

Mark Sleboda: The US media claims that it is a "propaganda win" for Venezuelan President Maduro in the sense that it is a clear propaganda loss for the US. The US government has consistently declared and openly carried out regime change efforts against Venezuela. Their complicity, at the very least, in this latest coup attempt fiasco is blatantly obvious.

​You can only have so many failed attempts before even the brainwashed US populace begins to wonder about US government and media propaganda about Venezuela and that, just maybe, the Venezuelan people support their President and government more than the US propaganda machine claims they do.

I imagine that the American mercenaries will languish in Venezuelan courts and prisons for a while and then later quietly be exchanged for some minor sanctions relief, probably after the 2020 elections.

Sputnik: Speaking to the Miami Herald on 5 May former Venezuelan National Guard captain and Gideon Op participant Javier Nieto stated that the operation would continue after a temporary halt. Is he just putting up a brave front or will the anti-Maduro military saga continue? How will the situation unfold in your opinion?

Mark Sleboda: I think that the insane pronouncements by Javier Nieto only shows how delusional and in denial of reality the pro-US Venezuelan "opposition" is. Part of the cause all along for this drawn-out string of coup and regime change failures against Venezuela is that the US proxies and the US ruling political elite both have long since started to believe their own propaganda about the actual level of support in Venezuela for their own socialist government and President Maduro. This creates a circular chain of propaganda informing bad policy and actions that of course then spectacularly fail. I think this particular fiasco is over and done. Venezuela will have a brief respite until the next one begins.