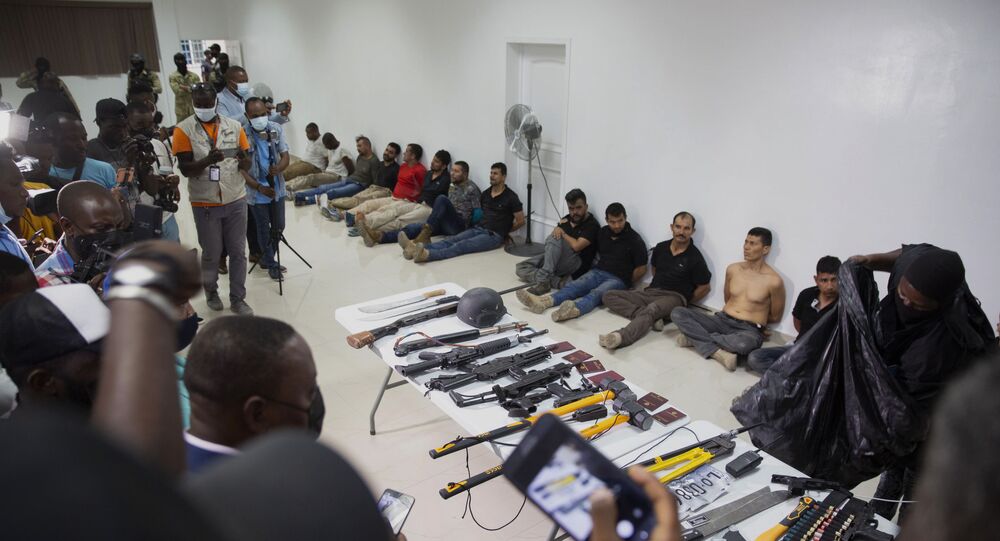 In the two-day manhunt after the assassination of Haitian President Jovenel Moïse, Haitian National Police (PNH) apprehended 19 suspects, including 17 Colombians and two Haitian-Americans. All of the men were found hiding out inside the capital city of Port-au-Prince and in places that raise more questions than they answer.

The PNH said Thursday that the hit squad, which killed Moïse and injured his wife, Martine, at their home in a Port-au-Prince suburb early Wednesday morning, had consisted of 28 “foreigners;” the other nine were killed in a shootout with police, all of them reported to be Colombian. They are still on the trail of the masterminds of the operation, with a two-week state of emergency declared on Wednesday giving them sweeping powers to search homes, blockade roads, and other sundry necessary measures to bring the perpetrators to justice.

However, the men were found in different groups and in strange locations.

The Embassy of the partially-recognized Republic of China (Taiwan) to Haiti reported Friday morning that 11 of the men had been apprehended inside the diplomatic compound in the suburb of Pétion-Ville, barely a mile from the Pelerin 5 neighborhood where Moïse’s house is located.

“In the early morning of July 8, security personnel at the embassy discovered a group of fully armed, suspicious-looking individuals breaking through the security perimeter and entering the courtyard. The security company immediately made emergency calls to notify embassy staff as well as the Haiti police,” Joanne Ou, a spokesperson for the embassy, said in a statement. She added that the facility had been closed due to the lockdown, so it was almost deserted.

“The Haiti police commenced an operation at around 4 pm on July 8, arresting 11 armed suspects. The operation went smoothly, and the suspects did not resist arrest,” Ou added.

Haiti is one of just a handful of nations that continue to recognize Taiwan - formally the Republic of China - as the legitimate government of China. The rest of the world’s nations instead recognize the People’s Republic of China, the government established in 1949 in Beijing after the communist Red Army was victorious in the civil war and captured all of the mainland. The US switched its recognition in the 1970s, but retains an open but informal relationship with Taipei, and pressures small nations like Haiti to continue to give Taiwan some diplomatic recognition.

Accordingly, Taipei has worked to court Port-au-Prince’s continued friendship, with Moïse and President Tsai Ing-Wen visiting each other’s nations in 2019 and Tsai pledging support for infrastructure projects in Haiti.

The two American mercenaries, James Solages, 35, and Joseph Vincent, 55, were arrested with several others at a house owned by Magalie Habitant, a major figure in Moïse’s Tet Kale party. She claimed that the house, located in Thomassin, about a mile from Moïse’s Pelerin home but in the opposite direction from the embassy, was not hers.

"I have nothing to do with this house that I left for three months,” Habitant told reporters. “I had hired it from a lawyer.”

#Haiti had a coup? It smells like it. The mercenaries that assassinated Jovenel Moïse were found in this woman's house. Her name is Magalie Habitant. She was a good friend of Moïse. In 2019, she assisted the 7 mercenaries that he hired to shoot protesters in the head. pic.twitter.com/tTN62ZNZSG

​Habitant was appointed by Moïse to head the Metropolitan Solid Waste Collection Service (SMCRS) in 2017, but was unceremoniously ejected from the position the following year when the bureau was rolled into a larger National Service for the Management of Solid Residues (SNGRS).

Two months ago, Habitant was accused of “mismanagement and misappropriation of public funds” while serving as SMCRS chief in an investigation by La Fondasyon Je Klere (FJKL), a Haitian civil watchdog group. The group described the agency under her tenure as having been run “like a private shop, in violation of elementary management rules, of the law on public accounting and the decree on the preparation of finance laws,” and tracked unexplained expenditures of 11,259,000 Haitian gourdes ($118,854), among various other unexplained expenses.

Habitant has been accused of having connections to other bands of mercenaries, as well. In February 2019, a Ford Ranger pickup truck in which seven heavily-armed mercenaries were arrested belonged to her, and she was subsequently indicted for suspected complicity in helping them to enter the country. The incident occurred amid the mass protests provoked by a Senate probe that had revealed embezzlement of the PetroCaribe program, by which Venezuela gave Haiti oil for its own use and to sell, allowing the impoverished country to pocket the profits as a valuable source of national income.

Then in March 2021, questions were again raised when she mysteriously served as the pickup driver for three hostages released by another group of mercenaries. She told Port-au-Prince radio station Magik9 that a “concerned body” had asked her to pick the men up, saying it was “of the utmost importance to the country.”

The presence of mercenaries and armed gangs was a staple of Moïse’s presidency, and they have been employed both against protesters and ransacked communities of their own volition, killing, kidnapping and displacing thousands of residents in fights over territory with rival gangs.

How The Commando Arrived

At a news conference in Bogota, Colombia, on Friday, National Police director Gen. Jorge Luis Vargas Valencia revealed that the “recruitment, the gathering of these people'' in the commando had been carried out by four different companies and trickled into Haiti in the days and weeks prior to the hit.

None of the Colombians’ names have been revealed thus far, but Vargas said that two of the suspects had traveled to Haiti via Panama and the Dominican Republic, the latter of which shares the island of Hispaniola with Haiti; a second group of 11 men arrived in Haiti on July 4, also via DR.

Further, 13 of the 15 Colombians captured or killed by Haitian police had been identified as retired members of the Colombian military, ranging from the rank of lieutenant colonel to soldier, and had left the military within the last three years, according to the commander of Colombia's Armed Forces, Gen. Luis Fernando Navarro.

Often heavily trained by partnership programs with the United States, Colombian soldiers are popular hires for private security firms and mercenary outfits. It is notable that video of the commando assembling outside Moïse’s home just before his death shows the men identifying themselves to Moïse’s guards as agents of the US Drug Enforcement Agency (DEA), a federal law enforcement agency that partners with the Colombian government to run counter-narcotics operations in the country. A highly militarized police force, the DEA also works with US Special Forces to train Colombia’s militarized police.

Edmond Boccit, Haiti’s ambassador to the US, dismissed the notion they could be DEA agents, telling Sputnik “they just wanted to mask the horrible act.”

The two Americans, Solages and Vincent, had been in Haiti for some time.

​According to the Associated Press, Solages previously worked as a bodyguard at the Canadian Embassy in Haiti while in the employ of a private contractor, and describes himself as a “certified diplomatic agent.” He lives in Fort Lauderdale, Florida.

Magistrate Clement Noel told Port-au-Prince daily La Nouvelliste that Solages had said he found the job with the commando “on the internet” and had been living in Haiti for a month. Noel said Vincent had been in Haiti for six months, but previously lived in the Miami area.

The two men claimed to be nothing but translators for the commando, and told police that the mission was to arrest Moïse “within the framework of the execution of a mandate of an investigating judge and not to kill him," Noel told the paper.

Grappling With the Aftermath

After Moïse’s death, his wife, Martine, who was badly wounded in the attack, was transported to Florida for treatment and was last reported to be in stable condition at a Miami hospital.

In the power vacuum, acting Prime Minister Claude Joseph declared himself the country’s interim ruler and has been supported by the US, UN, and other international bodies. However, the day before his assassination, Moïse had appointed another man, neurosurgeon Ariel Henry, to succeed Joseph, but according to Boccit, Henry had no chance to organize a government by the time of the crisis. Friday evening, a third contender also emerged: Senate President Joseph Lambert, appointed by the rump Senate composed of just 10 lawmakers.

Joseph has declared a two-week state of emergency and given police wide-ranging powers to hunt down the president’s assassins. On Friday afternoon, Elections Minister Mathias Pierre said Joseph’s government had asked the US to deploy as many as 500 troops to Haiti to protect the country’s essential infrastructure, such as ports and gas facilities, from “urban terrorists” and “potential mercenaries.” However, on Friday evening, Reuters reported that a senior US official had said the country had declined to send troops for the moment.

The US is also sending agents from the FBI and Department of Homeland Security to the country to buttress the PNH, along with $5 million toward the PNH budget, the White House has revealed.