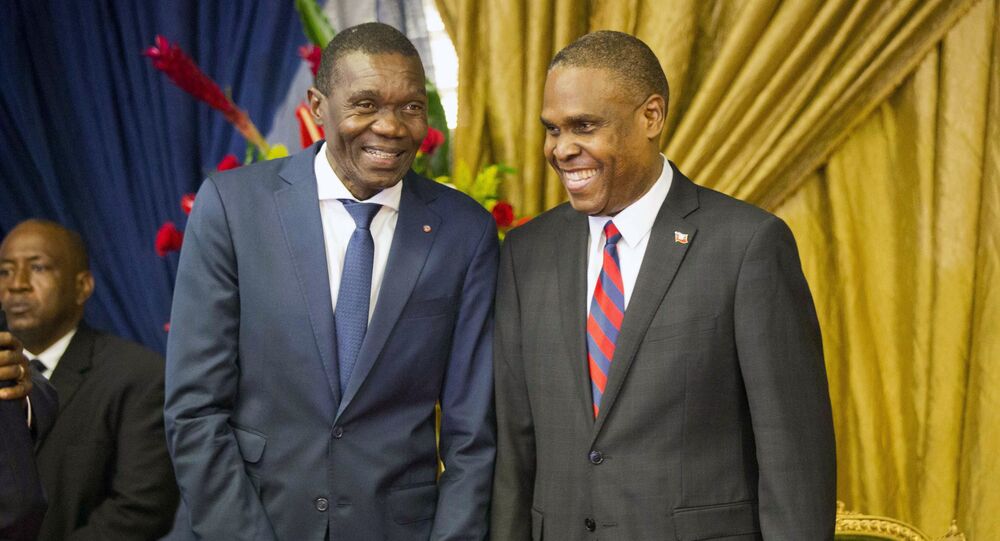 Haiti's Senate, the only remaining body of elected officials in the country's government, voted on Friday to elect Senate President Joseph Lambert as the country's interim leader - a direct challenge to acting Prime Minister Claude Joseph, who has declared himself the leader and has the backing of the United States and United Nations.

“Joseph Lambert, elected by the people as Senator of the Republic, is chosen by his peers to fulfill the function of Provisional President of the Republic of Haiti until the entry into office of Parliament, the second Monday in January 2022, until a new president is elected on February 7, 2022," the senators declared.

They tasked him with creating a "government of national agreement" and a provisional electoral council within 15 days, in pursuit of the "restoration of security and the holding of credible elections in the shortest reasonable time."

According to Haitian news outlet Juno7, eight senators voted for the measure and two abstained. The Senate has 20 empty seats at present due to a series of interrupted elections that resulted in two cadres of senators being elected - and thus also departing - at once, with former Haitian President Jovenel Moïse failing to organize elections to replace them in January 2020.

The parliament's lower house, the Chamber of Deputies, similarly saw its lawmakers' terms expire in January without any new replacements, leaving just Moïse and a handful of senators as the only elected officials in the national government.

Lambert's claim to power means there are now three contenders for supreme power in the Caribbean nation in the aftermath of the assassination of Moïse on Wednesday by a commando of 28 gunmen.

© REUTERS / Estailove St-Val
Haiti's interim Prime Minister Claude Joseph addresses the audience after suspects in the assassination of President Jovenel Moise, who was shot dead early Wednesday at his home, were shown to the media, in Port-au-Prince, Haiti July 8, 2021.

Claude Joseph was appointed by Moïse in April to be the country's acting Prime Minister due to the country's nonexistent parliament being unable to form one after Joseph Jouthe resigned. He was previously the country's Foreign Minister. However, on July 6, just a day before Moise was killed, he appointed Ariel Henry to succeed Joseph in the role. A neurosurgeon who served as Minister of Interior, Labor, and Social Affairs during the administration of Moise's predecessor, Michel Martelly, Joseph led the response to the country's cholera outbreak in 2010, which was caused by United Nations troops sent after the catastrophic earthquake in January of that year.

Many claim that Joseph's declaration assuming power is unconstitutional, but he has the backing of the US and UN, who have said they prize stability above all else. Edmond Bocchit, Haiti's ambassador to the US, told France 24 on Thursday that Henry had not had time to form a new government by the time Moise was killed, which is why Joseph has remained in power.

"Claude Joseph is not Prime Minister, he is part of my government," Henry said on Friday, according to La Nouvelliste.

Helen La Lime, the United Nations' special envoy for Haiti, said on Thursday that Joseph would lead the country until new elections had been organized, which are planned for September and November.

Wikimedia Commons
Ariel Henry, who was appointed by Haitian President Jovenel Moise to be prime minister the day before Moise's assassination

Meanwhile, Claude Joseph's government has requested the United States and United Nations dispatch troops to Haiti to defend key infrastructure from mercenaries. However, according to Reuters, Washington has declined the request.

“We definitely need assistance and we’ve asked our international partners for help,” Joseph told the Associated Press. “We believe our partners can assist the national police in resolving the situation.”

The US has also sent FBI and Department of Homeland Security officials to the country to assist the National Police (PNH), and provided $5 million towards the PNH's budget.

After Moise was killed, Joseph declared a "state of siege" and gave the police new powers to hunt down the president's killers. As of Friday evening, the PNH had reported the arrests of 19 members of the commando, 17 of whom were Colombians and 2 of whom were Americans of Haitian descent. However, they said at least seven others had been killed and even more remained at large.