Ukrainians are heading to the polls on Sunday for the first round of the country's presidential election, the first presidential race since the controversial May 2014 vote which followed the Maidan coup. Sputnik brings you up to speed with everything you need to know about the top three candidates running for the country's highest office.

On paper, the presidential field is an incredibly crowded one, with nearly 40 officially-registered candidates representing either themselves or various Ukrainian political parties. Since the candidates first started getting registered in early January, five other would-be candidates have withdrawn from the race in favour of others.

Several dozen more potential candidates, including several veteran politicians advocating a neutral, non-aligned Ukraine and a business-like relationship with Russia, were denied registration. They includes former veteran lawmaker Vladimir Oleinik and Petro Symonenko, leader of the Communist Party of Ukraine, whose party was prohibited from participating in the election under the country's decommunisation laws.

© Sputnik / Stringer
LIVE UPDATES: Ukraine Holds Presidential Election
The election is also complicated by the ongoing conflict in eastern Ukraine, with wide swathes of the Donetsk and Lugansk regions, containing up to 3.7 million people, refusing to participate in the election.

Despite these nuances, observers say only three candidates – including the current president, a long-time veteran of Ukrainian politics, and a comic upstart-turned protest candidate, have any real chance of victory under Ukraine's voting system, which requires the top two candidates from the first round of voting to face off for a second round.

Well-known showman, comic, actor and art director for the television production company Kvartal 95, Volodymyr Zelensky, became the unexpected wild card in the 2019 presidential race. The comic, who is running on a populist, anti-oligarch, anti-corruption, anti-Poroshenko platform, is polling at over 26 percent of the vote, according to Ukraine's RATING agency, (or up to 32 percent, according to Kiev International Institute of Sociology polling), virtually guaranteeing him a place in the second round.

© Sputnik / Stringer
Things to Know About Ukraine Election Frontrunner, Comic Volodymyr Zelenskiy Who Played President on TV
A textbook protest candidate, the 41-year-old has zero political experience, but has made up for it in the minds of many Ukrainians with his personal charm and charisma, as well as his promises to shake up the political status quo. Formally announcing his candidacy on New Year's Eve, Zelensky recorded an address which was broadcast in place of President Poroshenko's traditional New Year's speech on Ukraine's Channel 1+1, owned by oligarch and veteran Poroshenko adversary Ihor Kolomoyskyi.

Among his promises is a vow to 'lock up' the current president, a willingness to talk with world leaders, including Vladimir Putin and the Donald Trump; promises to negotiate peace in the civil war in Donbass, opposition to the ban on Russian artists, and a proposal to ban oligarchs from "having their own deputies in parliament". 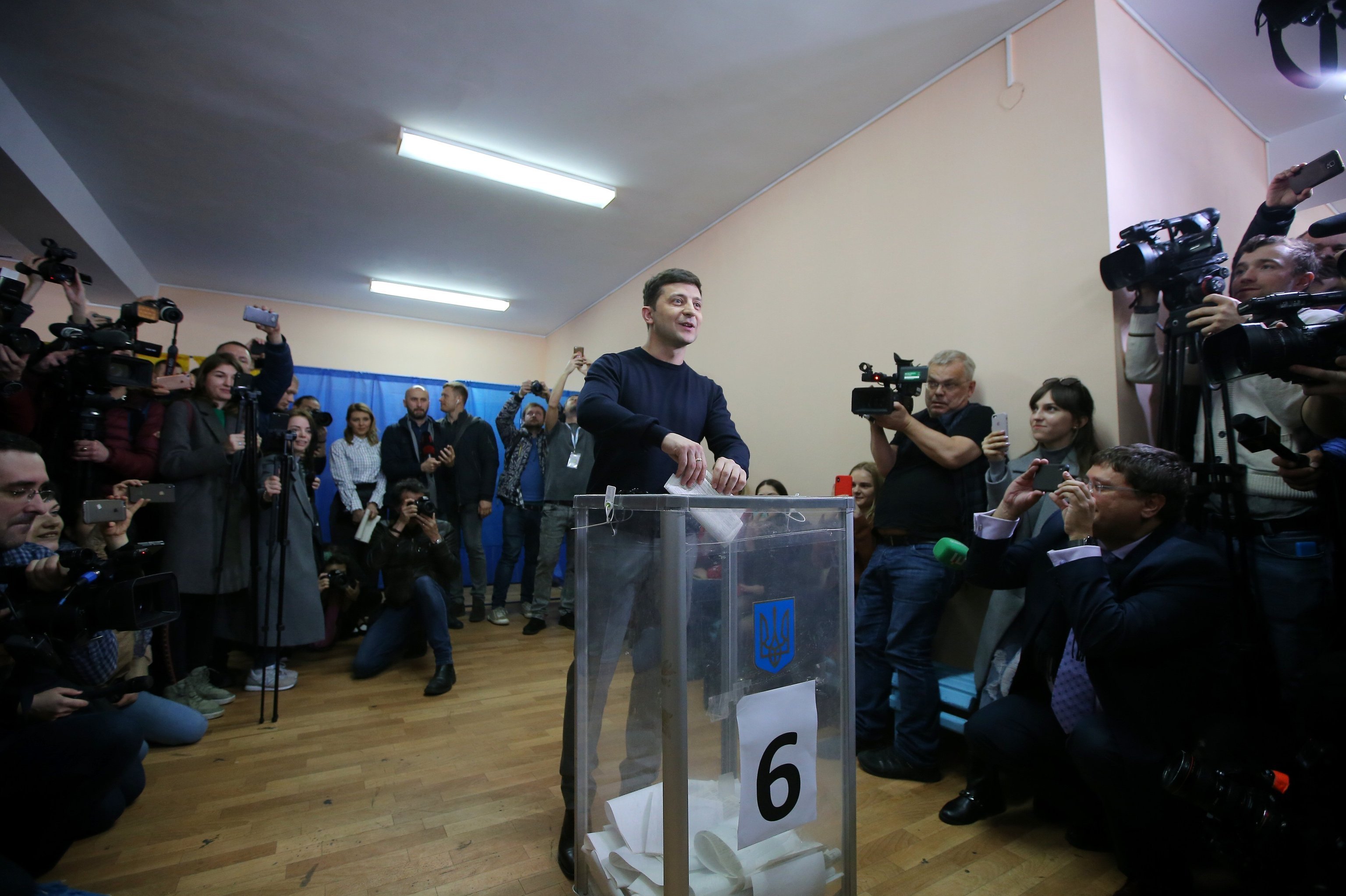 Late last year, Zelensky told Ukrainian interviewer Dmitry Gordon the following regarding NATO and EU membership: "I never go to someone else's house if I'm not called. And we have not been called yet. Why do we need to put this in the constitution, if it is possible to come to an agreement on the sly? Or agree with a dozen different countries on military partnership, and get help in this way."

© REUTERS / Kim Kyung-Hoon
IMF to Allocate First Tranche of $3.9Bln Loan Package for Ukraine
In the same interview, Zelensky said that Ukraine's national idea should be that of an "awesome, liberal, very free country…And the best way to protect yourself, an alternative to military blocs, is for the big foreign investors to come to us. Who will conquer us if representatives of the Arab world, China and the US are here?"

Zelensky's candidacy has sparked concerns among Western observers, with his apparent waffling on NATO of particular concern to the Philadelphia-based Foreign Policy Research Institute, which has voiced fears about his "lack of commitment in pursuing European integration." At the same time, the think tank notes that Zelensky may at least share a "willingness to listen to expert advice," citing his recent meeting with former pro-Poroshenko economic officials to discuss the importance of the liberal economic policy supported by the International Monetary Fund. In that sense, the implications of a Zelensky victory would depend on his ability or desire to challenge the status quo of the pro-Western establishment in Kiev.

Incumbent President Petro Poroshenko faces an uphill battle in his quest for a second term. Economic malaise, a massive outflow of Ukrainians abroad (with some 4.6 million working-age people, or 25 percent of the country's economically active population, believed to have left the country in search of work, according to Ukraine's Statistical Agency), the ongoing conflict in the Donbass and multiple corruption scandals prompted Poroshenko's ratings to dip into the single digits in 2018. Currently, Poroshenko is polling at 17.2 percent support among would-be voters, according to RATING. This result would place Poroshenko in the running for second round of voting, if he can secure victory over veteran politician Yulia Tymoshenko.

© Sputnik / Стрингер
President Poroshenko and his family voting in the presidential election.
© Sputnik / Andrey Stenin
Ukrainians Feel Deceived, Disappointed by 'Maidan Revolution' - US Scholar
A veteran official who served as one of Viktor Yushchenko's closest allies following the so-called Orange Revolution in 2004, Poroshenko has served as foreign minister in Tymoshenko's government, and was appointed by President Viktor Yanukovych as minister of economic development and trade. Poroshenko went on to support the US and EU-backed Maidan coup d'état against Yanukovych in early 2014, and handily won elections in May of that year. Poroshenko and his parliamentary party, the aptly named Petro Poroshenko Bloc, support Ukraine's entry into the EU and NATO, and have pushed to destroy the traditionally strong economic, cultural, political and other links with Russia during his four and a half-years in office.

Poroshenko is one of the wealthiest people in Ukraine, with his fortune, including holdings in everything from the Roshen confectionery company to the TV news broadcaster Channel 5, to car, bus and military factories and a shipyard, reached $1.1 billion in 2018, increasing some 10 percent since 2017, making him the sixth richest Ukrainian national. Poroshenko reportedly transferred his shares in Roshen to the Rothschild Trust foundation in 2016.

According to RATING, Poroshenko is running neck and neck for second place with Yulia Tymoshenko, leader of the Fatherland (Batkivshchyna) party, with the veteran politician also polling at 17.2 percent of the vote. A key political figure during the 2004 Orange Revolution, Tymoshenko lost to Yanukovych in the second round of voting in the 2010 presidential elections.

© Sputnik / Стрингер
Yulia Tymoshenko outside the polling place after voting in the 2019 presidential election.
© AFP 2019 / PATRIK STOLLARZ
Ukrainian Presidential Hopeful Starts Impeachment Process Against Poroshenko
Her party, with its centre-right, pro-EU, pro-NATO agenda, has consistently been a major force in Ukraine's politics. Holding 20 of 450 seats in the current parliament, the so-called Yulia Tymoshenko Bloc, with Fatherland at its core, won 129 seats in the 2006 parliamentary elections and 156 seats in the 2007 snap vote, allowing it to form a coalition government with Tymoshenko as prime minister. The bloc disintegrated in 2010, but Fatherland returned to a coalition with the pro-Maidan forces in 2014, withdrawing from that coalition and returning to the opposition in 2016.

Tymoshenko was convicted of embezzlement and abuse of power in 2011 for alleged illegal activity involving a natural gas import contract with Russia during her term as prime minister between 2007 and 2010. She was released from a hospital in Kharkiv and rehabilitated in 2014, immediately after the Maidan coup, having served just three years of a seven year sentence, and only one of them in an actual jail. Tymoshenko lost to Poroshenko in the 2014 presidential election, taking some 12.81 percent of the vote compared to Poroshenko's 55 percent.