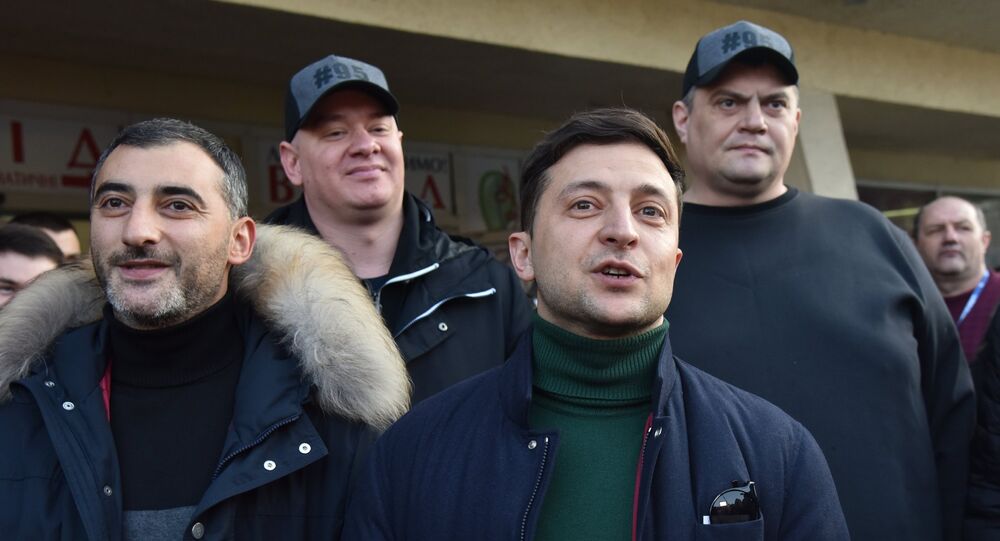 MOSCOW (Sputnik) - Ukrainians will go to the polls on Sunday to elect a new president, with the runoff slated for 21 April in the event if none of the candidates secures over 50 percent of the vote.

As most experts predict that the second round is inevitable, the main intrigue is who are the two who will become front-runners.

As many as 39 candidates are competing for the highest office, which is a record number in the country’s history, yet the main struggle is expected to unfold between three candidates — comedian Volodymyr Zelenskiy; incumbent President Petro Poroshenko; as well as a former prime minister and the leader of the Batkivshchyna (Fatherland) party, Yulia Tymoshenko.

© Sputnik / Andrey Stenin
Ukrainians Feel Deceived, Disappointed by 'Maidan Revolution' - US Scholar
Zelenskiy, who has no political experience, is regarded as a protest vote candidate. He presents himself as the one who will challenge seasoned politicians in the current race amid growing public demand for change.

Poroshenko, who runs as an independent candidate, portrays himself as the only candidate capable to "resist" Russia and lead Ukraine on its path toward EU and NATO membership. Tymoshenko, who is running for Ukrainian presidency for the third time, places an emphasis on corruption fight and pledges to halve gas prices for the population.

The outcome of the vote, meanwhile, will be mainly determined by estimated 25-30 percent of Ukrainians, who have still been undecided whom to support.

Like in the previous election, the Ukrainian Central Election Commission (CEC) will not open polling stations in the self-proclaimed republics of Donetsk and Luhansk. According to the election body, voting rights of the local residents — that is between 7 and 10 million people — are not restricted, and they will be able to cast their ballots on the Kiev-controlled territory.

© Sputnik / Alexey Filippov
OSCE Urges Ukraine to Abstain From Detaining Foreign Journalists
Aside from the millions of residents of war-torn Donbass, the approximately 3 million Ukrainians who reside in Russia will be also effectively unable to vote since CEC has closed all polling places in the neighboring country.

In addition, for the first time, Russian observers have been barred from monitoring electoral process as the Ukrainian parliament passed a relevant law in February. Kiev also refused to allow Russians in as part of missions of international organizations. The move has been met with a condemnation by the Organization for Security and Co-operation in Europe (OSCE), while Moscow has stated that the step raises questions around the legitimacy of the whole electoral process and the potential recognition of its results.

It Is Not the People Who Vote That Count?

A week before the election, a poll by the Kiev International Institute of Sociology projected that Zelenskiy would receive 32 percent of votes. In the survey, the comedian was followed by Poroshenko and Tymoshenko with 17 and 12.5 percent respectively. The leader of the Opposition Platform — For Life party, Yuriy Boyko, was expected to come in third with some 10 percent.

In comments to Sputnik, experts, however, disagreed in their predictions.

According to Dr. Nicolai Petro, a professor of comparative and international politics at the University of Rhode Island, Poroshenko and Zelenskiy are "destined to compete in a second round" if the majority of polls are to be believed.

"Zelensky should then win the second round handily because, according to the same polls, 51 percent of Ukrainians say they will not vote for Poroshenko under any circumstances. Mathematically, it would therefore seem impossible for him to win", Petro told Sputnik.

The expert, however, stressed that when Ukrainians are asked who they think will actually become president, most Ukrainians paradoxically name incumbent Poroshenko.

"Presumably they agree with the popular saying that it is less important how people vote, than how the votes are counted", he said.

© Sputnik / Mikhail Palinchak
Saakashvili Claims Poroshenko Planned to Swap Crimea for NATO Membership
Jaromir Kohlicek, a member of the EU Parliament’s Delegation to the EU-Ukraine Parliamentary Association Committee, in contrast, believes that it will be Tymoshenko and Zelenskiy who will win the first round.

"[The] chance of P. Poroshenko to retain presidential post is negligible (but not zero)", Kohlicek, who is also a member of the Communist Party of the Czech Republic’s Bohemia and Moravia, told Sputnik.

The head of the Center for Civil Society Studies, Vitaliy Kulik, meanwhile, believes that it is Poroshenko and Tymoshenko who will compete in the runoff.

"Sociological research is one thing, but reality is the other. I have doubts that Zelenskiy's rating, 24 percent and higher, will be converted into votes. Now the main intrigue unfolds between Tymoshenko and Poroshenko. It is between these two campaigns that the main battle will unfold in the regions", Kulik said.

Ukrainian political expert, Taras Berezovets, shares the same opinion. According to Berezovets, it has already become evident that it is impossible to turn Zelenskiy into another Ronald Reagan, the Hollywood actor-turned-president, not only due to zero political experience but also the lack of powerful party support.

No Shifts in Ukraine Politics Expected

When asked about possible shifts in Ukrainian politics in case Poroshenko is not re-elected, Dr. Petro doubted that one should anticipate such an outcome, adding, however, that much would depend on what political powers would rise during the October parliamentary elections.

As for Ukrainian-Russian relations, he reiterated that if "a less radical parliament emerges in the fall, it will give the presidency, and the judiciary, greater freedom to pursue a less nationalistic course," which might potentially improve the bilateral ties.

"I see no policy changes whatsoever coming through the end of this year", he said.

Cyrille Bret, a researcher at Sciences Po university in Paris, believes that Ukraine will have to tackle the same challenges as before, regardless of who wins the election.

"No matter the result the challenges for Ukraine remain the same: socioeconomic crisis is difficult to bear for Ukrainian society. So the next executive power will have to respond to the expectations", Bret told Sputnik.

The scholar added that Kiev could hardly shift closer to Brussels without working on its relationship with Russia.

© Photo : OSCE / Curtis Budden
OSCE Urges Kiev to Contribute to Democracy, Allow Russia to Observe Ukrainian Presidential Election
"The paradox is that what Ukraine wants today [is] to stick with Europe but cannot resolve its challenges without negotiating with Russia", Bret said.

Kohlicek, in turn, expressed belief that the change in the Ukrainian political landscape is "highly probable" as the chance of Poroshenko to retain presidential post is "negligible". He, however, reiterated that the incumbent president’s victory was still possible, noting that "no essential changes can be awaited" in this case.

"Whenever new president starts to follow Minsk agreements, the solution of actual problems will start to approach. To the contrary I don´t feel the new president will assure big changes in internal situation if he will not start to reorganize economic and security forces in Ukraine", the expert added.

Gianmarco Senna, a member of Italy’s Lega party and the president of the commission for the production activities of Lombardy region, meanwhile, noted that "when there are elections taking place in any part of the world, even more so in Ukraine, immediately there are talks that Russia influences elections".

Having slammed claims about Russian "meddling". Senna stressed that what really matters is that "the one whom people choose [in Ukraine] then follows his own democratic line".