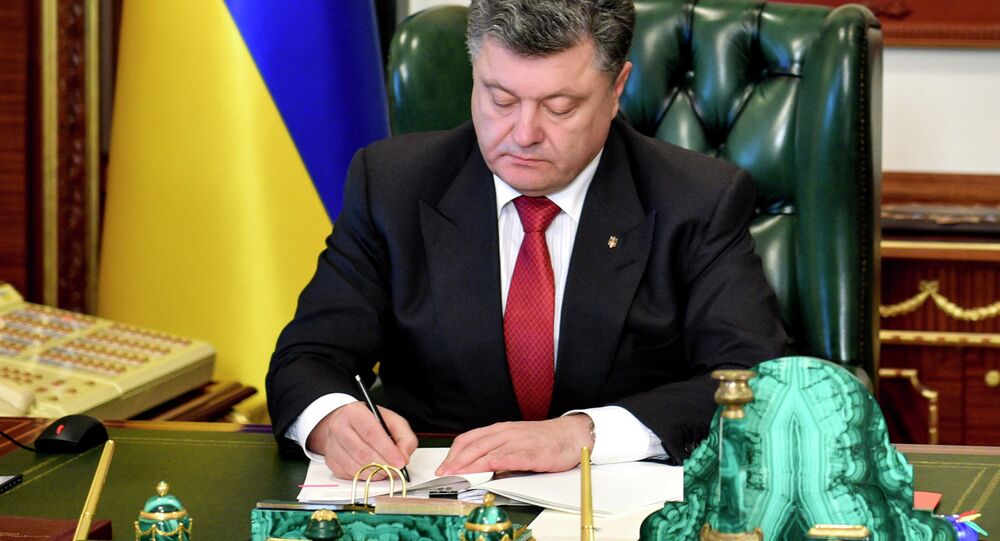 Kiev sent a diplomatic note to Moscow in September saying it would not renew the 1997 treaty.

Ukrainian President Petro Poroshenko said he signed a law to terminate the Russian-Ukrainian Friendship Treaty, with the law set to step into effect on April 1, 2019.

"Ukrainian law No.206 'On the termination of the Treaty on Friendship, Cooperation and Partnership Between Ukraine and the Russian Federation' has been signed," Poroshenko wrote on his official Twitter account.

Ukraine's parliament voted not to prolong the treaty last week, with 277 of 450 lawmakers supporting the decision. Poroshenko submitted the bill to parliament last Monday. Kiev sent sent Moscow a letter indicating it did not plan to renew the treaty in September.

The Russian-Ukrainian Friendship Treaty is one of the most important agreements among the several hundred treaties signed between the two countries following the collapse of the Soviet Union in 1991. It promotes the principle of strategic partnership, forbids the countries from declaring war on one another, and recognizes the principle of respect for territorial integrity. Furthermore, the treaty established protections for the citizens of Ukraine in Russia and vice-versa in accordance with the principles of international law.

Generally warm relations between Russia and Ukraine suffered a severe downturn in early 2014, after a Western-backed coup d'etat in Kiev overthrew the country's unpopular but democratically elected president. The unrest prompted the population of majority ethnic-Russian Crimea to vote to secede from Ukraine and rejoin the Russian Federation, sixty years after Soviet leader Nikita Khrushchev transferred the peninsula to Ukraine. In April 2014, residents of eastern Ukraine attempted to organize their own referendums on secession or autonomy, prompting Kiev to send the military to the regions to crush the unrest. Ukrainian authorities accused Moscow of direct military involvement in the Donbass conflict, a charge Russian authorities flatly dismissed for lack of evidence.

© REUTERS / Ukrainian Navy handout
Ukrainian Vessels Have Been Threatening to Use Weapons if Approached by Russian Ships Since August - FSB
Tensions escalated late last month, after Ukraine sent two Navy gunboats and a tugboat into Russian territorial waters in the Kerch Strait near Crimea, prompting Russian border guards to seize the vessels and detain their crews for a two month period. Ukraine responded by declaring martial law for a 30 day period in regions bordering Russia, the Black Sea and the Sea of Azov. Kiev also announced that it would ban Russian males aged 16-60 from entering the country. Russian President Vladimir Putin described Kerch Strait incident as a "provocation," saying it was organized by the current Ukrainian government amid sagging approval ratings ahead of presidential elections next spring.
...
Reddit
Google+
Blogger
Pinterest
StumbleUpon
Telegram
WhatsApp
438
Community standardsDiscussion