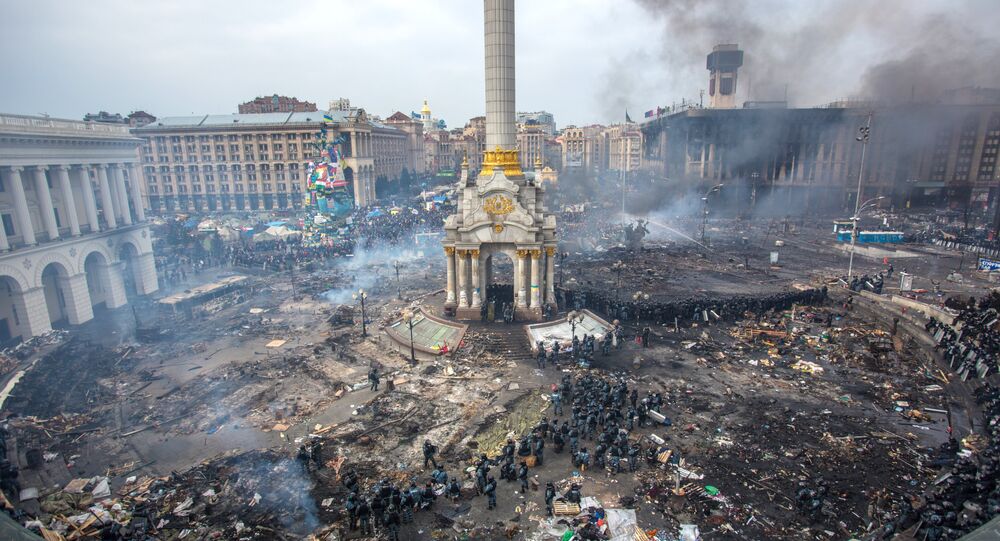 The people of Ukraine will take to the ballot box on Sunday for a presidential election in which Petro Poroshenko is battling to retain power. Leading in the polls, however, is none other than TV comedian Volodymyr Zelenskiy, running on an anti-oligarch platform.

Zelenskiy is suspected of having links to TV channel owner Igor Kolomoisky, an opponent of Poroshenko, who has also been accused of corruption. Sputnik spoke with the founder and president of the American University in Moscow, Edward Lozansky, for insight on the issue.

Sputnik: What do you make of the fact that the front-runner in the polls in Ukraine is a comedian. And to what extent do you think he is backed by Kolomoisky, who of course owns the TV channel his show is on?

Edward Lozansky: Well it proves that the Ukrainian people are disappointed – this is maybe a soft term – they are angry.

Everything that the Maidan revolution promised them – prosperity, a European level of life, integration into the European Union – I don’t think they care too much about NATO because we know that according to all polls, even before Maidan, it’s not so high.

© Sputnik / Mikhail Palinchak
Saakashvili Claims Poroshenko Planned to Swap Crimea for NATO Membership
People in any country mainly care about their well-being and all of those promises were not only broken but actually, the situation is much worse than before Poroshenko took over.

The war is still going on, prices go up, most importantly the price of heating, gas, and electricity. In general, the mood is not very good and people are voting with their feet.

Sputnik: What is it about Zelenskiy that has won people’s support do you think?

Edward Lozansky: The only time people have some satisfaction is when they watch this TV show by Mr. Zelenskiy – this shows the power of TV.

They think that maybe he can perform this miracle and most likely he will win the entrance into the second tour because it’s 100 percent obvious there will be a second tour.

So Zelenskiy has more or less guaranteed his place in the run-off in the second tour.

© CC BY 2.0 / Gnesener1900 / The Ministry of Foreign Affairs of Ukraine, Kiev
Ukraine, US Discuss Cybersecurity of Election System – Kiev
Sputnik: All candidates are running on a platform of ‘de-oligarchisation’: how credible is this given the fact most of their campaigns have been subsidized by oligarchs?

Edward Lozansky: Yes, including Zelenskiy by the way. So whatever they promise, this is just an empty promise. As I said, five years ago they were promised a bright future immediately, now five years later things are much worse.

When I talk to Ukrainians they believe they were fooled and the situation now is much worse, not just worse but much worse than it was, and previous Presidents were of course also corrupt.

So this is the story, it’s unfortunate, I feel very badly for the Ukrainian people; I myself was born in Kiev and I graduated from high school there so I know how the people suffer and it makes me feel really terrible.

Views and opinions expressed in this article are those of Edward Lozansky and do not necessarily reflect those of Sputnik.