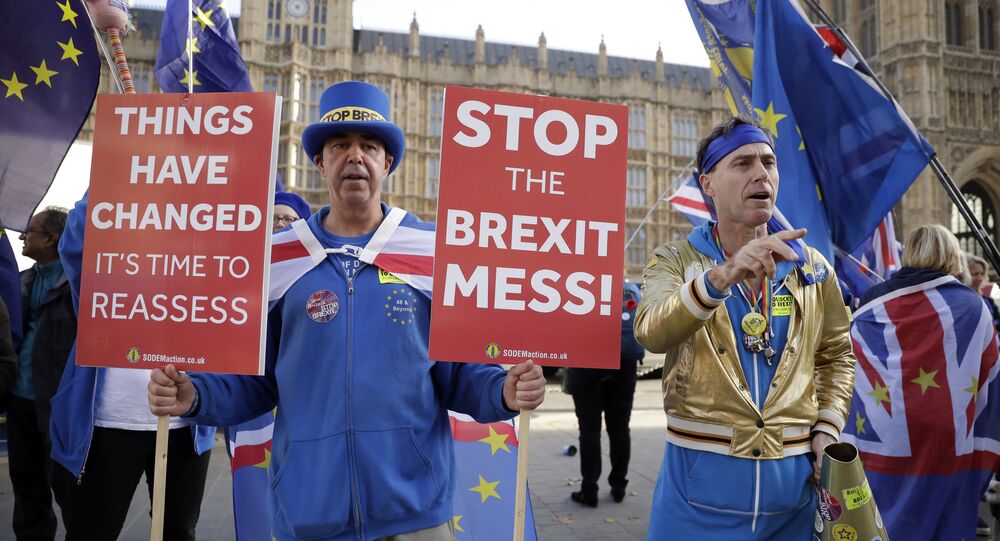 The developments reportedly come after UK Prime Minister Theresa May said in an open letter to the nation that she would campaign "heart and soul" to get her Brexit deal through Parliament, even amid a stiff opposition within and beyond her own party.

The UK's senior cabinet ministers are engaged in secret talks with Northern Ireland's Democratic Unionist Party (DUP) over the so-called Plan B Brexit in case Prime Minister Theresa May's blueprint on Britain's exit from the EU is rejected, according to The Sun.

The hush-hush talks, which are specifically focused on creating a permanent customs arrangement, are expected to infuriate eurosceptic Tory MPs.

The Sun cited a high-ranking DUP source as saying that "the Plan B that people are talking about I think becomes much more serious."

"We are having discussions with people about what happens after this. I don't think No.10 is involved in this. Some of the people who are thinking beyond that are pretty senior people. Serious people," the source pointed out, urging Prime Minister May "to take a different approach" to the Brexit deal.

The remarks came after May said in an open letter to the nation that she will be "fighting, campaigning with my heart and soul to win that vote and deliver this Brexit deal for the good of the UK and all of our people".

"Today, I am in Brussels with a firm intention of agreeing on a Brexit deal with the leaders of the other 27 EU nations. It will be a deal that is in our national interest – one that works for our whole country and all of our people, whether you voted 'Leave' or 'Remain'," May underscored.

She recalled that on March 29, 2019, the UK will leave the EU and "begin a new chapter of our national life."

On Thursday, May again defended a Brexit blueprint in the UK Parliament's House of Commons after London and Brussels completed their draft agreement on Brexit after over a year of negotiation.

The agreement has faced criticism both from the opposition and from the ruling party, with several members of her Cabinet resigning over their disagreement with the deal earlier this month.

© REUTERS / Parbul TV
Hard Sell: Brexit Deal Will Help Young Britons Get Jobs, Training – May
The DUP, in turn, insists that the government should renegotiate the Brexit deal, claiming that the rejection of the existing text would not necessarily lead to a 'no-deal' scenario and implies further work on the agreement.

In the June 2016 referendum, the UK voted to leave the EU, with almost 52 percent of those who voted supporting the move. The UK is expected to withdraw from the bloc in late March 2019 despite a spate of stumbling blocks that hamper the Brexit talks, including the Irish border, the proposed customs union, the Gibraltar issue and post-Brexit UK-EU economic relations.