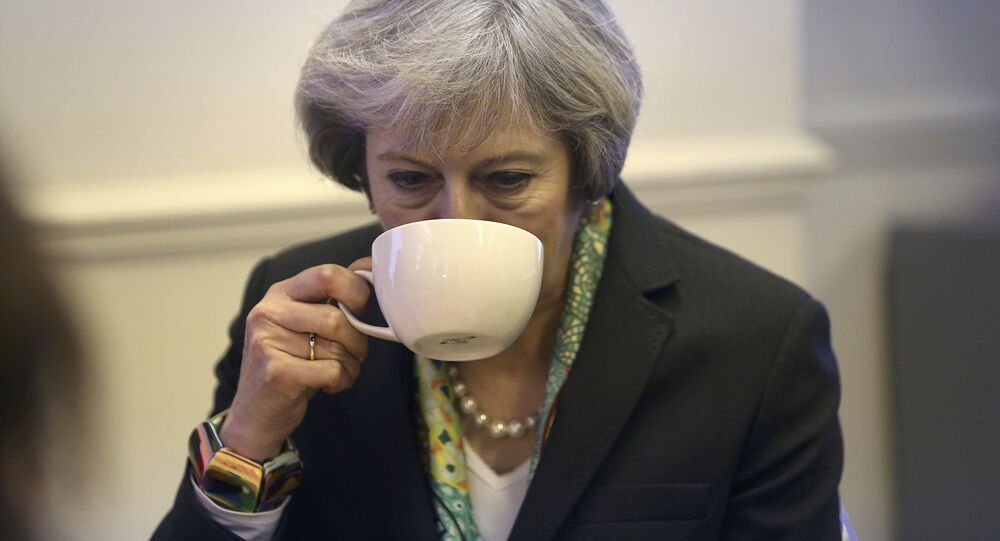 British Prime Minister Theresa May's possible resignation is not completely off the table, Adam Garrie, a geopolitical analyst and director at Eurasia Future, suggesting that the prime minister could bow out at ‘any moment between now and March 2019’.

While British Prime Minister Theresa May has departed for Brussels to apparently make ‘a better deal,' Adam Garrie, a geopolitical analyst and director at Eurasia Future, opines that her resignation would have facilitated Brexit much better.

"May's resignation would have helped as it would have resulted either in a general election that would be a de-facto second referendum on Brexit or otherwise it would install (however temporarily) a new conservative leader who might have to actually declare an opinion and offer proposals on Brexit — something May failed to do before becoming prime minister and something she continues to fail to do while in No. 10," Garrie told Sputnik, suggesting that May still could step down ‘at any moment between now and March'.

© Sputnik
'Anything Could Happen': Minister Claims UK Might Hold Fresh Brexit Referendum if Deal Voted Down
May's draft Brexit deal presented on 14 November has resulted in the resignation of a number of ministers including Brexit Secretary Dominic Raab last week and prompted a wave of criticism from both Brexiteer Tories and some Remainers in the House of Common.

As Tory MP Anna Soubry tweeted gloomily on November 15: "Raab's resignation marks the end of PMs Withdrawal Agreement. This is v[ery] serious the PM will clearly be considering her position. My own view is that we need a Gov[ernment] of National Unity and we need it now".

Indeed, following the string of resignations ‘rebel' Tories came up with a no-confidence vote plan aimed at unseating Prime Minister May. The threshold for a confidence vote has not been reached so far.

However, Jacob Rees-Mogg, the chair of the European Research Group of Eurosceptic MPs, has recently said that ‘patience is a virtue, virtue is a grace and et cetera,' hinting at the possibility of gaining more votes against May.

© REUTERS / Stefan Wermuth
EU is Deliberately Turning 'Brexit' Into True Nightmare for UK – Economist
The question then arises as to what is particularly wrong with the prime minister's draft.

"The problem with her deal is that it is an amorphous pile of nothing designed to insult the EU, British who are pro-EU and British who are pro-Brexit. It's only real test of success will be in seeing whether it can accomplish the only thing it was ever designed to do — keep Theresa May in power for as long as possible," Garrie said.

In particular, observers presume that the deal sounds rather ambiguous with an elastic transition period which seems to be designed to keep Britain within the bloc as long as possible. To add to the controversy Europe's chief Brexit negotiator, Michel Barnier, stated on 18 November that the UK could remain under Brussels' control until the end of 2022.

Game of Thrones in British Parliament

According to Garrie, the recent turmoil in the British Parliament is not actually about the well-being of Britons after Brexit but about power.

"Now it goes without saying that most UK politicians have no principles," the geopolitical analyst opined. "Indeed, the well versed Benjamin Disraeli once called the UK Conservative party 'an organised hypocrisy'. Under May the organisational aspect is largely gone but the hypocrisy is very much front and centre. As a result, conservative MPs will be determining whether their own personal political futures will be better served by backing May's career prospects or by backing those of one of her front line rivals (aka Boris Johnson — the man waiting in the wings like Brexit's own Phantom of The Opera)".

According to him, "the proverbial 'Tory coup' is essentially an attempt by backbench Tory MPs to compete for positions in the future cabinet of a new Conservative leader".

"Those who hesitated clearly expect to be rewarded by Theresa May for their valuable professional loyalty. Beliefs or ethics are two qualifiers that simply do not come into it. It's all open careerism disguised as political theatre," Garrie said.

'Blair and Churchill Knew When to Say Goodbye'

Commenting on the prospects of May's draft Withdrawal Agreement, the geopolitical analyst suggested that "even before her 'deal' gets defeated in the British House of Commons, more and more of her own MPs will pile on the pressure".

"I've frankly never seen someone so attached to power yet someone who deserves it so little," Garrie noted. "Even [former British PM] Tony Blair knew when to say goodbye as did [Winston] Churchill albeit after a protracted late stage career. But while Churchill was a titanic figure and Blair was too in his own ignominious way, Theresa May is a nobody whose only claim to fame is trying hard to appear as though she is somebody".

PM May Says UK 'Steadfast in Support' to Gibraltar Despite Brexit