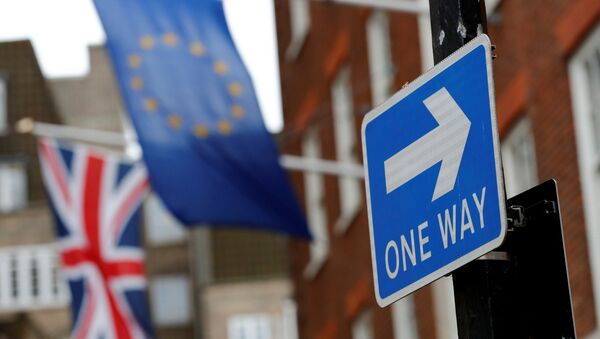 British Prime Minister Theresa May came under a storm of criticism over the draft Brexit Withdrawal Agreement presented on November 14, 2018 which prompted speculations about her potential resignation.

Speaking to Sputnik, Geraint Johnes, professor of economics with the Lancaster University Management School, suggested that although it would be much safer for Britain to stay within the EU, "the withdrawal agreement and political declaration represent a good achievement by the UK negotiators."

"Some information about the content of the draft deal was leaked before the deal was published," the professor noted. "While inevitable, this was not very helpful to those advocating the deal. The deal itself is better than the leaks."

'Clear Sign of Weakness': Spain Warns UK Will 'Split Apart' Due to Brexit
The British academic explained that alternative mechanisms of extended transition and backstop provide PM May "with something to sell to" the Democratic Unionist Party (DUP).

On the other hand, "the arbitration mechanism for the joint committee provides her with something to sell to the European Research Group of hard Brexiteers in parliament," he elaborated, adding that though it is unclear "whether this will be enough to allow her to win the so-called meaningful vote," he believes that "this vote will end up being much closer than many observers have suggested."

Commenting on the calls for May's stepping down, Johnes highlighted that "changing premier would not achieve a better deal."

Looking Closer at the Draft Agreement

The economist shed light on provisions of the proposed agreement, in particular pointing out that "the draft withdrawal agreement does not specify a date to which the transition period can be extended, but it makes provision for it to be extended once."

It was earlier reported that the transition period is due to begin on March 29, 2019 and last until December 31, 2020 with the possibility of an extension.

However, Europe's chief Brexit negotiator, Michel Barnier, has proposed extending Britain's transition period to 2022. According to The Guardian, this proposal is likely to cost Britain billions and further "infuriate" Tory Brexiteers.

"A long limit is useful for Mrs. May inasmuch as she can present the option of an extension as an alternative to adopting the backstop proposals that are anathema, in particular, to the Democratic Unionist Party. The reality of trade deals is that they take many years to negotiate, and this means that either the transition period or the backstop will be in place for several years at least," Johnes remarked.

UK Gov’t Has ‘Seriously Broken’ Its Brexit Promise to DUP – Party Spokesperson
According to the academic, "the issues surrounding the Irish border add complications that are likely further to delay the date at which a comprehensive free trade agreement can replace the transition or backstop arrangements."

On the other hand, the deal appears ambiguous when it comes to the future of relations between the UK and EU, the professor noted, dubbing the process a "blind Brexit."

"The political declaration gives an indication of the direction of travel — moving towards a comprehensive free trade area with considerable alignment of rules that enable minimisation of border disruption. But this is not a legal document, and inasmuch as there is scope for substantive changes to be made to the current position, it is here that the changes are likely to be made. While the intention is clear, this is nonetheless a blind Brexit," the economist explained.

'She May… or She May Not' Complete What Has Been Started

As for Britain's membership in the European Customs Union and the Common Market, Johnes specified that "the deal envisages close customs cooperation and, in the goods sector, the alignment of rules" which "is not quite the same as being in the EU's customs union and the single market."

"In particular, close customs cooperation could, in the longer term, allow the UK to strike its own trade deals with third party countries, although the scope for these to sit alongside whatever arrangements are made between the UK and EU remains to be seen," he said, stressing that "much will depend on the development of solutions to the Irish border issues."

'Brexit Scenario' is a Betrayal of Britons Who Voted to Leave EU - UK Politician
Still, the economist remains sceptical about the Brexit initiative: "In my view — and certainly from the economic standpoint — the UK would be much better served by remaining a member of the EU than by leaving, and in that respect the deal is not a good one," he said.

He has drawn attention to the fact that the Brexit deal "offers nothing for services, which constitute 80 per cent of the UK's economy."

Likewise, Johnes is not sure whether the British prime minister is capable of implementing the much discussed Brexit plan: "As her name suggests, she May… or she May not!"

For his part, Dr Thorsten Polleit, chief economist of Degussa and macro-economic advisor to the P&R Real Value fund, expressed deep concerns regarding the May-promoted draft deal and the EU's handling of the situation with respect to Barnier's latest proposal.

"One can['t] escape the impression that the EU is deliberately [turning] 'Brexit' into a true nightmare for the people of Great Britain," he told Sputnik. "The EU seems to be trying to draw Great Britain into an ‘endless extension of the transition period' spiral — which is of course de facto denying Brexit."

According to the economic advisor, if both parties involved in the negotiations "have the best in mind for the people they represent, they would go for an unconditional free trade regime."

"That would be very easy," he stressed. "It would just take one piece of paper saying ‘Firms and consumers in Great Britain and the EU are free to buy and sell goods and services from each other as they please — without being hindered by any taxes or other trade hindrances."